'Amnesty' book review: A day in the life of an immigrant

Offering a take on an immigrant’s experience, the characters here present different emotions and are also intriguing in their own right.

With immigrants, legal and illegal, in the news, Aravind Adiga’s fifth novel Amnesty is timely. Its characters not only present different aspects of the immigrant experience, but are intriguing in their own right. Danny, Dhananjaya Rajaratnam, a Sri Lankan living in Sydney, is the protagonist.

Danny entered Australia as a student and immediately sought asylum. The reason—he was tortured by the Sri Lankan police who mistook him for an LTTE terrorist—cut no ice with the Immigration authorities who informed him of the state’s zero tolerance towards fraudulent asylum-seekers. Realising that the obscure college he had joined was a ‘rip-off’ and would not help him secure a job, Danny dropped out of the course. He then made an honest mistake—that of overstaying on the now invalid student visa beyond the stipulated 28 days. Result: he is an illegal, “a man without rights in this world”, and must find new ways to live. 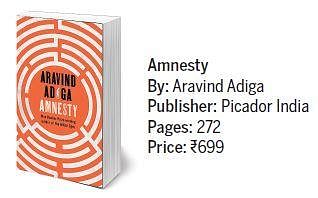 Survival now being his religion, Danny’s holy book is a tome written by a fellow South Asian, on an immigrant’s life. “Many of us flee chaos to come here. Aussies are an optimistic and methodical people and they are governed by law. Understanding the concept of the rule that cannot be broken is vital to adjusting here.”

Keen to give the impression that he was born in Australia, Danny charts out the dos and don’ts. “The tongue of an Australian. Never say receipt with the P. Be generous with I reckon.” He grows his hair, streaks it blonde and acquires a vegan girlfriend, a Vietnamese nurse, who is a legal, but doesn’t know that he is not. The truth about Danny is known only to a few people, including the Greek grocery store owner in the bohemian suburb of Glebe who rents him a room, uses his services in the store and demands a portion of what he earns from his job as a house cleaner.

Living in fear of being ‘dobbed’ or reported, Danny becomes a scrupulous rule-follower. For instance, he never travels without buying a ticket.  As such, he earns a reputation as a model house cleaner, silent and efficient, with enough work to keep him moving from day to day to the steady drumbeat of his resolve: “I am never going back home.” When the novel begins, Danny has had four years to settle into his existence as an illegal.

Starting at 8.46 am, Adiga recounts a single day in his life. “Danny divided the city into two kinds of suburbs—thick bum, where the working classes lived, ate badly and cleaned for themselves; and thin bum, where the fit and young people ate salads and jogged a lot but almost never cleaned their homes.” Erskineville, where he’s working that morning, is the second kind.

While there, he learns of the brutal murder of a former client, a married woman, Radha Thomas. The body was found wrapped in a leather jacket that Danny has reason to believe belonged to her secret lover, Prakash Wadhwa, a gambler whose apartment too he regularly cleaned. These two, a bit like Oscar and Lucinda, extended a sort-of- friendship to the cleaner, giving him free meals—till he quit working for them. Danny is now faced with a choice: should he come forward with the information that will nail the murderer while almost certainly leading to his own deportation, or keep quiet and leave justice undone?

While the premise is interesting, its execution is flawed. The minutiae of Danny’s life is detailed in an almost minute-by-minute account. It allows the reader to get into his head, learn about his past in frequent flashbacks, but it also causes the narrative to be so fragmented that the psychological tension simply peters out. Though it’s 253 pages long, the day is interminably long. Despite this drawback, the novel offers an unusual perspective on a subject relevant to our times.

Now we are on Telegram too. Follow us for updates
TAGS
Aravind Adiga Amnesty

'Remove me if you can': Nepal PM KP Sharma Oli challenges Prachanda

'Rahul, you were on vacation...': Amit Shah slams Congress on fisheries ministry row