The book comes at a time when Pakistani women are raising their voices to reclaim the public space through protests and marches.

After years of resistance, the term 'feminism', still raises eyebrows in the Asian subcontinent. For most, it's confusing, synonymous with misandry or a communist concocted word. Even today, to fight for equal rights for women in a patriarchal world is still an alien concept for the greater number.

Once the world is done with tainting the f-word, the most dangerous question perhaps looms in our subconscious -- who is a perfect feminist?

In the Islamic state of Pakistan, the word brings back memories of a tall political leader, who was assassinated in cold blood -- Benazir Bhutto. This was a woman who revolutionised Pakistan's polity. Although she left a polarising legacy, her achievements are celebrated as a win for Muslim women.

A child star in Calcutta, Wasai moved to Lahore in 1938 and went on to rule the film industry for over 30 years, mesmerising the world with almost 10000 songs and becoming the nation's Malika-e-Tarannum. Her first big break arrived in the form of the film Chan Wey where she not only acted and sang but co-directed with her husband, becoming Pakistan’s first female director. "No mean feat for a woman of her time," writes Amneh Shaikh-Farooqi in her book Fearless: Stories of Amazing women of Pakistan.

The conversation around feminism deviates from its aim when we become oblivious of such women of colour and their fight. Ever since the suffrage, women of colour have been fighting a dual war, one with patriarchy and another for their representation in the movement. 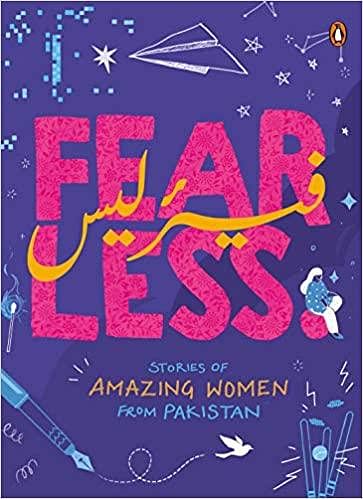 "Over and over research reiterates the importance of diversity in mainstream media, and literature and yet what many of us consume is often restricted to (a) Western construct and aesthetic," Amneh writes in the introduction of her book, acknowledging the lack of representation of women of colour, especially South Asian women in feminism.

"Intersectional Feminism" was first coined by a black American professor Kimberle Crenshaw in her study of overlapping social identities and related systems of oppression, domination or discrimination. Thirty years later, in the subcontinent where identity politics overpowers a woman's life, it's perhaps a matter of shame that the term "intersectionality" has failed to gain a place in our collective consciousness.

In her book, published by Penguin India, Amneh traces the history of Pakistan's women movement and brings to the fore, stories of  50 remarkable women who have over the years aced fields of science, technology, arts and shaped the future of their country. Aziza Ahmad's illustrations breathe life into the stories of these women.

The book underlines through their stories to the world that it's time for the west to acknowledge inclusivity.

Patriarchy finds its roots in Islam too, which binds Muslim women to private spaces, enabling misogynists to oppress women. But in a country where misogyny is so ingrained that for some surviving itself becomes an act of resistance, my kind has been fearless. One can only imagine the gravity of suppression in the early 1900s that has now led to Pakistan ranking third-worst at 151 on the Gender Parity Index of the World Economic Forum.

When inequalities in the field of education between men and women were stark, defying odds, Fatima Jinnah, the sister of Muhammad Ali Jinnah, became the first Muslim woman in Calcutta to set up a dental clinic in 1923. Fatima stood shoulder-to-shoulder with her brother and played a crucial role in the signing of the Lahore Resolution of 1940. After her brother's death, Fatima's voice was suppressed by the military rule of Ayub Khan.

Her death brought six lakh people together who bid "Khatun-e-Pakistan" a tearful goodbye. "Fatima’s courage and determination made her one of the most fearless women of Pakistan. Fatima was often photographed standing next to important men of her period, something unusual for the time; but her message was clear: women need to play a role in society and politics alongside men," Amneh writes.

The book comes at a time when Pakistani women are raising their voices to reclaim the public space through protests and marches. March 8, 2020 marked one of the exceptional days for the country's revolution when thousands of women marched on to the streets of Lahore and Karachi demanding autonomy.

The magnanimity of the march, which faced several challenges, marked a new phase of the feminist movement in the Islamic country. Women, irrespective of their social backgrounds, trans women, everyone came together to raise their voices in unison against oppression, yet in unique ways.

With 'Khudmukhtari (autonomy) and Violence (both sexual and economic)' as this year’s theme, women rallied against patriarchy and its cataclysmic effect.

The concept of bodily autonomy is so frowned upon in Pakistan that it often claims the lives of women who dare to assert theirs. After all, 26-year-old Quendel Baloch, who finds mention in the book, was killed by her brother in 2016, for being fearless in claiming her right to her body.

"No one expected her to become a feminist icon for young women in the country". The country's first celebrity-by-social-media used the platform to "push the conversation around how women were expected to behave in public. She used her celebrity status to empower women," Amneh writes.

"As a woman, we should step up for ourselves" she roared. She extended her voice to empower the younger generation till one day she was silenced by patriarchy.

The 'aurat march', which should have been appreciated by the country by and large, instead rattled the far-right, including their Wazir-e-Azam Imran Khan.

Khan termed the struggle of Pakistan's women a western concept and added, "I disagree with this western concept, this feminist movement, it has degraded the role of a mother. My mother had the greatest impact on my life."

The march notably took out pidarshahi ka janaza (funeral procession of patriarchy) among other things.

In Islam, women are barred from being a part of the funeral procession. And such sexism transgresses borders. While some of us privileged lot suffer less in the hands of patriarchy, the less fortunate battle for their existence every day. Having said that, in the intellectually progressive state of West Bengal in India, I too was barred from being a part of my mother's janaza.

Although the far-right doesn't acknowledge it, the women's resistance in Pakistan isn't new. In 1960, the All Pakistan Women's Association (APWA) became the face of the women's movement in the country. The passage of the Muslim Family Laws Ordinance, pushed by APWA, created a ripple.

Over 30 years ago, when Zia-ul-Haq proposed the "Evidence Bill", which suggested that the evidence of two women should equal that of one man, it was these fearless women of Pakistan who created history by standing up for their rights despite facing the brunt of police action.

Every woman is a novel in herself, every step is an act of resistance and while the book salutes the revolutionaries, it's women like Amneh Shaikh-Farooqui, Aziza Ahma, Girls at Dhabas, Malala Yousafzai, Mukhtaran Mai, are carrying the inclusive feminist struggle forward. Perhaps, for a woman, to be fearless, is the only way to survive.