A struggle for identity, the courage to stand up to the oppressor, violence and more pepper the pages of this unique story.

Malayalam author S Hareesh’s oeuvre, comprising three short story collections and two screenplays, has earned him several prestigious awards. However, Moustache, his first novel, is a tour de force of jaw-dropping authenticity. In page after page, the word becomes the world. The language creates a magnetic field that pulls everything in—the landscape, its stories and the reader.  Set in Kuttanad, a low-lying delta region formed by five rivers that flow into the longest lake in India, the story is about the strange otherworldliness of a watery panorama and all that breathes within. This includes humans, of every ilk, and the power play that governs their lives. 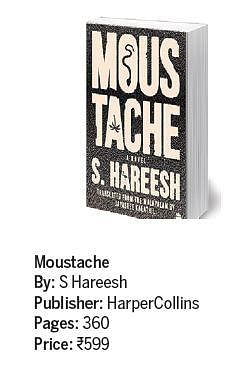 Yes, caste tension is central to the story. It is, in fact, the story.In the first half of the 20th century, at the time the events unfold, there is a hereditary ruler in place, presiding over a feudal society. Brahmins at the top. Then come, with varying degrees of social power, landowners, goldsmiths, blacksmiths, woodworkers, oil sellers, barbers, fisherfolk—each possessive about their ways of living. Way, way down are the utterly powerless, the Dalits—the Pulayans and the Chovans. Landless labourers, toddy tappers, in the large numbers needed for farming, they are not paid in wages but given a paltry share of the crop. It’s never enough and Vavachan, the hero of the novel, a Pulayan- Christian lad from a family of six children, spends daylight foraging, sleeps hungry, dreams of a full stomach. There is nothing else.

Vavachan’s life changes when a drama company, staging a play, looks around for someone with a moustache for the part of a policeman and finds no one suitable other than Vavachan. ‘Like all men of the Pulayan caste, he was coal-black, as though he would turn water black if he entered the river, as though, if like a dark spirit, he jumped up and touched the sky, black rain would fall.’ Despite fears that the audience will boo if a low caste is made a policeman, the role becomes his and the thick, strong facial hair is reshaped to create the moustache. The scene requires no dialogue, but when the policeman appears the audience is electrified. ‘Those who sat in the front rows felt that their age-old fear of mythical, discarnate beings of darkness, such as the Rakshas and the Makkan, had finally taken physical form and appeared before them.’ He utters just one word, ‘Da…!’ and they flee en masse.

Performance over, Vavachan is reluctant to part with the moustache and this the upper castes deem an insult. A manhunt is launched. Vavachan scarpers, melting into the landscape, hiding in the waterways. His moustache grows, gaining a supernatural persona of its own. ‘A school of rosy-red minnows swam through his moustache without making a single ripple in the water. Pregnant fish quietly considered the suitability of its denseness to lay their eggs, assuming that it was the tangled roots of canal-side trees.’ Like the magical moustache, the story, abandoning all notions of a conventional narrative arc, sprouts in all directions, presenting a primal world of animals, fish, plants, birds, spirits, desires. The vision has a childlike freshness to it, but that is misleading.

Beneath the lush beauty of the language lie tales of violence, of unspeakable cruelty. A woman is raped. And then gang-raped. Another dies, alone, of snake bite. Dirges flow through these pages. In the irony of it all, there is the profound loneliness of the moustache as it struggles to rescue its life, to evade oblivion. ‘Each of us is made of the stories that are told of us. If we look carefully, we can see the train of murmuring stories following each person like the royal mantle follows the advancing king. Some people are not flesh and blood, but fully made up of stories.’

Though challenging, this novel, skilfully translated by Jayasree Kalathil, is a most rewarding read.