'My Years with Rajiv: Triumph and Tragedy' book review: A friend remembers

This book is perhaps best described as a tribute as the words are dipped in feelings of adoration, nostalgia and a profound sense of loyalty.

Wajahat Habibullah’s My Years with Rajiv: Triumph and Tragedy is an intimate portrait of Rajiv Gandhi, the man who became Prime Minister in 1984 at the age of 40. It is based on the author’s extensive recollections involving the protagonist of his book. They knew each other as young boys studying at Welham Boys’ School and the Doon School in Dehradun. Thanks to the personal and professional ties between their families, this friendship continued into adulthood. Eventually, Habibullah also ended up serving as joint secretary in the Prime Minister’s Office, and the boy who was one year his senior at school became his boss. 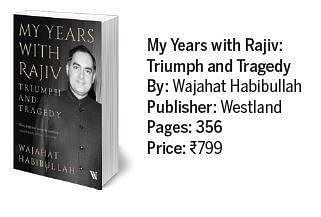 This book is perhaps best described as a tribute as the words are dipped in feelings of adoration, nostalgia and a profound sense of loyalty. The author’s intention is to celebrate Gandhi’s contributions and legacy, not critique his blunders and miscalculations. This honesty is worthy of appreciation because authors are often reluctant to acknowledge their biases. Habibullah makes no attempt to hide his proximity to Gandhi. His very objective is to make available a rare ringside view that can only come from someone close and trusted. Readers who expect this book to be an objective biographical account are bound to feel disappointed.

Habibullah does not shy away from addressing Gandhi’s “controversial decisions such as the agreements made with neighbouring countries and within India with different separatist groups, the unlocking of the Babri Masjid-Ram Janmabhoomi, the Shah Bano amendment, the handling of communal riots, Operation Brasstacks, and others”. Having served as former chairperson of the National Commission for Minorities, the author can certainly not afford to be silent on these matters. Unfortunately, he tries a bit too hard to absolve Gandhi and pin the blame elsewhere. In the bargain, he makes the former Prime Minister appear more incompetent rather than innocent.

Going by Habibullah’s account, in February 1986, when the gates of the Babri Masjid were unlocked, Gandhi was utterly clueless about what was going on. Apparently, he told Habibullah, “I had not been informed of this action, and have asked Vir Bahadur Singh to explain. I suspect it was Arun (Nehru) and Fotedar (Makhan Lal) who were responsible, but I am having this verified. If it is true, I will have to consider action.” The fact that such a major development had taken place without Gandhi’s knowledge or consent raises questions about his leadership and the faith he placed in his associates. The book includes other instances when Gandhi was supposedly kept in the dark.

The finest moments in this book are to be found in Habibullah’s description of Gandhi as a friend. In March 1991, after the author was shot at outside the Jami Masjid in Srinagar, Gandhi sent him a package containing a bulletproof vest. Habibullah writes, “Years later, when I asked Sonia (Gandhi’s wife) whether it was an old vest, she informed me that no, it was his only bulletproof vest that he had been advised to wear always but rarely did.” The book is filled with anecdotes about the warm relationship he shared with Habibullah, who was devastated when Gandhi was killed in a blast as revenge for “having sent the Indian Peace Keeping Force to Sri Lanka in 1987”.

He had lost not only his colleague but a man “who remained a friend until the end”.

Now we are on Telegram too. Follow us for updates
TAGS
Wajahat Habibullah My Years with Rajiv Rajiv Gandhi