'Breathing here is injurious to your health' book review: Confronting the silent scourge

Hardly anyone seems to care about the slow poisoning of an entire population, but the author of this compelling work does

This book appears in the mail box on a day the air quality index (AQI) in many parts of my city hits the ‘very poor’ range of 300 and above. We have become inured to such news, more so with the Covid backdrop, just as we fail to protest when some neighbours begin to assault our eardrums with the noise of diesel generators pumping black smoky death into the air we breathe. That twin assault of noise and deadly particulate matter, the finest (PM 2.5) of which enter our lungs and from there surreptitiously into the blood stream and organs, triggering various diseases, forced me to confine my elderly parents to the part of the house farthest from this threat.

Hardly anyone seems to care about the slow poisoning of an entire population but the author of this compelling work does, as she makes a spirited attempt to grapple with the wicked problem of polluted air. 'Breathing Here is Injurious to Your Health' begins with the very personal story of Lavakare’s mother who is diagnosed with Stage IV lung cancer like hundreds of others who live and breathe Delhi’s toxic fumes. As the mother’s condition quickly deteriorates, the book flashbacks a decade to the daughter and her family’s move back to Delhi from a cleaner Palo Alto and the beginnings of Lavakare’s determined crusade to record, understand and engage with the many-faceted issues around air pollution in India.

Brilliantly narrated with a rich literary flavour and keenly observed characters and situations, this persuasive account weaves the story of the journalist-author’s family with her role as an activist in spreading awareness and advocating for clean air. In this often difficult and sometimes rewarding journey there are friends and fellow travellers, and she discusses the untiring efforts of people like Genevieve Chase, the environmental lawyer Gopal Sankaranarayanan of the successful ‘firecracker ban’ petition, the New York Times correspondent Gardiner Harris among others who helped to foreground India’s scary story of toxic air.

Change takes time and progress is slow as Lavakare and other like-minded people come together under the platform of Care For Air (CFA), a civil society group which relentlessly pursues dirty air through its awareness efforts in schools, litigations, media activism, partnerships and by forging networks using hashtags like #MRTB (My Right to Breath). Brimful, but never overwhelming, with relevant information from a variety of sources including doctors, government agencies, researchers and media, supplemented by an extensive endnotes and resources section, this book is a solid introduction to India’s air pollution problem for ordinary citizens and activists alike.

Pointing out that there are 70,000 scientific papers linking air pollution with harm to human health, Lavakare mentions a 2018 Lancet study, which says ‘India’s dirty air killed an astonishing 1.24 million people in 2017’. Blending journalistic detachment with the passion of someone who lost one of her nearest to the silent scourge of dirty air, she reminds the reader that pollution shaves off anything between 4.3 (average) and 10 years (Delhi) of life of every Indian, easily measured by the useful tool AQLI. If this doesn’t shake us out of our stupor, what indeed can? 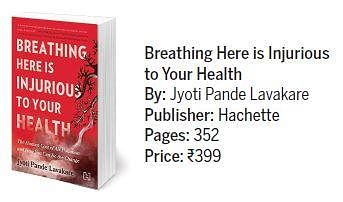 Particulate matter and toxic gases that poison our air come from a wide range of sources, right from the humble cow dung cake fuel of rural India to the emissions of factories, power plants, vehicles, agricultural and urban waste incineration, firecrackers and much else in between. Tackling all this requires innovative solutions and coordinated policy effort piloted by a political will to put the health of people before all other considerations. The author’s experiential learning and carefully documented interviews of clean air champions provide a nuanced portrait of the complexities of the issue while underlining potential targets and effective strategies for advocacy, awareness and partnership efforts.

‘Lazy citizens make lazy governments’, writes Lavakare in the final pages and if we take just one message from this inspiring book it should be in the understanding that our right to breathe clean air won’t be handed to us on a platter—we have to walk that extra mile to demand and fight for it till the wheels of the clean-up juggernaut are set in motion. To confront the killer lurking in the air we breathe, read this book.

Now we are on Telegram too. Follow us for updates
TAGS
Breathing Here is Injurious to Your Health Jyoti Pande Lavakare Delhi Air pollution Air quality