A maverick’s fight with the powerful & corrupt

Sanjay Dhingra is a rumdrinking maverick inventorentrepreneur whose rivals are all out to destroy him, unleashing power, seduction, theft and forgery.

Sanjay Dhingra is a rumdrinking maverick inventor-entrepreneur whose rivals are all out to destroy him, unleashing power, seduction, theft and forgery. But Dhingra has an ace up his sleeve; something so bizarre that can change his fortune in a single stroke. This is the plot of retired Navy man Naveen Kundra’s recently released debut drama book Night Watchman Pvt Ltd, published by Notion Press.

“For the uninitiated, it is a guidebook on the government procurement process. It reflects what is happening around us even though it may appear somewhat exaggerated. Through it, I want to highlight quite a few things. First, the system’s power, which crushes anyone who tries to defy it. 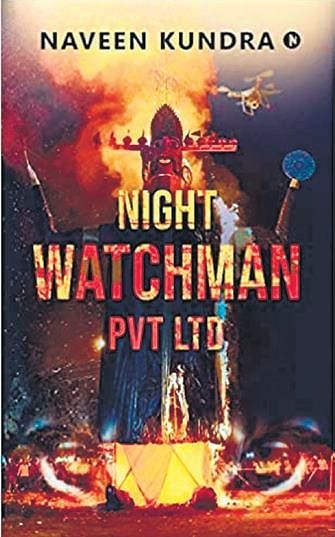 Second, every person is a victim of his/ her circumstances - circumstances can change love into betrayal, loyalty into treachery and a friend into a foe. But the foremost thing is that the survival instincts of human beings keep the world going,” says Kundra, who retired from the Navy as a commander five years back after a service of 25 years. The impulse to write this book was provided by a bad hangover, laughs the 47-yearold. “On a serious note, I like to write and read.

There was a time when I used to read two novels a day -- one under sun and other under the moon. Later, some friends and colleagues who had seen some of my work encouraged me to write,” says the former Navyman who now works as Vice President-Sales and Delivery, Athena Security Solutions. The events in the book are somewhat inspired by real-life incidents and people.

She is young and kind-hearted yet manipulative and ruthless. I had to use my imagination to create her.” The book highlights the nexus between the government, businesses and power brokers. “I am most comfortable writing things close to reality and what is happening around me. I am also a politics aficionado, and the working of government machinery excites me.

This subject also allowed me to be sarcastic about stuff that I really feel strongly about and which I think must change,” says the author, already planning his second book. “It’s shaping up in my mind and I have also thought of the title, Happy New Year,” he concludes.

Now we are on Telegram too. Follow us for updates
TAGS
Night Watchman Pvt Ltd Naveen Kundra