Do you like your tea black, green or purple?

Three Bengalureans are trying to revive teas that Indians once had before the British Raj decimated them.
They are starting with the purple tea made from a tropical flower.

BENGALURU: Green tea is a fad in the city but it may soon be replaced by purple tea. Three Bengalureans – Adarsh Kashyap, Abhishek Nagarkar and Avinash Cheluvaraja – are on a mission to bring back the many teas, starting with the purple variety Indians used to have before the British introduced the commonly consumed fermented tea.

Their company, Eco Addiction, sells the tea leaves and bags through various retail stores and serves the beverage (hot and cold versions) at different cafes such as Bundar in Koramangala.The purple tea is prepared from a tropical flower, butterfly pea, which resembles the female genitals and is dark blue in colour. Its powdered version is also used by watering holes in the city to make mocktails and cocktails, say its producers, who farm this flower in Malavalli (about 100 km from Bengaluru). 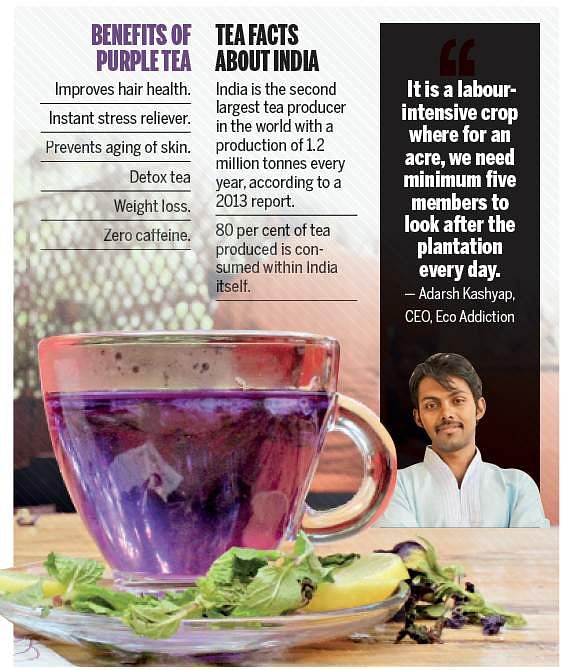 Within a few years, green tea has tapped `50 crore sales, and is increasing at 60 per cent in India. But Adarsh Kashyap, CEO, Eco Addiction, says a lot of people are now discontinuing having it due to its bitter taste, caffeine and presence of nicotine. People always look for something healthy as well as tasty, and that's why he started looking for different kinds of tea. On the other hand, purple tea tastes sweeter than green tea.

But Susmita Das Gupta, founder of the group Its Our Cuppa Tea, says it would not be right to compare purple tea with green tea. "Tea is not a remedy. They have some health benefits depending on the way you drink it. Benefits of black and green teas are about the same, but the minute you add milk to black tea, its properties change." She feels people generally experiment with new variants of tea for novelty, not for their health benefits. "Health benefits would be the fifth or sixth reason to buy it," she says.

The company claims to be the only producer of this purple tea in the country. Adarsh says, "We used to grow a lot of different kinds of teas before the East India Company introduced fermented tea. We want to bring back the era of those teas that were grown and used in India hundreds of years ago, but were suppressed by the British rule."

It is mainly produced presently by tea growers in Kenya. According to a news portal, a scientist from Tocklai Tea Research Institute (TTRI) has revealed that the Kenyan purple tea originated in Assam, and that these tea bushes can still be found there. He is quoted as saying that since the tea originated in Assam under the British rule and with scientists working in India migrating to Kenya, most of tea cultivation practices used in the country are of Indian (Assamese) origin.

The plant is a perennial creeper and takes about six to eight months to grow to about three feet and reach the production stage depending on water and weather. "The crop is like the rose plant that gives flowers almost every day. It needs trimming like the rose and wiring like tomato plants, but purple tea crops need more space to grow." Hence, once the plant grows, one may not find weeds, as the plant occupies majority of the space. "Initially, weeding needs to be done every 15 days," mentions Adarsh.
It is a challenging task. He says, "It is a labour-intensive crop where for an acre, we need minimum five members to look after the plantation every day. We get more harvest from April to June. Rainy season is not good for the crop as it affects drying of the flowers. It takes about two to three days for drying. Once it dries, the weight of the flowers reduces from say 10 kg to 1 kg."

Abhishek Nagarkar, mentor-chief adviser, says, "The flower is edible too, or it can also be powdered and filled in tea bags. The processing and packaging happens at the manufacturing unit in Hassan. Now, the tea is available in cafes in the city and we do corporate sales. It will be available at retail stores such as MK Ahmed and Nilgiris from the first week of March."

Adarsh collected seeds from Thailand. "I collected about 6 kg  of good seeds for almost a year in 2014. Not all seeds would lead to plant growth."He took an acre of land on lease in Bidadi in 2015. He says, "The lease expired recently, and so, we shifted the production to a six-acre plot in Malavalli." Abhishek adds, "It can produce about six tonnes of the product annually."Adarsh also did a pilot survey by going to colleges. "The students liked the tea and said they would try it for the love of its colour and taste," he says.