Taking a tasty ‘wok’ through China

On a rainy Thursday night, we went to get a taste of China at popular restaurant chain — Mainland China — on Church Street.

BENGALURU:On a rainy Thursday night, we went to get a taste of China at popular restaurant chain — Mainland China — on Church Street. The menu, which they change every two months, gives customers a delicious peak into the various flavours, textures and styles used in Chinese cooking.

For starters, we were served the Chicken Peppery Lemon Soup, which had a strong flavour of lemongrass, and was comforting on this rainy day. Once the soup was devoured, we were overwhelmed by the variety of starters that were put in front of us. Edamame Dumplings with Truffle Oil, Cottage Cheese with Chilli and Soya, Wok Tossed Tofu Hunan Style, Crackling Spinach and Stir-fried Vegetables in Thai Basil Sauce were some of the dishes we tried. The Crackling Spinach has been a constant at Mainland China, and is a-must try for vegetarians. While there were other vegetarian starters as well, the repetitive use of the same ingredients had us wanting to break away from this monotony. We also tried the Crispy Lotus Stem with Curry Leaves from their special menu, and this was the star of the meal. 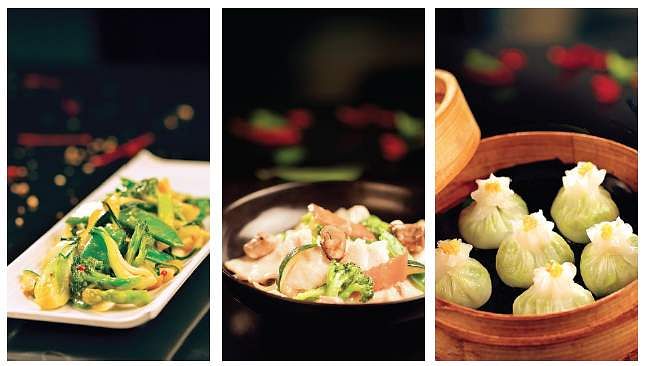 For meat lovers, the Fish in Dragon Chilli Sauce is an absolute treat to the taste buds. Other than this, the Chilli Chicken was also suggested, and though well-made, it still did give out those strong 'chindian' vibes.
The Vegetable and Edamame Fried Rice, which started off the main course dishes for the night, was light on the stomach but strong on flavour. The rice was paired with the Braised Chicken in Smoked Chilli Sauce, Vegetables in Thai Green Curry, and Exotic Vegetables in Black Pepper Sauce, all of which were impressive.

The meal came to an end on a chocolately note. The Chocolate Dome, which falls apart when hot chocolate sauce is poured over it to slowly reveal the ice cream, caramel and some popcorn, was heaven on a plate, but nothing about it screamed 'China'. The quick service and polite staff score were definitely plus points.