India, the third largest producer of coffee in the world, started a small scale production of this variety in Kodagu in 2017.

BENGALURU: Sipping on coffee made with cat poop at The World Cafe, World Trade Center while enjoying a view of fountains from the glass structure of the cafe was nothing short of an ‘on top of the word’ experience. Civet Coffee, said to be the world’s most expensive coffee, is a premium coffee produced uncommonly by a Civet cat and is consumed widely in Gulf countries and Europe. It is prepared with beans that are eaten and then defecated by the animal. The droppings are then collected and the coffee beans are washed, lightly roasted, ground and brewed.

India, the third largest producer of coffee in the world, started a small scale production of this variety in Kodagu in 2017. And this cafe, also sources the coffee from Kodagu. 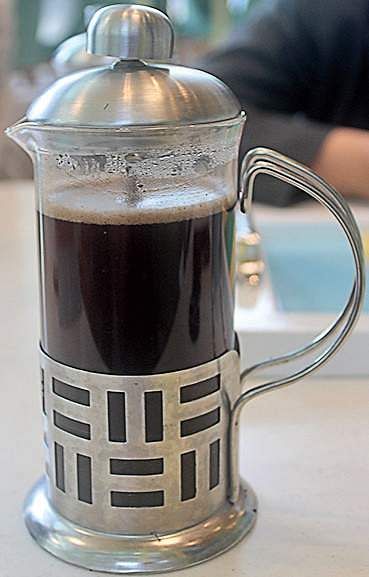 The black coffee has distinct aroma and flavours. The manager tells us that the coffee is brewed with French press at the cafe and is usually served black. But if you are not a fan of black coffee, you could give it a try with milk. But we would suggest having the coffee black as otherwise, the flavours of the coffee get overpowered by the creamy taste of milk.

While you sip some coffee, you could also try some delicacies at the cafe. The menu can be customised as per the preferences of customers. All the hot and cold beverages can be made with full fat/ skim/almond/ soya/ lactose free milk. Most items on the menu change every month. The Smoked Atlantic Salmon is a must try. It is a burger packed in colours - the pinkish beetroot bun in which it is served; the greens of the veggies and orangish salmon. It is made with lime and dill scented cream cheese and mayonnaise. However, the Tuna Nicoise in Herbs and Olive Focaccia Bread isn’t as good as its salmon counterpart. Though it is a fresh and healthy recipe, it tastes bland and lacks some salt.

The Veg Salads include a salad made with quinoa and pearl barley, avacado, cherry tomato, extra virgin olive oil with cilantro, broccoli feta, sundried tomato and ranch dressing. It looks bright, colourful and appetising. It is topped with some bell peppers. The cold oatmeal-like salad tastes fresh, citrusy and mint like. The cold broccoli adds a bitter crunch to the nutty quinoa salad.

Be careful while you take a bite of the Paneer Tikka Salad in Masala Panini Bread as the mustard sauces oozes out. The soft paneer, crunchy lettuce and slight spice of the masala make a great combination. The Greek Feta and Veg Wrap in Tortilla tastes refreshing and healthy. The veggies such as cucumber and bell pepper wrapped in a thin tortilla has crunchy freshness in every bite. It has ample amount of feta cheese and sour cream too.

If you are a fan of hot chocolate, try the variant with nutella at the cafe here in which the nutella in the hot beverage stands out. The beverage is heavier than its other variant called Classic Hot Chocolate. It tastes creamy and sweet, and one can tell that it’s prepared by blending lots of chocolate in hot milk.
The cafe also serves some coolers. The Dry Fruit Smoothie contains dry fruits, milk and vanilla syrup. The thick smoothie tastes predominantly of almonds. It also has nutty shreds of the dry fruit added to the smoothie. The Kiwi Banana and Chia Seeds has an overpowering sweetness of banana except a slight crunch added by chia seeds.

Baked Chocolate has three layers of chocolates. It is topped with a coffee-flavour like creamy chocolate, followed by layers of sweet and bitter chocolate. It tastes so good that you may not stop at one spoonful of it. It leaves you craving for more. The Banana Bread, unlike at most places, is real soft and served hot.

More from Food.
Now we are on Telegram too. Follow us for updates
TAGS
The World Cafe