Fusion from spas in the kitchen

Quinoa upma, home-grown lentils and boiled veggies, almond muesli ice-cream may sound futuristic but these staples of spa cuisine are healthy, tasty and have become trendy, too

When you hear the phrase ‘spa cuisine’, you may think of gastronomic luxury in the middle of a massage. Wrong. Spa cuisine has caught on with health-conscious youth in Hyderabad to describe organic, healthy and rejuvenating food. Organic farms, exclusive restaurants and subscription meals have caught on to this wellness conscious market.

What is spa cuisine?
Spa cuisine boasts of a few parameters—natural and seasonal ingredients, uncomplicated cooking processes, and high nutrition. Although many restaurants and web meal delivery services do not label it so, the cuisine is seriously catching on. Abhiram Agarwal, owner of Sante Spa Cuisine restaurant, says, “People associate spas with massages, but it also corresponds with rejuvenation. Spa cuisine is food that detoxifies the body. It is clean, organic, nutritious and healthy.” Home-grown ingredients have become  a lucrative business as more and more people realise the ill effects of chemicals in food. Sage Farm Café, which delivers healthy meals cooked with pesticide-free ingredients grown on the farm, has become synonymous with healthy  eating. Hyderabadis subscribe to the cafe’s pre-ordered meals, which are, as actress Lakshmi Manchu says, “Yumminess!”

How does spa cuisine benefit you?
Meenakshi Pamnani, a social media influencer and a blogger, cannot stop gushing about the change in her food habits. “A few weeks ago, I realised that I was having a lot of junk food. I looked for a change and got a subscription for Fitmeals, which sends pre-decided organic meals to clients. I feel much more energetic now. I do not like going to the gym, but I love to run. After I began having spa cuisine, my usual four-kilometre run has gone up to seven-kilometres. In fact, when I tried normal meals, I felt sick.”

Is spa cuisine tasty?
Nutritionists have often held that healthy food is not bland. Agarwal says, “I can bet that anyone who tries spa cuisine will love it.” Meenakshi insists that she doesn’t compromise with taste. “For instance, the last meal I had was paneer with brown rice, channa pattice, a bowl of sauteed veggies finished with an oatmeal smoothie,” she says. 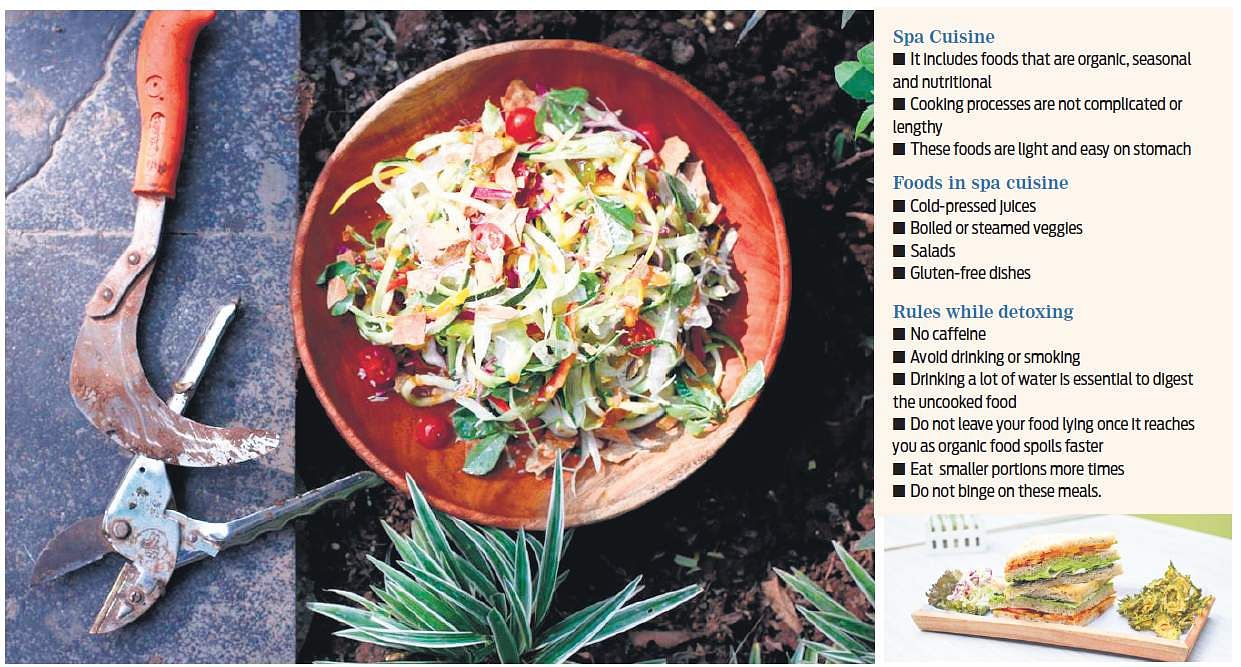 The right portions are a part of the experience. Abhiram says, “Our restaurant serves perfect-sized portions of every dish. It’s just the right quantity for you, which will  make you feel full but not heavy.”
No, it is not just salads

Since Indian cooking has a lot to do with deep frying with generous amounts of oil and heavy masalas, the presupposition is that healthy food has limited options. But Agarwal says, “We do not compromise on taste and innovation. Which is why we experiment with novel dishes like quinoa upma and quinoa biryani. Spa cuisine also includes desserts—gluten-free baked yogurts, almond muesli ice-cream, coconut oil toffees and so on.”

Nutritionists also approve of spa cuisine. Dr B Janaki, a Hyderabad-based food and nutrition expert, says, “Pesticide-free and preservative-free cooking will keep your system free from extra effort to needed to digest heavy food. It is the reason one feels lighter after eating healthy.” Sante Spa Cuisine has also opened shop in Pune. As health becomes big business, new genres of cooking are expanding lifestyles and contracting waistlines.