'Breastfeeding in COVID times is not an absolute no'

A new survey by Momspresso reveals that 93 per cent mothers are concerned about breastfeeding their baby during the pandemic.

A new survey by Momspresso reveals that 93 per cent mothers are concerned about breastfeeding their baby during the pandemic. A total of 800 working and non-working mothers between 25-35 years and 36-45 years participated in this pan-India weblinked survey. It is impossible for a new mother to practice social distancing with their infant, informs Dr Nitika Sobti, Principal Consultant, Max Hospital, Gurugram.

However, she adds that breastfeeding in COVID times is not an absolute no. “We have to take precautions. Even if there’s an emergency, we can provide the COVID test, whichgives the report within 30 to 40 minutes. So, we are sure of the status before putting the baby to the mother’s breast. We shouldn’t worry if the mother is COVID positive because precautions such as hand hygiene, face mask and visor, during breastfeeding can be taken.

Expressed milk is absolutely safe and with the motherly touch. Studies have revealed that the virus it is not present in the breast milk or amniotic fluid.” The survey also revealed that four out of five moms feel that infants who are breastfed are at lower risk of COVID-19 infection, and that this milk contains antibodies that make the babies more immune.

The survey also revealed that nine out of 10 mothers breastfeed their baby to improve his/her immunity, and four out of five mothers breastfeed them to fulfil his/her nutritional requirements. Though 99 per cent of them believe breast milk may protect the baby against infectious diseases, a staggering 93 per cent mothers feel uncomfortable while breastfeeding their children in public places due to lack of breas t feeding facilities. Gurugram-based mom blogger Kavita Bali says that though many malls have feeding rooms, you won’t find such spaces in other public places. 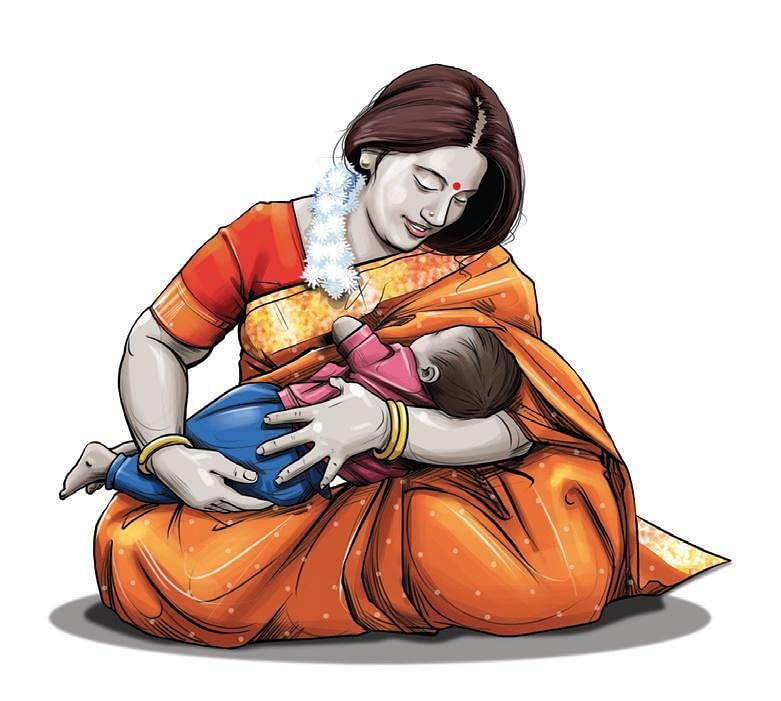 “The government is not doing much to set up baby care rooms,” she adds. When asked about the barriers to breastfeeding comfortably in India, 53 per cent of the respondents cited the lack of hygienic, appropriate or safe spaces, while 47 per cent said the lack of privacy and constant staring are big hurdles. “I have never felt ashamed of feeding my son in public places, but there are women who do. Whenever I had to feed my baby while shopping, store employees were kind enough to help me out.

There are people who think it’s a beautiful thing to feed the baby. But, I have observed that people abroad don’t appreciate moms feeding in public,” Bali adds. Dr Sobti observes that women in the villages freely breastfeed their babies anywhere. But in the urban India, it has to be done in a manner that is acceptable. “We need to raise the consciousness of people because breastmilk will prevent infant mortality. Even one top feed makes the baby prone to infection, ARI, bronchitis, and weakens the connection between the mom and the baby.

The government has been working on it, but it has to come out as a law and policy. If smoking can be prohibited in public places, a feeding room is a very simple thing to be set up,” adds Dr Sobti. Momspresso’s Founding Partner, Parul Orhi, says, “Our breastfeeding survey has always been about starting conversations about the challenges breastfeeding moms face and impacting action to make a change. This survey is a first step towards identifying the challenges and initiating conversations that can address their concerns.”

More from Health.
Now we are on Telegram too. Follow us for updates