That is all part of nature’s mechanism, the helping hand of nature to intensify the practice of this one thought.

All success in life is due to sustaining a single thought. Contrarily, all failure in life too happens due to the inability to sustain a single thought, purpose and goal. Pursuit of success is a common goal for most people as success gives happiness.

What is success? It is a very simple equation. If I have a thought in my mind and I wish to see that thought expressed in the world outside and if it does happen eventually, then I am successful. All our training in fine arts and music is an effort in this direction of successfully employing our thought in the world outside.
Take a musician for example.

She may be constantly practising some songs and movement of voice in some notes all the time. It is nothing but training for the mind to follow a pre-ordained channel of thinking. The person might be singing in Kalyani, Shankarabharanam or Riti Gowlai. The effort is to divert the flow of energy in a channel to produce that similar kind of music that has been conceived of in the mind. 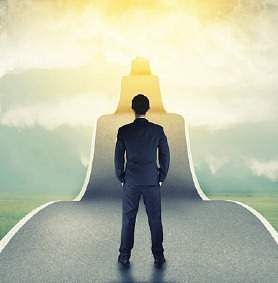 In the case of art too, the process is the same. The artist visualises an image in the mind. He takes a canvas, makes the sketches, fills up with different colours the strokes that he has made.

When the mind through painting, music, cooking or gardening is trained to flow steadily in the given direction, it becomes steady. A steady mind means thought that is unwavering. When a thought does not flicker and it is focused on an action, then it brings an abundant stream of energy and carries the project towards success.

When the power of mind is harnessed—whether it is in one’s individual life or in the collective life of a nation—there is nothing but success. Success becomes a routine in such countries that consistently employ thought in the right direction, that it can even become normal. This accounts for why some countries seem to bag more Olympic gold medals or win a predominance of Oscars and Nobel prizes. It is all in the power of thought.

This power of thought is quite a singular practice. In Yoga, Patanjali Maharshi terms it Eka Tatwa Abhyasa—practice of one thought. When that is employed to the exclusion of other thoughts, then you are on the road to success.

What of the different obstacles such as health, negative comments by others, wounding words and failures? That is all part of nature’s mechanism, the helping hand of nature to intensify the practice of this one thought.

Those are signs to show that our one thought practice is getting weaker. When you want to do something and someone intervenes to say no, you must understand that in this world where you are alone, the obstacle is nothing but your own mind strengthening your own goal. It only helps you to put in intense effort in the same direction.
(www.sharanyachaitanya.blogspot.in)