Some people criticise devotion and prayer, calling it a mere display of emotion.

Some people criticise devotion and prayer, calling it a mere display of emotion. They view singing bhajans and praying out loud, as a show. People who criticise in this manner have simply not understood the principle behind prayer. Prayer does not mean putting out a list of desires to God. It means to open our heart to God. 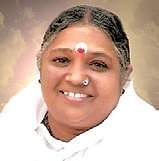 When a person speaks to his beloved, will he feel as though he is putting on a show? But it may look like a show to someone else. Similarly, as far as a devotee is concerned, his devotional singing and prayer is never a show. Prayer is a conversation, a dialogue between the devotee and God. Every moment of the prayer is blissful to the devotee. There is only happiness. There is no discontentment. Prayer is a conversation with our ‘inner lover’. The devotee finds joy in talking to God, who is in fact, the pure consciousness that pervades and fills every atom, both within and without.

It is not an easy task to make our mind, which is wandering among material objects, turn inward. Some people may like self-inquiry. But there are many ordinary people who have not studied the scriptures. Shouldn’t they also realise God? Some people develop allergies to injections given to cure their illness—such injections may even prove fatal to them. For their illness to be cured, they will have to be given oral medicines that will suit the nature of their body. Similarly, the spiritual practices for each individual should be based on his or her samskara. And the path most suitable for most people is that of bhakti.
Prayer is also a means of putting down the burden of the mind. Because the devotee places the burdens of his mind before God as they originate, he will be able to move forward in life without becoming disillusioned in any situation.

Real bhakti is seeing God in everyone and being respectful to everyone. We should try to uplift our minds. It is because the river is full of water that we are able to differentiate between the banks. If the water evaporates, it will be just a single expanse of sand. Everything will become one. Similarly, it is because of the ego in us that we see the difference of ‘I’ and ‘You’. When this ego is removed, everything becomes one.

The writer is a world-renowned spiritual leader

Stay up to date on all the latest Spirituality news with The New Indian Express App. Download now
TAGS
devotion prayer emotion