Before reacting with aggression, we should stop and introspect.

Children, there is an increasing trend to organise groups and then wreck destruction. This is often misinterpreted as the mark of a generation that has the freedom to respond to situations. In fact, destruction is an expression of inner aggression. It endangers both the individual and the society. Before reacting with aggression, we should stop and introspect. Only through self-analysis can we cultivate our power of discrimination. 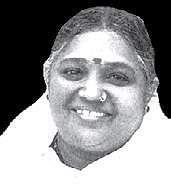 Today, we can clearly see how hatred and anger amassed within the individual is being expressed towards society. People who have not been showed enough love will not be able to express love. It’s possible that the people committing acts of aggression and vengeance are themselves former victims. It is imperative that people receive proper love and support during certain stages of life. Without this, it is very difficult for an individual to become a considerate human being.

As children enter adulthood, the animalistic tendencies in them slowly begin to surface. It is essential that children are shown lots of love and attention during this stage. Parents should never deviate from this responsibility. Nothing is insignificant. We should see even small things as big and advise our children accordingly. Giving the right advice at the right time will yield results.

Once three countries were at war. God was very worried. Finally, He asked representatives of each nation: “Children, why do you perpetuate this enmity? Tell me your problems and I will solve them.”

The second nation’s representative was a believer, and he said, “We don’t have any big desires. We only wish that the nation of my friend here, be wiped off the face of the earth. If that is too difficult for you, then with your blessings, we will be able to accomplish it ourselves.”

God reeled from this unexpected blow. “If believers start talking like this,” he thought, “what will the state of non-believers be?” He then turned to the representative of the third nation. The man prostrated at God’s feet and said, “We desire nothing for ourselves. Please show compassion to the other two nations and fulfil both their desires. That is all we want.”

Such is the anger and enmity that have taken root in our society. No one feels love or concern for anyone else. Be compassionate to the poor. Love and protect Nature. The writer is a world-renowned spiritual leader

More from Spirituality.
Now we are on Telegram too. Follow us for updates
TAGS
Spirituality