Yog is the Road to Pure Bliss

Fulfillment of desires is not evolution. It is sadhana which involves changes within and leads to ultimate freedom. 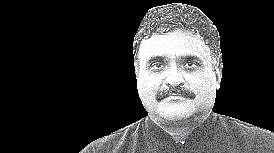 Ayurveda says that the body is composed of three doshas—Vat, Pitt and Kapha. The term ‘dosha’ translates as a defect or an impurity. That is, the body is inherently impure. There is no such thing as negative or positive because everything around that is physical, is bound by time. It is bound to end, and the time for it to end is decided the moment you get it, irrespective of whether that thing is good or bad.

The biggest pain is not in losing something but in getting something which is dear to you. The dearer a thing is to you, the more expensive it proves to be, as that much more pain it will cause to you, when it leaves you. The day you get something, that day itself the pain that comes with it is also decided. Similarly the day you take the body, the doshas that come along with it are also determined because the meaning of body is that which is dooshit.

There is an incident in the life of Ramkrishna Paramhansa that becomes relevant here. Ramkrishna was very fond of eating and would ask his wife to prepare different kinds of delicacies for him. One day his wife asked him: “You give lengthy discourses on eating less, eating sattvik food, observing fasts and that how taste is a bondage (bandhan). Then why do you indulge in such foods yourself?”

His reply came, “There is so much tej in my soul that it is unable to stay in this impure body. By eating all these foods, I have to forcibly live in this body because my time to go has not come as yet; there are still some unfinished tasks that I need to complete.” He also told her that the day he stops eating, three days from then, he would leave his body. And that is exactly how it happened. The day he stopped eating, people knew he was about to go and on the third day, he left the body.

Fulfillment of desires is not evolution. The signs of evolution are clear. You stop falling sick, time passes very quickly, levels of detachment increase, that is, you stop getting hurt. Yog is the road to anand. It is a path of experience, path to direct interaction with the devs and devis. It is sadhana of within, it involves changes within, it is the road to moksha.The writer is the spiritual head of Dhyan Foundation.  www.dhyanfoundation.com