The devi resides within

Once Shumbha—the king of all the great asuras—was killed, the gods sang long paeans in praise of the Devi.

Once Shumbha—the king of all the great asuras—was killed, the gods sang long paeans in praise of the Devi. The gods, led by Indra and Agni extolled the goddess as the ruler of the universes. They called her the form of earth, water, the strength and energy of Vishnu, the foundation of this entire universe. She is also known as the powerful force that deludes mankind and at the right time also shows the way to release the mind of man from the quagmire of modification and change. 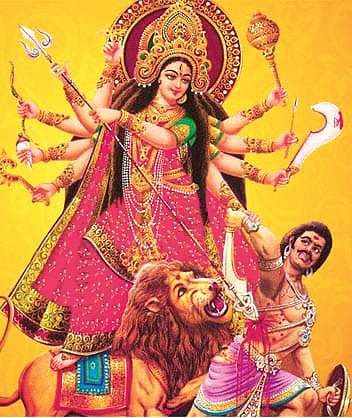 All the different forms of knowledge—the 64 fine arts—are all the manifestation of the Devi, the gods sang. She is the one who gives bhakti or all enjoyment to people in the form of experiences and also grants mukti or freedom from the bondage of birth and death. Praising her weapons, the lion that she rides, they called her Sivaduti, Lakshmi, Saraswati, Durga, Katyayani, Bhadrakali and Chandika.

The Devi was very pleased and she told them, “I am ready to grant a boon to you. Ask any boon you want.” The gods asked her for the boon of invincibility. In all the three worlds of waking, dream and deep sleep state of experiences, we must have no enemies, the devas asked.

She predicted her birth in the Himalayas talking of a gory and ugly looking form when she would destroy rakshasas to protect the sages and their sacrifices and would be called Bhimadevi—the fearsome goddess. She said that she would take the form of a bee to destroy a rakshasa called Aruna and then come to be called Bhramari. Whenever and wherever the world is troubled by rakshasas, the Devi said that she would incarnate herself and rid them off.

Devi is the highest sattvic principle of goodness, boldness and alertness that can express through you and me when invoked. The goddess is always there within hidden as our own great qualities and remembering her through these exploits and stories, we keep her foremost in our feelings. Anytime there is a crisis in our life, this power can be invoked and it will surely not just grant us protection, but also nourish and nurture us.