When the Lord Alone Existed

During this phase of the universe, time, actions and the three qualities of satva, rajas and tamas were merged in you.

While the Upanishads talk about the presence of the self, the life-force and consciousness as an understanding, the whole reams of Bhakti literature sing the praise and glory of consciousness with love and devotion. There is nothing that is manifest as gross or unmanifest in the subtle form as thought, before the birth of and dissolution of this universe. Maya, which is a manifestation of your dynamic and inert aspect, folds back into You—O, Consciousness! At that time before this manifestation, there was no death nor liberation, there was no day or night. At this time, you alone existed, where none else remained as the form of supreme and effulgent self. 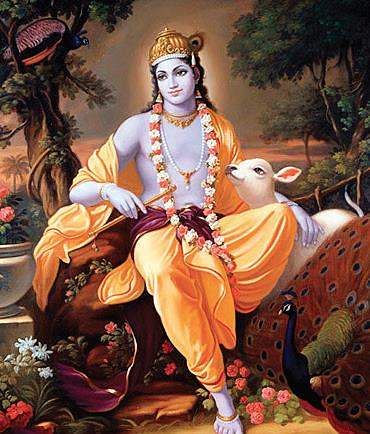 During this phase of the universe, time, actions and the three qualities of satva, rajas and tamas were merged in you. You were in divine sleep O, Lord as everything that sprang out of you folded back into you. They just merge in you and they were not non-existent. Else, how is it that at another cycle of time everything from time, action, qualities, space and the other four elements of air, fire, water and earth can manifest?

When two parardhas or 2,000 crore years of life in this unmanifest state, you decided to create. But your sheer attention to that thought, maya or the intellect, geared itself up for creation. Maya gave birth to time as an agent of consciousness. From time came the power of pulsating movement or in other words, action and the three qualities of satva, rajas and tamas.

While maya is always existing, you just stand by her as a mere conscious witness and not participating with its dynamism. Respectful Consciousness—that we call Krishna—you are reflected in the myriad forms created by maya, the dynamic force of life and that the scriptures term it at the soul called Jiva. Without your presence as life and existence, there is nothing called Jiva and it owes its illusory presence to your real existence alone and nothing else.

The Narayaneeyam describes the essence of the Upanishads beautifully as a story. When this universe was created, Lord Vishnu willed that there is something called individual consciousness. However, instead of being pure presence, it is called ‘ahamkara’ and is predominantly ignorant and inert in nature. The source of the manufacturer’s defect lies here in the tamas. We are born with it and it takes actions, thoughts and emotions of many lifetimes for the ice to melt, flow as water and evaporate into the space of consciousness in self-realisation.

Ahamkara can be divided into three: vaikarikam or the changing nature of life, taijasam or the projecting power of the mind in the forms of a million thoughts and tamasam or that state which is inert. From the vaikarikam came the deities of the senses—Vayu for the skin, Aditya for the eyes, Varuna for taste and Ashwini Kumars, the divine physicians for the sense of smell.The author is Sevak, Chinmaya Mission, Coimbatore; brni.sharanyachaitanya@gmail.com; www.chinmayamission.com