This month, Facebook will also start showing the primary country location of the people who manage pages running or paying for political ads in India.

“Starting today (Thursday), people will begin to see political ads with ‘Published by’ or ‘Paid for by’ disclaimers specified by advertisers. This will give people more information about who is responsible for the ads they see,” Shivnath Thukral, Public Policy Director, India and South Asia at Facebook, said.
Users will also be able to access a ‘searchable ad library’ to find out more about ads related to politics, including a range of impressions, spends and demographics of who viewed the advertisement.
This month, Facebook will also start showing the primary country location of the people who manage pages running or paying for political ads in India.

The social media giant said the enforcement of the new features and the political ads policy begins on February 21. Only advertisers who have completed authorisations and made stipulated disclosures will be allowed to run political ads in India.

With the general elections barely months away, the central government had warned social media platforms of strong action if any attempt was made to influence the country’s electoral process through undesirable means.

The government has also proposed to amend IT rules, where social media, online platforms and messaging apps will be made more accountable and be mandated to deploy tools to identify and curb unlawful content as well as follow stricter due diligence practices. 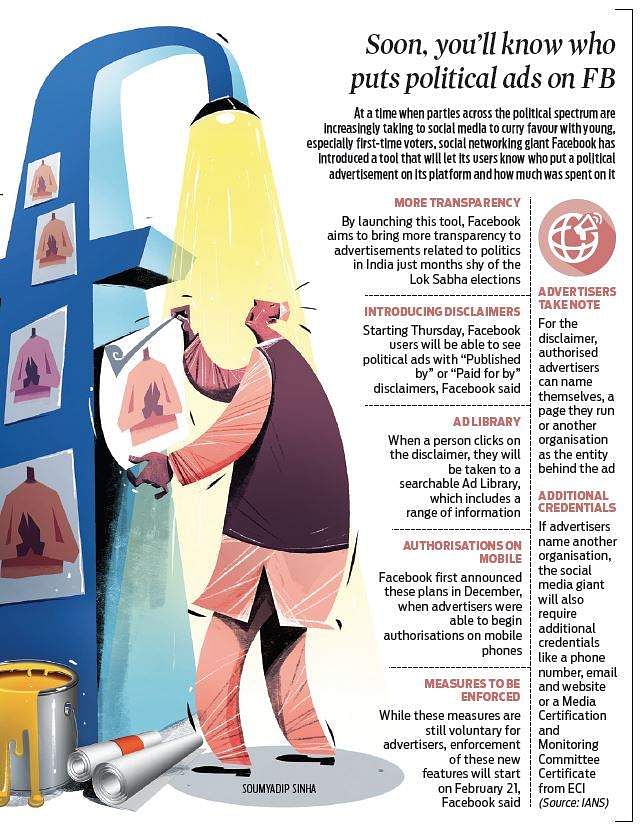