The youngest Indian chef to receive a Michelin star, Alfred Prasad was back in Chennai after ages; this time around to launch Sumeru Foods’ new line of frozen foods, whose recipes he has developed.

The youngest Indian chef to receive a Michelin star, Alfred Prasad was back in Chennai after ages; this time around to launch Sumeru Foods’ new line of frozen foods, whose recipes he has developed. “I have collaborated with frozen food pioneer Sumeru to develop and launch a gourmet range. Our signature products will offer convenience without a compromise on quality and taste. It has involved a lot of R&D for almost a year,” he says on his latest venture.

The heat-and-eat or ready-to-cook foods from the Sumeru range work brilliantly for the millennials who are strapped for time and seek convenience without compromising on nutrition and taste. Dismissing the misconceptions around frozen food, he explains, “We have worked hard to ensure the healthy aspect of our products. No preservatives or artificial colours and flavours have been used. The cooking process and unique packaging technology ensure nutrients and flavours are locked in.” 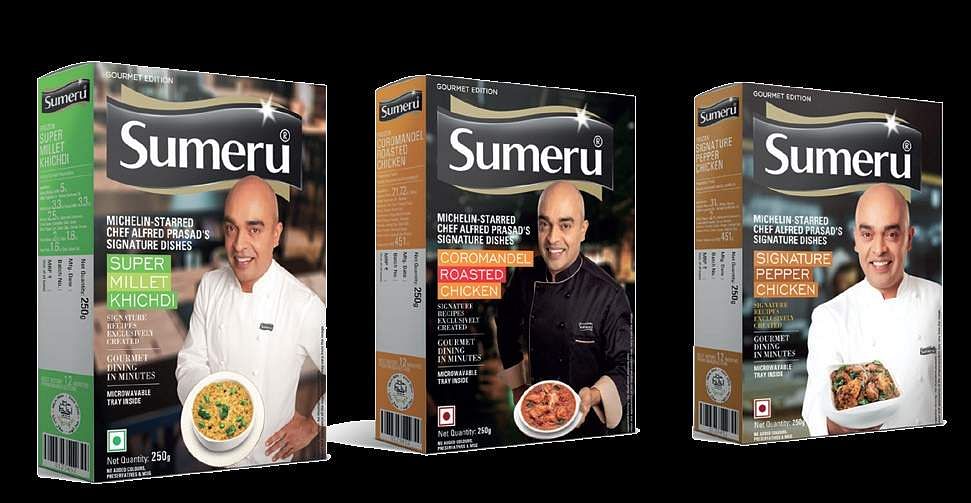 After graduating from Chennai’s Institute of Hotel Management in 1993, Prasad worked in iconic hotels such as ITC Maurya New Delhi and ITC Park Sheraton Chennai and moved to London in 1999. “I joined Tamarind of Mayfair (London) in 2001 as Sous Chef and progressed to become Executive Chef within a year. In 2002, I earned the honour of being the youngest Indian chef to receive a Michelin star. As Director, Cuisine and Executive Chef of Tamarind collection, I oversaw Tamarind of Mayfair, Imli Street and Zaika of Kensington in London, and Tamarind of London (Newport Beach, California).” After nearly 14 years, Prasad left in 2015 to pursue his other projects. Earlier this year, he collaborated with The Oberoi New Delhi to launch a signature Indian fine dining restaurant, OMYA.

For the uninitiated, he also curates ‘INDUS’, the Indian menu offering for hospitality boxes at MCC Lord’s for the cricket season. “I also present my cuisine every summer in Geneva at the Hotel D’Angleterre and work as a food consultant to Gleneagles, Suvlaki and Tandoor Chop House in London,” he says.

Prasad says his culinary philosophy is founded on three pillars: heritage, health and happiness. “I enjoy drawing on ancient wisdom, be it food techniques and traditions or the age-old food science embodied in Ayurveda. Ultimately, it is all about happiness,” he says.

Listing out the best of the eating habits and food practices of foreigners that can be adopted here, he says, “One of the biggest things to adopt is doneness of produce. Meats should be succulent when cooked right and vegetables should retain a vivid colour and crunch. There is huge respect for local produce and seasonality which I think in India is overlooked.” Similarly, he says, “Our ancient food wisdom and Ayurveda concepts, the Indian vegetarian food and the incredible medicinal and restorative properties of spices should be adopted by the West.”