The mortal remains of the DMK stalwart now lies near his political mentor C. N. Annadurai.

DMK stalwart and one of the spearheads of the Dravidian movement, Muthuvel Karunanidhi, was laid to rest beside his political mentor C.N. Annadhurai at the Anna memorial in Marina beach on August 8, a day after he was declared dead by the Kauvery Hosptial in Chennai.

The former five-time CM was initially refused a burial place at the Marina beach by the state government headed by E. Palaniswami. However, a midnight court hearing which then continued in the morning ensured that the DMK supremo gets his place next to his beloved Anna.

The Marina beach already houses the memorials of Karunanidhi's mentor Anna and his contemporaries MGR and Jayalalithaa.

One of Tamil Nadu's most prolific leaders and a former five-time Chief Minister of Tamil Nadu, M Karunanidhi, passed away at the Kauvery Hospital in Chennai on August 7 at the age of 94. Karunanidhi's mortal remains which was first taken to his Gopalapuram residence and then to his CIT colony residence was then placed at Rajaji hall for supporters and political leaders to pay their final respects. 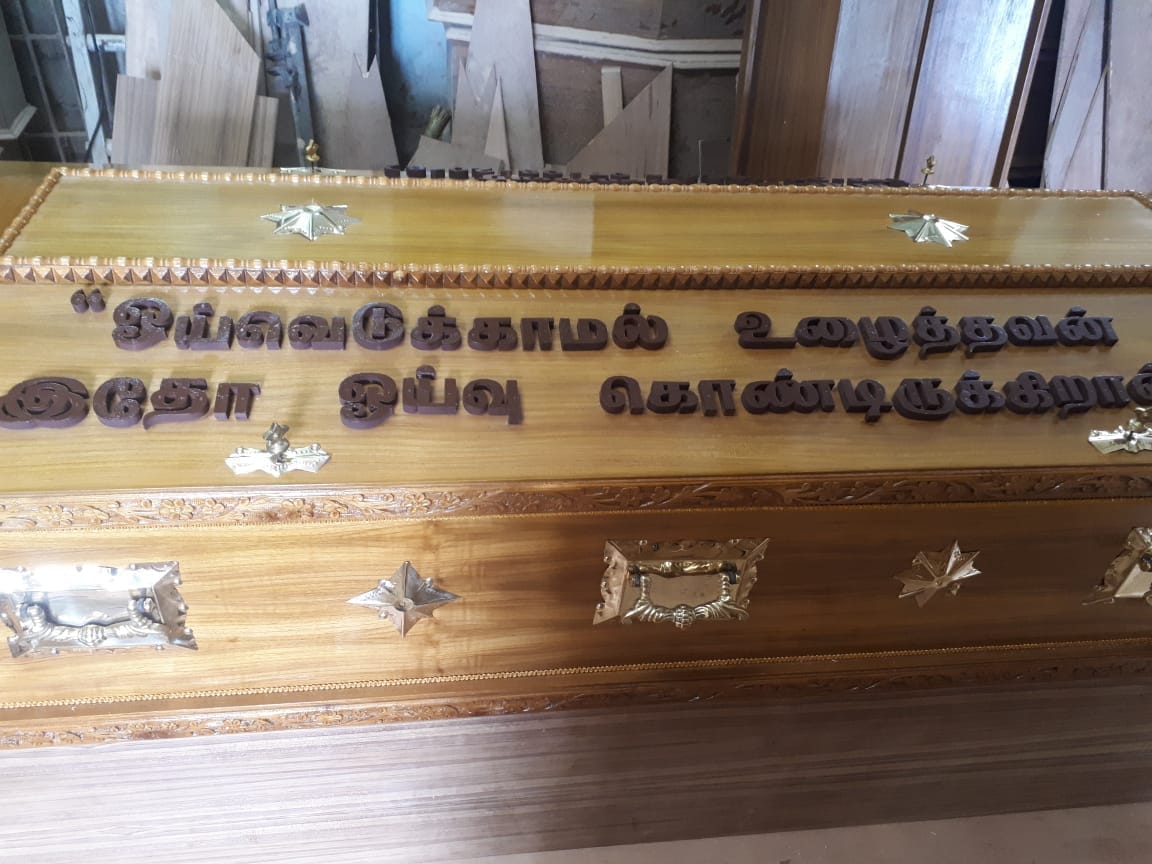 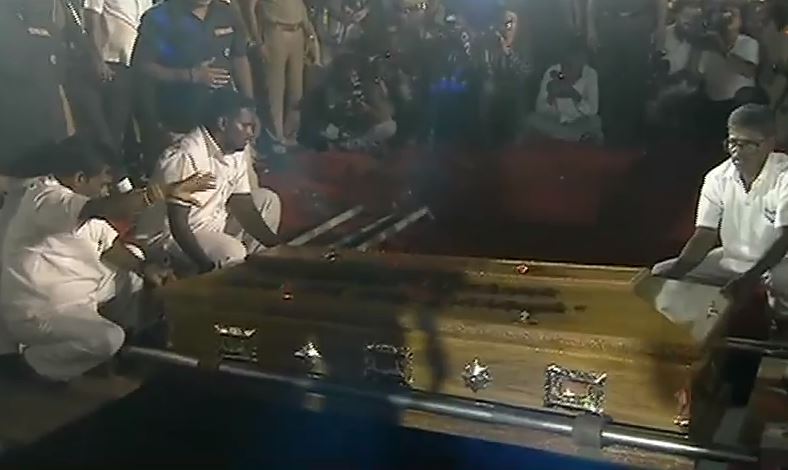 DMK stalwart and one of the most loved leaders in the state of Tamil Nadu, Muthuvel Karunanidhi, now lies alongside his mentor Anna near the Anna Memorial at the Marina Beach.

State honours being accorded to the five time CM of Tamil Nadu as his mortal remains lie in Marina beach near the Anna memorial.

Mortal remains of DMK president M Karunanidhi being taken to the burial site at Anna memorial, by Defence personnel @NewIndianXpress

Funeral procession of DMK president M Karunanidhi which began from Rajaji Hall at 4.05 p.m., after two hours, now moving on Kamarajar Road on Marina which is very close to Anna memorial @NewIndianXpress

Since the funeral procession has to wade through the people, the army vehicle carrying the mortal remains of DMK president M Karunanidhi is now crossing University of Madras, reports TNIE's T Muruganandam.

DMK working president MK Stalin, many key functionaries of the party are following the Army vehicle which carries the mortal remains of DMK president M Karunanidhi in his funeral procession @NewIndianXpress 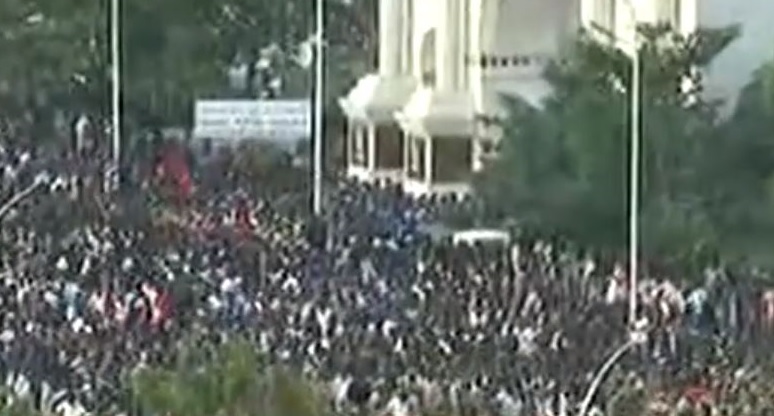 Tributes pour in from the neighbour

Bengaluru based miniature artist Mallikarjuna Reddy shows a chalk sculpture of the late DMK leader and former Chief Minister M Karunanidhi in Bengaluru on Wednesday. The sculpture is 6mm thick and 10mm in height that took 4 hours to complete. (Photo | EPS / Pushkar V) 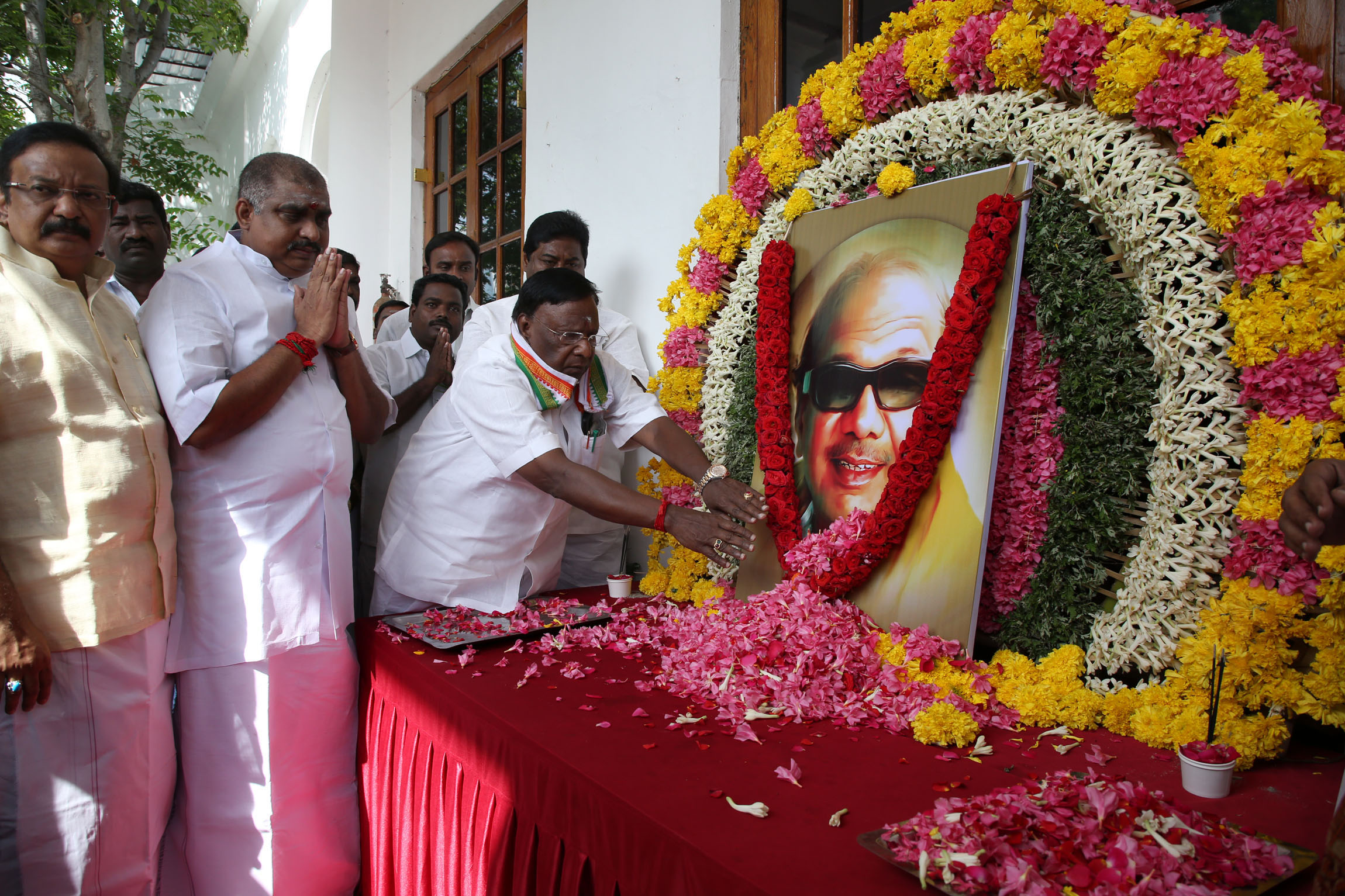 V Narayanasamy along with the ministers pays tribute to the late DMK chief on wednesday in Puducherry. (Photo: G Pattabiraman / EPS)

2 dead and 33 injured in scuffle and stampede outside RajajiHall in Chennai, reports ANI.

Though a regional party leader, Karunanidhi, a 5-time CM, was a well-known name across the country and even beyond it.

READ HERE: Like Jayalalithaa, Karunanidhi deserves to be given space on Marina Beach: Rahul Gandhi

The Congress President who landed in Chennai sometime back visits Rajaji hall to pay his last respects to DMK chief Karunanidhi.

Congress leader Sonia Gandhi on Wednesday condoled the death of former Tamil Nadu Chief Minister M. Karunanidhi, describing him as a "father figure" who always showed great kindness and consideration to her.

#KarunanidhiDeath At #Rajajihall in Chennai, DMK working president MK Stalin makes fervent plea to party cadre to maintain calm; his appeal comes in the wake of reports that two persons died there.

#KarunanidhiDeath Two killed and around 15 people injured in stampede at #RajajiHall in Chennai while paying homage to DMK leader Karunanidhi, reports @JayanthiPawar10.

People climb walls in an attempt to enter #RajajiHall after Police blocked hall entrance due to huge crowds #Karunanidhi pic.twitter.com/gQJKpOjs2t

DMK president M Karunanidhi to take rest in this coffin with the words inscribed as per his wish: "Here lies the person who worked untiringly !" @NewIndianXpress pic.twitter.com/Go6FBs9g7Q

A group of transgenders mourn the demise of DMK supremo M Karunanidhi at Khajapettai in Tiruchy.

#DMK Cadres in #Coimbatore tonsured their head in a bid show their affection for the death of #DMKChief. #RIPKalaignar @NewIndianXpress pic.twitter.com/5havjrWlgg

#KarunanidhiDeath Security tightened at #MarinaBeach Anna Memorial as the venue gets ready for the burial of late DMK leader Karunanidhi, reports @SushmithaRam from Chennai.#RIPKalaignar pic.twitter.com/eyPMfMbNf2

#KarunanidhiDeath DMK principal secretary Durai Murugan inspecting the place behind Anna memorial in #MarinaBeach where DMK leader M Karunanidhi is to be laid to rest today.

A DMK cadre starts his auto from #Ramanathapuram, carrying portrait of #Karunanidhi, speaker and mike set to inform the remote villagers of the district about his leader's demise @NewIndianXpress @ranjim pic.twitter.com/UTOGYEs2Xj

DMK working president and son of Karunanidhi, M K Stalin breaks down after hearing that the Madras HC has allowed his father to be laid to rest at Marina beach. 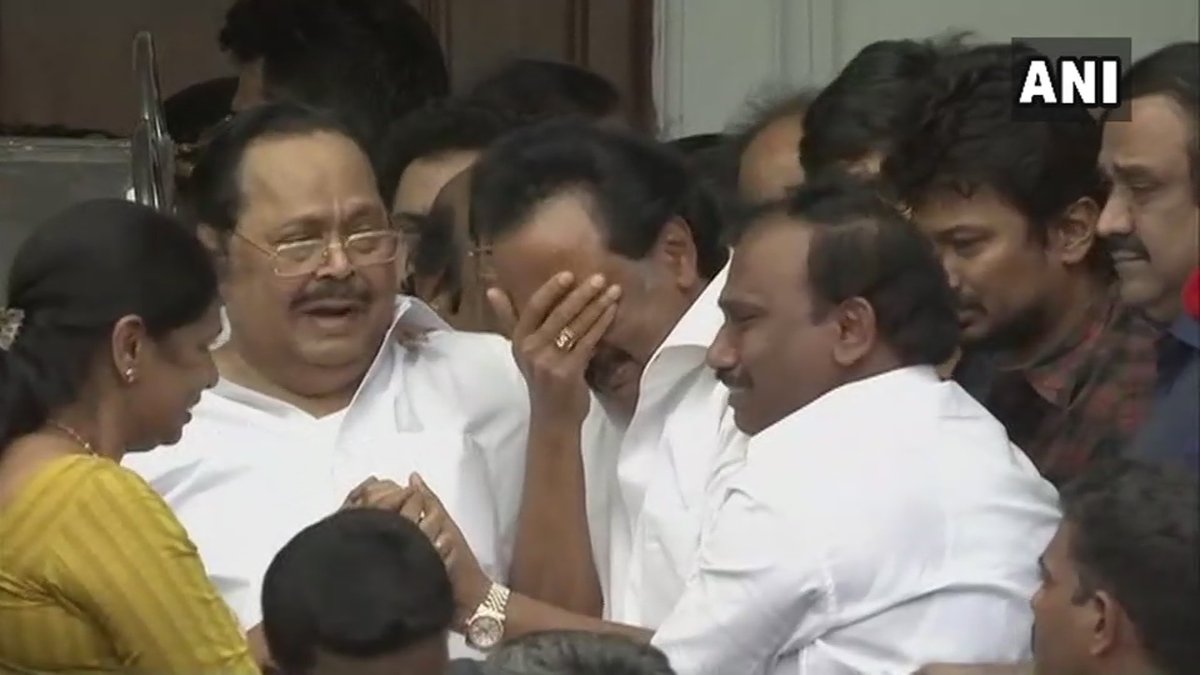 Madras HC green signal: Karunanidhi to be buried at Marina

LIVE from #MadrasHighCourt | Arguments are now over in the case against denial of burial land by Tamil Nadu Govt at Marina beach for M #Karunanidhi. Acting Chief Justice begins dictating orders. 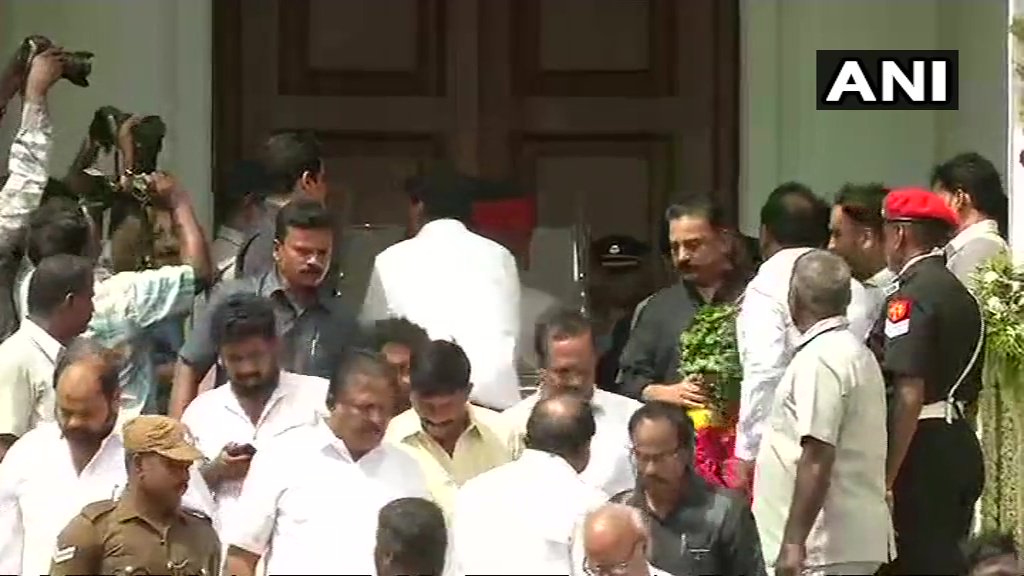 ADMK party flag flying at half-staff to mourn the passing of DMK leader #Kalaingar at A Kumaramangalam in Villupuram dist. @NewIndianXpress pic.twitter.com/oTi50UqHOP

09:33 Aug 8
Marina burial space hearing: There are 1 crore DMK followers in Tamil Nadu out of 7 crore population of the state. They'll be offended if burial land is not allotted for Karunanidhi at Marina beach, says DMK lawyer.
09:32 Aug 8

LIVE UPDATES from #MadrasHighCourt | DMK's lawyer says 'You (state govt) have announced state mourning, why not give land for burial? There's no prohibition under Central Govt protocol to allot land at Marina beach for ex-CMs'#KarunanidhiDeath 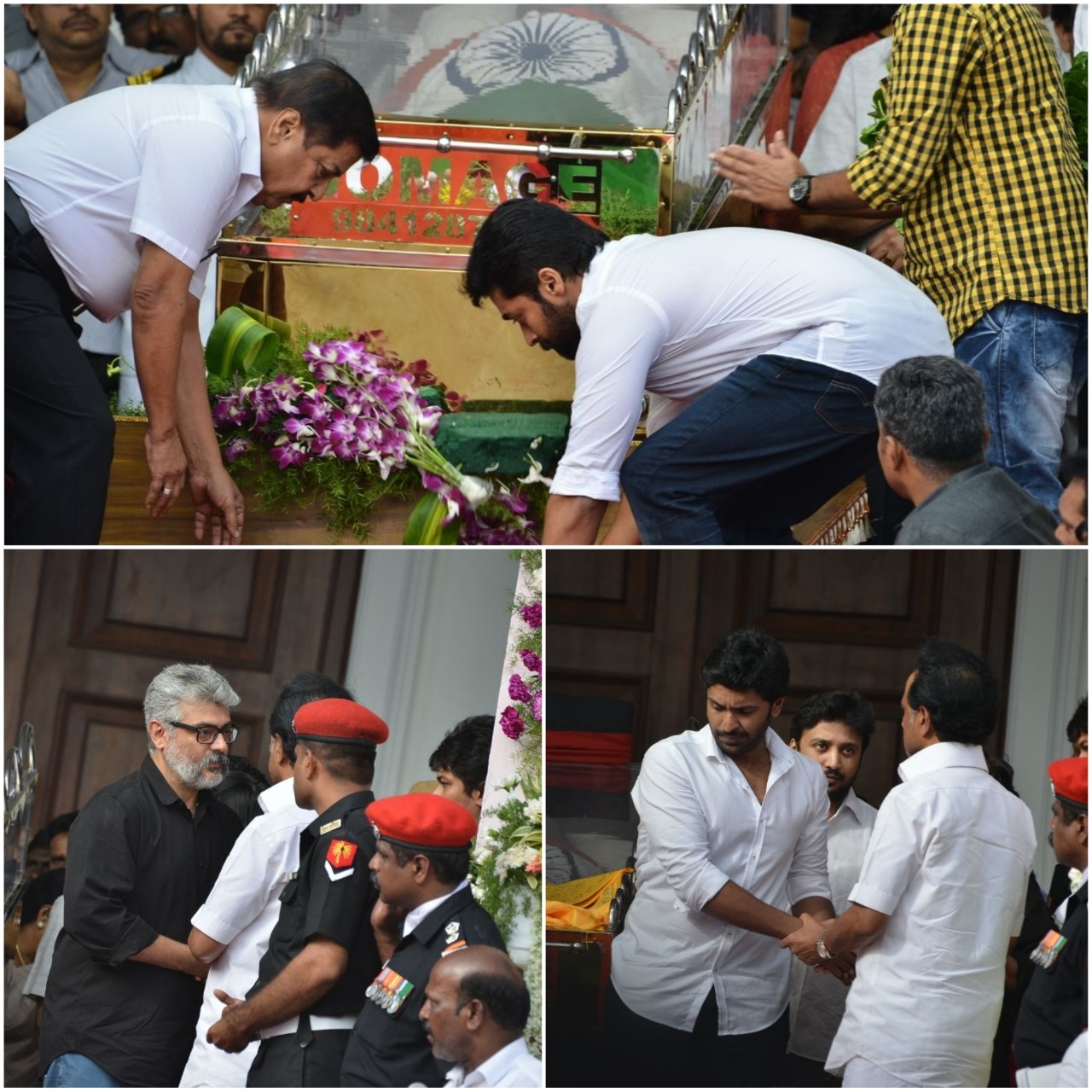 TN Govt states in its counter affidavit that DMK chief Karunanidhi himself didn't allot land for former CM Janaki Ramachandran after understanding the protocol manual when Karunanidhi was the CM. (ANI)

Marina land row: Lawyer of petitioner Traffic Ramaswamy says 'We have no objection to the burial land for Karunanidhi'. Acting Chief Justice says to the lawyer 'Withdraw your case'. (ANI)

Not just Chennai, the whole state has a deserted look today.

#Ramanathapuram bus stand wore a deserted look. People who were waiting for bus till early mrng r transported by pvt cabs. Tricycle ws used to transport nearby villagers. #DMK cadres to protest against denial of space at merina for burial of #Karunanidhi @NewIndianXpress @ranjim pic.twitter.com/Ev40K8nQEm

This is a great loss for Tamil Nadu. My deep condolences to his family members & DMK party workers: Tamil Nadu CM E Palaniswami

TTV Dhinakaran, Rajinikanth, Dhanush are among the first to pay final respects to the DMK chief. Several DMK supporters and public have gathered at the Rajaji Hall for a final glimpse of their favourite leader.

Mortal remains of Karunanidhi moved to Rajaji Hall from his CIT colony residence. Public and political leaders will pay their final respects to the state's Tall leader here. 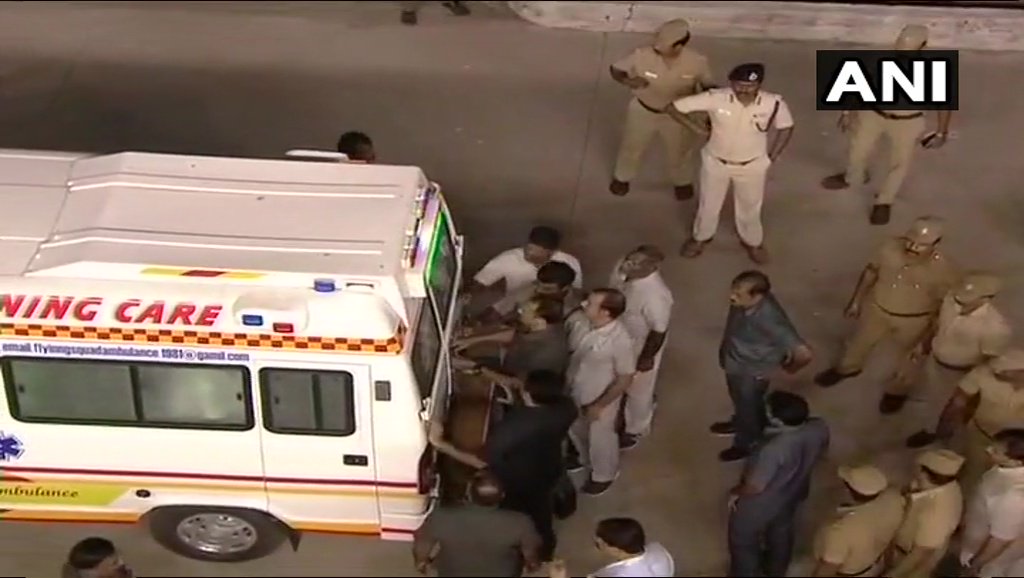