Many are still stranded in their homes with no food and sheaths of water around them at various places in Alapuzha, Thrissur and Ernakulam districts.

Thousands of people in flood-hit areas in Kerala are battling all odds to survive as the death toll has touched 197 in the past 10 days in the second spell of monsoon fury since August 8.

Many are still stranded in their homes with no food and sheaths of water around them at various places in Alapuzha, Thrissur and Ernakulam districts.

The maximum death toll has been reported from Idukki district, where 43 people have lost their lives so far, as per official estimates.

Twenty-eight deaths were reported in Malappuram and 27 in Thrissur.

At Chengannur in Alapuzha district, at least 5,000 are stranded, according to revenue officials.

Cochin Airport to reopen on august 26

With the flood waters receding rapidly, the Cochin International Airport, one of the three in Kerala and the busiest, will open on August 26 - after 12 days of closure. Airport authorities have been engaged in a massive cleaning operation of the operational area that was submerged by flood waters. One side the compound wall of the airport came down after water from the swollen Periyar river and its tributaries, which received an unprecedented amount of water released by major dams, entered the complex, turning it into a virtual sea. (PTI)

#WATCH: A old woman being airlifted by Indian Air Force (IAF) from Ernakulam. She was later taken to Navy Hospital. (19.8.2018) #KeralaFloods pic.twitter.com/6NxOhgfeFD

People languishing in relief camps have no clue about the future

Kerala: Chandra, resident of Vandiperiyar in Idukki dist & a tailor by profession, lost his house in the floods; says 'I have been living here for 3 yrs. Now I don't have a home. I'm in a relief camp. I don't know what will happen once they send us out of the camp. #KeralaFloods pic.twitter.com/80tl2HCnQJ

Train No.16649 Mangalauru Central - Thiruvananthapuram Parasuram Express will depart at 5 am on Aug. 20 as per schedule. It will further proceed to Thrisur-Eranakulam - Thiruvananthapuram according to the functioning of track between Shoranur and Ernakulam @NewIndianXpress

Commercial flights will start operating from Kochi Naval Base from tomorrow

Two special trains will run tomorrow to Kolkata from Trivandrum & Ernakulam. Train services expected to restore on all lines by tomorrow evening. Commercial flights will start operating from Kochi Naval Base from tomorrow: Government of India #KeralaFloods pic.twitter.com/f9EcJNKFMI

Odisha CM announced additional financial assistance of Rs 5 Crore for Kerala from Chief Minister's Relief Fund. This is in addition to Rs 5 Cr sanctioned earlier. He has also ordered 500 MT of polythene sheets worth about Rs 8 Crores to be sent to Kerala. #KeralaFloods (file pic) pic.twitter.com/YDy2lpkEp7

A total of 724,649 people are sheltering in 5,645 camps following "one of the worst ever floods" in Kerala that has claimed some 370 lives and caused widespread destruction, Chief Minister Pinarayi Vijayan said on Sunday.

244 Fire Service Personnel trained in rescue ops with 65 rescue boats&other equipment have been sent from Odisha to Kerala to help in rescue ops. Odisha CM directed Odisha Relief Commissioner to extend all help to people from the state stranded in Kerala #KeralaFloods (file pic) pic.twitter.com/oLsCWkvyM4

CLICK HERE TO KNOW HOW TO RETRIEVE YOUR LOST RATION CARDS, AADHAAR, VOTER IDS AND OTHER IDENTIFICATION DOCUMENTS

Donate 10 per cent of Eid budget for Kerala, says Islamic Centre on India

The Islamic Centre of India has appealed to Muslims to at least donate 10 per cent of their Eid-ul-Adha budget for flood-ravaged Kerala.
06:04 Aug 19

Pope Francis on Sunday called for solidarity and help from the international community for people affected by Kerala flood. 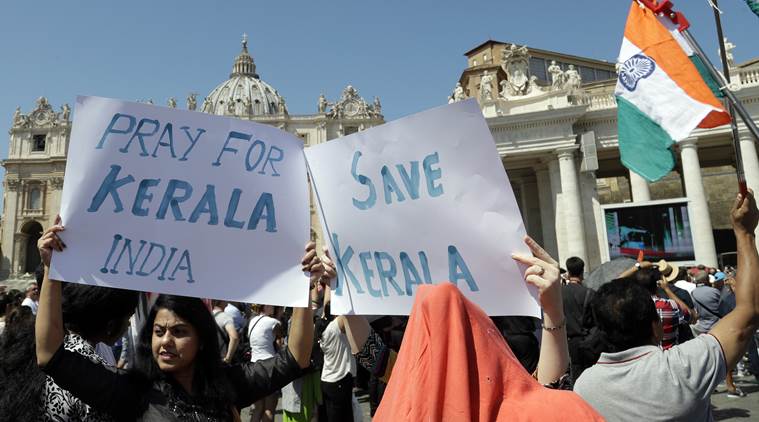 Indian citizens show placards in support of the people of Kerala during Pope Francis' Angelus noon prayer in St. Peter's Square at the Vatican (Photo | AP)

MIM through its Majlis Charitable Trust has decided to contribute ₹16 lakhs for #KeralaFloodRelief this amount will be deposited in @CMOKerala Relief Fund by tomorrow,& we will also send required medicines worth ₹10 lakhs to KERALA
I urge people t come forward and help KERALA

Vistara airlines started operating all its Kochi flights to and from Thiruvananthapuram since Thursday, after the closure of Cochin International Airport.

Kerala CM said in a press conference that the State's IT cell will make sure acadamic loss of students are met. 36 lakh textbooks are ready for distribution and the students will be give additional uniforms. 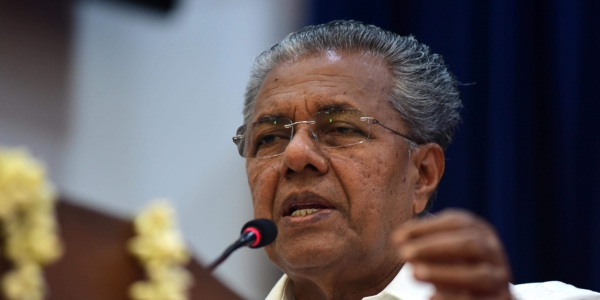 All the fishermen returning home will be honoured by local self governments, says CM Pinarayi Vijayan

Rainfall likely to subside in next five days: IMD

Kerala CM congratulates all the fishermen who took part in the rescue operations. Announces free fuel and Rs 3000 per day for those who came forward to help during the difficult time.

Will provide six health inspectors to each panchayat: Kerala CM

"Each panchayat will get six health inspectors, health department will hire required people on a contract basis," says Kerala CM at a press conference.

"Restoring electricity supply will take time as security is of prime importance right now. However, street lights will be fixed without fail," says CM Pinarayi Vijayan at a press confrence.

Green chilli sold for Rs 400 per kilogram in Kochi

The worst floods to batter Kerala since 1924 have fuelled shortages and sent prices of vegetables zooming, with green chilli selling at Rs 400 a kg in Kochi and surrounding areas. (IANS)

Jammu and Kashmir government provides an assistance of Rs 2 crore for supporting the flood relief efforts in Kerala.
04:15 Aug 19

#KeralaFloods: A community kitchen has been set up at Cochin University of Science & Technology (CUSAT), Kalamassery by a team of 21 Navy personnel. The kitchen has provided 50000 meals over last 3 days to flood affected people, with support from students & local administration. pic.twitter.com/uJKD69ZL5h

T 2904 - The devastation caused by incessant rain in Kerala is frightening !
Hundreds and thousands of our sisters and brothers are in deep anguish ! We must do all we can to contribute as much as we can towards the needs of the people of Kerala ..
I have .. you must too ..🙏

Indian railways to transport relief material to Kerala for free

Railways has issued a set of guidelines allowing all government organisations as well as private bodies to transport relief material to flood-ravaged Kerala for free. (PTI)

Attention:Efforts are in progress to save even the last person stranded. Many of the requests coming to helpline numbers are for people who are already rescued. Sending erroneous information can only delay rescue efforts. Kindly forward only messages that are valid #KeralaFloods

58 of our NDRF teams are deployed across 8 districts of the state. They're carrying out rescue & evacuation work & extending medical emergency aids. Now that rain has subsided to some extent, our teams are being relocated partly to worst-affected areas: NDRF DG. #KeralaFloods pic.twitter.com/93Cl9aAJ6y

Centre taking steps to ensure operations from Cochin Naval Base

President Ram Nath Kovind expressed satisfaction that Union & state governments were working together & in synergy in rescue and relief operations in Kerala. He praised relief agencies such as NDRF and public officials at state and Central level for their response and commitment. (ANI)

Alappuzha: Government school converted to a relief camp for #KeralaFloods in Chengannur, total 115 people have taken shelter at the camp. pic.twitter.com/4C4EHAVMSl

#Kerala: Veterinary Hospital converted to a relief shelter in Idukki district's Vandiperiyar, total 35 people are staying at the shelter. pic.twitter.com/OZCcbz7366

Kerala: At 10 am today, the water level in the Idukki reservoir was 2402.28 ft; water flow into Periyar river is 913 cusecs per hour. Two shutters have been closed. #KeralaFloods (File pic) pic.twitter.com/YWqfzZj2DA

#Kerala:RAF team recovered one body from Nemmara landslide area in Palakkad district early morning today.Dy Commandant RAF Coimbatore unit, says,"We have recovered total 10 bodies from the area. Landslides are still occurring in the area,it was a tough task to recover the bodies" pic.twitter.com/hISfBI1EEy

Now we are on Telegram too. Follow us for updates
TAGS
Kerala floods Kerala rains