The Centre today released Rs 600 crore to flood-hit Kerala and decided to waive customs duty and GST on the relief materials being imported for the affected people in the state.

NEW DELHI: The Centre today released Rs 600 crore to flood-hit Kerala and decided to waive customs duty and GST on the relief materials being imported for the affected people in the state.

The announcement came following a meeting of the National Crisis Management Committee (NCMC), which met for the sixth consecutive day.

ALSO READ | Move ahead proudly as people who overcame a crisis in an exemplary manner: Kerala CM Pinarayi Vijayan

Welcoming the generous contribution from the Arab kingdom, Pinarayi said, "Kerala has a special relationship with UAE, which is a home away from home for Malayalees. We express our gratitude to UAE for their support."

Chess Champion from Mumbai Suhani Lohia contributes her prize money of ₹21,000/- towards relief operations for #KeralaFloods affected persons.
I wish her lot of success! pic.twitter.com/iOYUWlyhfI

Can you separate the 'chaya kada' ( teashop) factor from the lives of Malayalis? https://t.co/kUam9kepFK

Centre should stop step-motherly treatment to Kerala: MP A Owaisi

As per Kerala govt damage of Rs 2000 Cr has happened. Giving Rs2000 Cr is nothing for India.Unfortunately,we allot Rs 2000-3000 Cr for statues of great leaders.What about people of our country? Demand that GoI stop this step-motherly treatment & come to rescue of Kerala: A Owaisi pic.twitter.com/hdKmd1PMYW

Thankful to rulers of UAE for coming forward&giving Rs 700 Cr for Kerala. In 2017, India got 69 billion dollars as foreign remittance & Kerala people contributed 40% to it. Why is it that we are criticising GoI's release of Rs 500 Cr? It is just pittance. It is shameful: A Owaisi pic.twitter.com/c3ciZQJe45

#Delhi: Delhi University Kerala Students' Association-'Maithry' organise a candle march at India Gate for those who lost their lives in #KeralaFloods. pic.twitter.com/x68yWgp9PG

#KeralaFloodRelief : Humanitarian Assistance & Disaster Relief Ops by IAF - Many parts of Kerala continue to be affected by landslides & floods. IAF responded quickly to the crisis, extending all possible assistance to the residents of Kerala.
Details: https://t.co/LVyWgdxw4t pic.twitter.com/h4C0A0hmGt

Government has taken an immediate decision to help the flood victims of Kerala by allocating an additional 89,540 tonnes of food grains (at a rate of 5 kg per person) for families left out of the National Food Security Act: Union Minister @irvpaswan

On this occasion, we also express the gratitude of Kerala to HH Sheikh Khalifa bin Zayed Al Nahyan, President of the UAE and the Emir of Abu Dhabi, and HH Sheikh Mohammed bin Rashid Al Maktoum ( @HHShkMohd), Prime Minister of UAE and Emir of Dubai. #KeralaFloodRelief

UAE will provide Kerala an assistance of ₹700 Crore, we express our gratitude for their support: CM Pinarayi Vijayan

CM Pinarayi Vijayan informed that the United Arab Emirates will provide Kerala an assistance of ₹700 Crore. Kerala has a special relationship with UAE, which is a home away from home for Malayalees. We express our gratitude to UAE for their support. #KeralaFloodRelief pic.twitter.com/yfwbt9iEkd

Have set up 24/7 helpline in DGCA: Suresh Prabhu 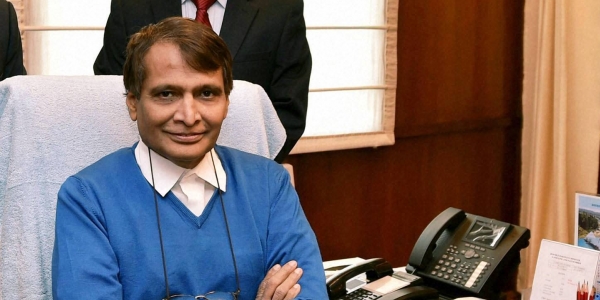 Have set up 24/7 helpline in DGCA. All complaints related will be addressed. We've advised all airlines to freeze fares at a particular level. If there are complaints about airlines not following that,passengers are requested to contact DGCA: Union Minister Suresh Prabhu

Indian Railways have restored all the major tracks connecting Kerala that were damaged due to floods. Three divisions of Southern Railway were severely affected with heavy flash floods, land slips, boulder falling on track etc. pic.twitter.com/hCHilwyz9y

Ayyappa devotees asked not to go to Sabarimala shrine

Ayyappa devotees wishing to go to the hill shrine of Sabarimala for the Onam festival have been advised by authorities not to go there as flood waters in the Pampa river at the foothills has not receded. Besides, roads in nearby areas of Pampa have been damaged and several trees en route to the shrine uprooted under the impact of the heavy rains, the Travancore Devaswom Board, which manages the shrine, said. (PTI)

#KeralaFloods: 41 teams of NDRF are deployed in Kerala to assist state administration in rescue, relief and rehabilitation work and to respond in any eventuality. Today, NDRF teams deployed in districts Idukki, Kottayam and Pathanamthtitta evacuated 122 persons to safer places

Mizoram to give Rs 2 crore for Kerala flood relief

Mizoram government would contribute Rs 2 crore to the Kerala Chief Minister's Relief Fund in the wake of the recent rain-fed floods in the southern state, an official said today.

Sex workers in Maharashtra's Ahmednagar district have donated Rs 21,000 for Kerala flood victims and they will be raising another Rs 1 lakh by the end of this month. A group of sex workers presented a cheque of Rs 21,000 drawn in favour of the Chief Minister's Relief Fund for Kerala flood victims to Resident Deputy Collector Prashant Patil here yesterday, said a functionary of an NGO working for them. (PTI)

The Tripura government will donate Rs 1 crore for flood relief in Kerala, a state minister said today. The decision was taken in the meeting of the council of ministers held at the civil secretariat here yesterday, the state's Law and Education Minister Ratan Lal Nath said.

Kerala: An all party meeting, being chaired by CM Pinarayi Vijayan, over #KeralaFloods is underway in Thiruvananthapuram. pic.twitter.com/1Z30KLP031

The Cochin international Airport has suffered a loss of Rs 220 for being shut for being shut since August 15. The runway, taxi bay, duty free shops and other areas of international and domestic terminals were submerged, causing damage to electrical equipment including runway lights, an official noted.

User fee at three toll plazas waived off till August 26

National Highways Authority of India (NHAI) has waived off user fee at three toll plazas in Kerala in view of the unprecedented flood situation in the state. The plazas where tolls where the waiver has been introduced are Paliekkara in Thrissur district, Pampampallam in Palakkad district and Kumbalam in Cochin.

As Kerala limps back to recovery, damages continue in the state

The new house of Suneesh T K which was under construction at Pallikulangarathazham collapsed at early morning in Kozhikode. (Photo| Manu R Mavelil/ EPS)

The devastating floods and landslides triggered by heavy rain in Idukki have affected hundreds of kilometres of state highways and major district roads so far, inflicting damages worth crores of rupees, which the Public Works Department has not estimated yet.

The maximum damages to roads have been recorded in the Devikulam Taluk of Idukki district, comprising Adimaly, Munnar, Marayur, Kanthalloor, Mankulam, Pallivasal, Vattavada and Vellathooval panchayaths. While in the Idukki subdivision as many as 83 roads of the total 86 under PWD were completely destructed. Only one-way traffic is allowed through the rest of the three roads. Out of the 97 roads in the Nedumkandam sub division, 4 roads were fully damaged.

Ameture radio or HAM radio operators are helping in rescue operations in flood-devastated Kerala by tracing stranded people through their last mobile phone location and sharing information with officials as most communication services remain hit in the state. Over 300 HAM radio operators are working round-the-clock in Kerala and are helping the administration in rescue operations, Director of the Hyderabad-based National Institute of Amateur Radio, Ram Mohan Suri, said.

Cochin Airport to reopen on August 26

The Cochin International Airport, one of the three in Kerala and the busiest, will open on August 26 - after 12 days of closure. Airport authorities have been engaged in a massive cleaning operation of the operational area that was submerged by flood waters. One side the compound wall of the airport came down after water from the swollen Periyar river and its tributaries, which received an unprecedented amount of water released by major dams, entered the complex, turning it into a virtual sea. (PTI)

Center to waive off import duty and GST on relief material

The Union government has decided to waive off import duty and Goods and Service Taxes (GST) on relief materials being sent to Kerala from abroad.

Center to set up cyclone warning center in Thiruvananthapuram

With increase in severe weather events in Kerala and Karnataka, Centre has decided to a set up a cyclone warning centre in Thiruvananthapuram within a year @NewIndianXpress

Automobile mogul, Bajaj Auto has announced to donate Rs 2 crore in aid of the flood-hit state. The company has divided the amount equally, where they will be donating Rs 1 crore in cash to the Chief Minister's distress relief fund and the remaining amount will be used for buying survival kits.

Rains, floods and landslides have killed 373 people since May 30, the National Disaster Management Authority (NDMA) said on Tuesday. Altogether 87 people were injured and 32 others went missing in the deluge which hit all the 14 districts. (PTI)

Kerala cabinet has decided to recommend to the Governor to convene a special assembly session on August 30th to discuss relief, rehabilitation and reconstruction of Kerala after floods: CM Pinarayi Vijayan #Keralafloods pic.twitter.com/92IACWwVbX

IndiGo to undertake special flight from Kochi Naval Base

Kerala: Restoration work started at Chalakudy market in Thrissur after a decrease in the water level in the district. #KeralaFloods pic.twitter.com/yRZPh6c95q

Kerala government calls for an all-party meeting over flood situation in the state at 4 pm today in Thiruvananthapuram. (ANI)