With the death toll now at 12, a vacation bench of the Madras High Court has directed the Tamil Nadu government to preserve the bodies of the victims, until further orders.

The coastal town of Thoothukudi remained on the boil Wednesday as police opened fire against protesters for the second consecutive day killing one Kalliappan (22), injuring others and taking the death toll to 12.

As protesters continued to clash with police personnel, whose strength had reportedly been doubled, the State government, Wednesday evening, transferred both Superintendent of Police and the Collector of Thoothukudi district.

IN PICTURES | Sterlite Protest intensifies as mob, police clash in Thoothukudi for the second day

Earlier today, the Madurai bench of Madras High Court stayed the construction of a new copper smelter by Sterlite industries in Thoothukudi.

The situation in the district remains tense.

Here are the latest updates:

Live Updates
08:25 May 23
Thoothukudi Superintendent of Police (SP) P Mahendran and Collector N Venkatesh have been transferred. Murali Rambha IPS and Sandeep Nanduri will take charge as the new SP and Collector of Thoothukudi distirct respectively.
07:52 May 23

Transmission of messages through internet services suspended throughout Thoothukudi, Tirunelveli and Kanyakumari districts till May 27 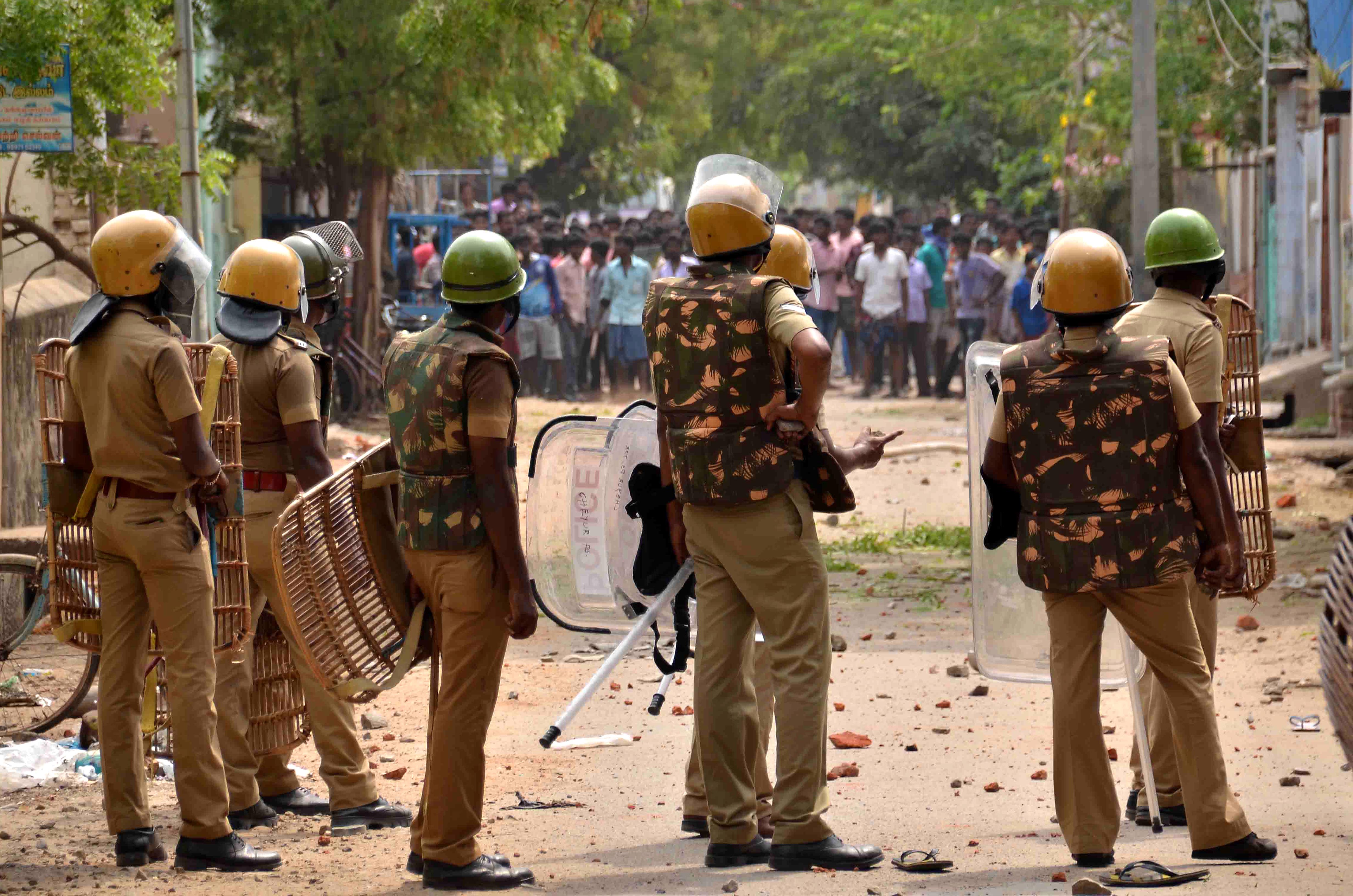 More than 7000 policemen deployed in the troubled district (Photo | EPS)

Earlier, petitioners counsel R Sankara Subbu told the judges that the police, on the instructions of the Collector and SP, had indulged in provoking activities against the thousands of peaceful participants.

A vacation bench of the Madras High Court has directed the State government to preserve the bodies of the 12 persons, who were shot dead by police at Thoothukudi on May 22 and 23, until further orders.

The Union Home Ministry has sought a detailed report from the Tamil Nadu government over the police firing during the Thoothukudi protests.

Visual from Anna Nagar where a man was shot dead. 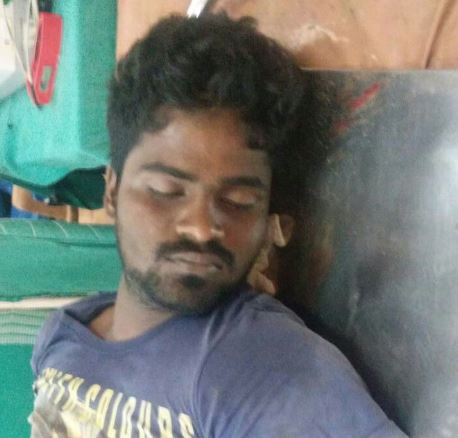 Government is responsible for the Thoothukudi massacre, Thirunavukarasu, President TN Congress committee. The govt should issue the order for closing the copper plant paying heed to public opposition. He consoled the injured families at GH.#SterliteProtest @NewIndianXpress pic.twitter.com/PEGoTjOpWV

Six police jeeps have been burnt.

One dead in fresh police firing

The local police fired at five persons. One person, Kalliappan died, while the rest are seriously-injured.

Communist Party of India's D Raja has described the police firing in Thoothukudi as an act of 'State-sponsored terror'.

"Tamils are being murdered because they refuse to accept RSS ideology. RSS and Modi's guns can never crush the emotions of Tamils. Tamil brothers and sisters, we are with you," says Congress President Rahul Gandhi.

Police detain relative of woman shot dead by police in Thirespuram who went to see her body.

"What happened in Tuticorin is a cold-blooded murder by police. They should be booked for murder. SP, Collector, DGP and Chief Secretary should be suspended. Taking moral responsibility, CM Edappadi K Palaniswami should resign," said Anbumani Ramadoss, Pattali Makkal Katchi. 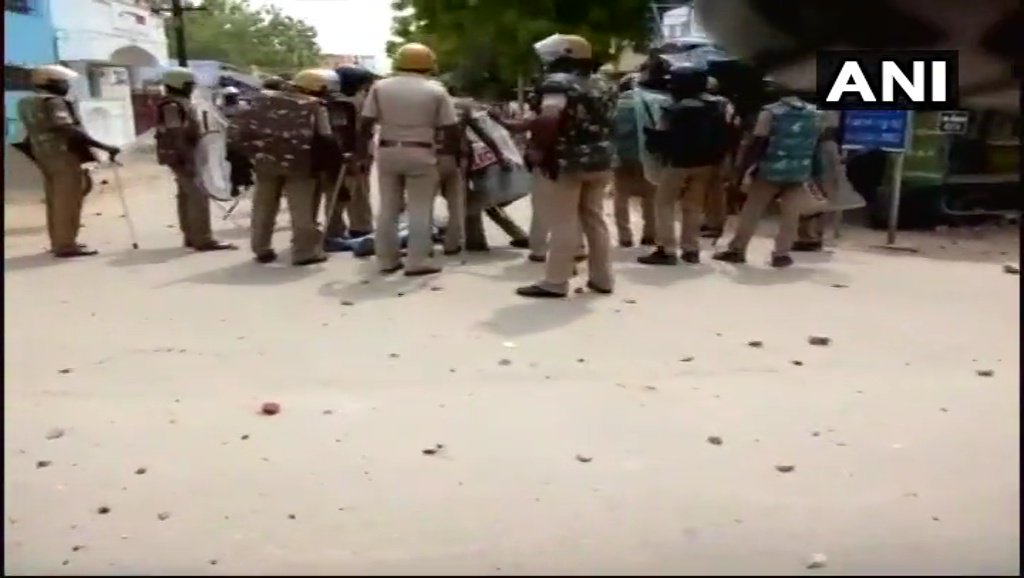 Offering comforts to the injured and relatives of the deceased, Kamal Haasan, while speaking to media persons, said that the postmortem should be conducted before unbiased doctors. He further insisted action against the erred police officials involved in the shoot out.

#Correction Kamal Haasan met people who were injured in #SterliteProtest yesterday, at General Hospital in #Thoothukudi; family of victims said, 'Please come and see what they have done to us' (Earlier translation was incorrect, hence deleted) pic.twitter.com/t9OwmDZqiv

Mean while, when the district collector N Venkatesan, in the noon, visited the government hospital, the relatives of the deceased had an altercation with him.

Relatives of the deceased refused to get the corpse demanding a permanent closure of the Sterlite plant, while also demanding action against the police who involved in the shooting.

More than 7000 policemen deployed in the district.

Sterlite said the facility has been shut since March 27 when the company took up annual scheduled maintenance.

Sterlite Copper today said its factory in Thoothukudi is currently non-functional and the company is awaiting approval from the authorities to resume operations at the site.

The use of force on the anti-Sterlite protestors gathered in the Government Hospital premises has created panic in the area.

The bodies of those killed in police firing during the Sterlite Protest yesterday are holed up at the hospital. The injured are also receiving treatment at the same hospital.

The police personnel had their bags with dresses and first aid materials in the bus that was set afire in Bryant Nagar second Street.

The police used tear gas bombs and lathi-charge to disperse the protestors.

The protestors set ablaze a police vehicle parked nearby.

Despite the continuous imposition of section 144, anti-Sterlite protestors gathered near the Thoothukudi government hospital.

Now we are on Telegram too. Follow us for updates
TAGS
Thoothukudi Sterlite protest Sterlite Thoothukudi shooting