Sabarimala opening HIGHLIGHTS: Section 144 to be imposed at four places near shrine

With the protest intensifying, Pathanamthitta district administration has imposed Section 144 at Sannidhanam, Pamba, Nilakkal and Ilavunkal.

The famed Lord Ayyappa temple in Sabarimala opened Wednesday for the five-day-long monthly poojas in a surcharged atmosphere of protest over the Supreme Court verdict permitting entry of women of all age groups.

READ FULL REPORT: Sabarimala Temple opens amid violent protests, no sign of women whose ban was lifted by SC

Amid chanting of 'swamiye saranam Ayyappa' mantras, the 'melshanti' (chief priest), Unnikrishnan Namboothiri and 'tantri' (head priest), Kandaru Rajeevaru opened the portals of santum sanctorum of the shrine at 5.00 pm and lighted the ceremonial lamp.

As per the custom, no poojas would be held this evening and the shrine would be closed at 10.30 pm.

This is for the first time that the hill temple, located in the evergreen forests of Western Ghats, opened after the apex court lifted the ban on menstrual age women visiting the shrine.

With the protest intensifying, Pathanamthitta district administration has imposed Section 144 at Sannidhanam, Pamba, Nilakkal and Ilavunkal.

Section 144 of the Code of Criminal Procedure (CrPC) prohibit an assembly of more than four people in an area and restricts people from gathering in the public.

More police personnel have been rushed to Pamba and Nilakkal, said DGP Loknath Behera. He said police have also filed cases against those who attacked the journalists.

Kerala Devaswom minister Kadakampally Surendran has held the BJP and the RSS responsible for the violence. Attack on women and journalists would not be tolerated, he said.

#WATCH #Kerala: Police personnel vandalise vehicles parked in Pampa. Incidents of violence had broken out today in parts of the state over the entry of women of all age groups in #SabarimalaTemple. pic.twitter.com/xi3H4f5UUU

10 KSRTC buses were damaged. Devotees from other states were beaten up & sent back. RSS-BJP is behind all of this. Supreme Court rule applies to all, the govt is just following & implementing it: EP Jayarajan, Kerala minister on incidents of violence today. #SabarimalaTemple pic.twitter.com/XTMAYJVQIm

ANI reporter Karam Ingerlose was slapped by protesters, his phone was snatched and broken into pieces by them when he was shooting a video in Erumely. The protesters asked him to apologise for shooting the video and let him go only after he apologised.

The devotees can offer prayers till 10.30 pm today. The portals which were opened at 5 pm today will remain open till 22 October.

Congress is not attacking anybody and definitely attack on journalists is not tolerable. Those who are protesting there, are BJP and RSS people. Nowhere Congress people are engaged in this kind of hooliganism or vandalism: Congress leader Ramesh Chennithala to ANI

Network of Women in Media, India have denounced attacks on journalists, including several women journalists, at Nilakkal and Sabarimala. The group demands that the Kerala govenment take immediate action against the agitators who let violent assailants loose on journalists.

WATCH | This is a people's protest, says Sasikala Teacher

LDF government is fully responsible for any law and order situation in state. It's a very unfortunate situation, we aren't responsible. No BJP worker is involved, we're condemning that attempt: BJP leader M S Kumar to ANI on incidents of violence at Nilakkal base camp

The BJP and Congress have extended support to devotees who are protesting against the CPI(M)-led LDF government's decision to implement the verdict and not file a review petition.

#WATCH: India Today journalist Mausami Singh and its crew in a police vehicle. They were attacked by the protesters at Nilakkal base camp. #SabarimalaTemple #Kerala pic.twitter.com/R7rsSBK8fx

Police resort to heavy lathicharge at Nilakkal as a group of protesting devotees turn violent and pelt stones at police personnel and other onlookers.

#WATCH: Police lathi-charge and pelt stones at the protesters gathered at Nilakkal base camp, in Kerala. #SabarimalaTemple pic.twitter.com/DMC1ePz0l2

National Commission for Women takes cognizance of the attack on women journalists. A meeting is underway at NCW office for further steps to be taken: ANI

I can predict what is going on there, I think it is intentional,it's dirty politics they (protesters) are playing. We can't say if they are actual devotees. Supreme Court's order is Constitutional & govt is bound to implement it: K K Shailaja, Kerala Minister #SabarimalaTemple pic.twitter.com/f8V73u57Lm

A few Hindu Aikya Vedi and Ayyappa Bhakta Samajam members on Wednesday camped at the Vallakkadavu and Sathram areas, the two traditional forest paths in Idukki which the devotees use en route to Sabarimala, to prevent women devotees from entering into the temple.

RSS and BJP are taking double standards. On one hand, five advocates associated with BJP gave petition in SC over entry of women of all ages in Sabarimala temple, on the other hand, BJP is leading fight against the verdict. Now BJP trying to make it as a law and order issue: VS Sunil, Kerala Minister to ANI.

Kerala police detain Rahul Easwar in Pamba. Easwar is the grandson of the former high priest of the Sabarimala Shrine.

RSS&BJP is taking double standards.On one hand,5 advocates associated with BJP gave petition in SC over entry of women of all ages in Sabarimala temple,on the other hand,BJP is leading fight against the verdict. Now BJP trying to make it as a lawℴ issue: VS Sunil,Kerala Min pic.twitter.com/DpNWY5gm2B

Total 30 people have been arrested in Pamba, 9 yesterday and 21 today, in connection with protests against entry of women in age group 10-50 to Sabarimala Temple. Two of them have been granted bail, reports ANI.

Kerala: Woman devotee Madhavi with her children returning mid-day from her journey to #SabarimalaTemple after facing protests. Police is also present. pic.twitter.com/UBYSUFtUbI

Over 20 people including former Travancore Devaswom Board president Prayar Gopalakrishnan taken into custody in Nilakkal and Pamba for protesting against entry of women in age group 10 to 50 to Sabarimala temple.

Saritha Balan, a News Minute reporter was surrounded and attacked by a mob of 20 men who forced her to disembark the KSRTC bus she was travelling in with other journalists. According to a TNM report, as she was given police protection, a protester kicked her on her spine and verbally abused her.

Nobody can take away the devotees' right to take part in the pilgrimage: Devaswom Minister Kadakampally Surendran

We will not allow protestors to take the law into their hands. Nobody can take away the devotees' right to take part in the pilgrimage. Those using the Ayyappa chant as a cry of protest are insulting Lord Ayyappa and his devotees. As the Devaswom minister, I am not here to allow or block entry of women into the temple.

Kerala DGP Loknath Behera has urgently notified all district SPs to file cases and detain the protesters on the spot.

Tribals living in the hills around Sabarimala alleged that the government and the Travancore Devaswom Board were trying to demolish centuries-old customs by allowing entry of women in the 10-50 age group into the famous Sabarimala temple. They also claimed several rights of the tribal communities over the Sabarimala temple and the places associated with the hill shrine were forcibly taken away from them by the authorities of the government and the Travancore Devaswom Board that manages the temple.

Police detain people protesting against the entry of women in the age group of 10-50 to Sabarimala at Pamba, reports ANI.

11:54 Oct 17
A TV journalist was attacked by protesters present at Nilakkal. The channel's car was also damaged, their windshield and rear bumper were smashed and their equipment was taken, according to local reports. (Photo | TV grab)
11:51 Oct 17

Pamba: Police detain people protesting against the entry of women in the age group of 10-50 women to Kerala's #SabarimalaTemple pic.twitter.com/DLdoYMVz8J

Anil C Anilan from Sabariala reports that Rahul Easwar appears to have softened his stance on the Sabarimala protests saying that the devotees will stand peacefully and pray. They will follow the Gandhian way, he said. 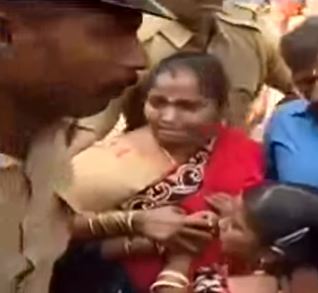 Madhavi, a 45-year-old from Andhra Pradesh, went beyond Pamba and reached the Swamy Ayyappan road. But she was sent back after protesters reportedly blocked her. (Photo | TV Screengrab) 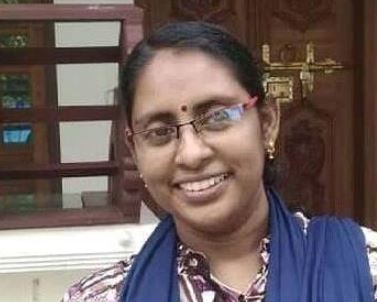 Talking to newspersons, Libi a native of Cherthala in Alappuzha district said she came to visit Lord Ayyappa temple and could not complete the 41-day penance which is needed as part of temple customs and traditions. (Photo | Facebook)

A young woman identified as Libi from Alappuzha who came for darshan at Sabarimala blocked at Pathanamthitta bus stand and was taken to Pathanamthitta police station, reports Express correspondent Anil S Anilan.

Protest against Entry of women in age group of 10-50

#WATCH: Women protest in Nilakkal against the entry of women in the age group of 10-50 to #Sabarimala temple. #Kerala pic.twitter.com/GuxDZo0R7G

There is a very strong police presence in and around Sabarimala: Kerala police chief Loknath Behera

Kerala Police chief Loknath Behera said no one will be stopped from going to Sabarimala as the chief priest of the Lord Ayyappa temple announced that women from the royal and tantri families will take part in the prayers.

It's a fight between Hindu Renaissance and Obscurantism: Swamy

Supreme Court has made a decision, but now you are saying that it's our tradition. Triple Talaq is also a tradition in that way, everybody was applauding when it was abolished. The same Hindus have come on the streets now. It's a fight between the Hindu Renaissance and the Obscurantism. Renaissance says all Hindus are equal and caste system should be abolished. Because no Brahman today is only intellectual, they're in cinema, business as well. Where is it written that caste is from birth? Shastras can be amended: Subramanian Swamy to ANI

Sabarimala temple doors to open today at 5 pm, here's what the schedule looks like

The door of the Lord Ayyappa shrine will open today at 5 pm and will continue the monthly rituals for the next five days in the Malayalam month of Thulam.

Kerala: Protests being held near Pamba base camp against entry of women in the age group 10-50 to #SabarimalaTemple pic.twitter.com/JTZ2negQ5L

I have seen fight for equality, not for slavery and inequality. On one hand, fight against atrocities by men is going on in the nation & on the other hand, women are fighting against their own freedom & rights: BJP MP Udit Raj to ANI on women protesting their entry in Sabarimala Temple.

WATCH | What is the Sabarimala verdict all about?

#TamilNadu: Pilgrims begin arriving at Nilakkal, the base camp of #SabarimalaTemple as the portals of the temple are all set to open today. pic.twitter.com/4Fw4eYvMum

Devaswom minister to hold review meeting at 11 am ahead of the Sabarimala Temple opening.

08:45 Oct 17
The Sabarimala Karma Samiti will intensify the protests in the Sabarimala issue, saying the LDF Government has “unnecessarily” created a volatile atmosphere throughout the state by rushing to implement the Supreme Court order
08:28 Oct 17

Kerala police dismantle a temporary shed made by the agitators at Nilakkal on Wednesday morning. (Photo | B P Deepu/EPS)

A couple of agitators were taken into custody, while others were forcefully evicted and the protest venue was fully dismantled.

A gathering of agitators and police deployed at Nilakkal had a heated debate at around 4.15 AM and this stand off extended for more than an hour. More police were deployed and at around 6.15 they were forced to break the gathering. (Read more)

A group, under the banner of "Ayyappa Samrakshana Samiti" is expected to intensify their protests as the Sabarimala shrine opens on Wednesday for the pilgrimage season.

Strict action to be taken

Eight people preventing entry of women to Sabarimala were arrested by the police at Nilakkal base camp on Tuesday evening following multiple incidents of protesters stopping vehicles and forcefully sending back of women passengers. (Read)