The elections are significant as it is the first assembly polls after Modi steered the BJP-led NDA to a resounding victory in the Lok Sabha elections for a successive second term at the Centre.

NEW DELHI: The voting to state assemblies of Maharashtra and Haryana ended at 6 PM, with a voter turnout of 55% and 62% respectively.

The polling for 90 Assembly seats of Haryana and 288 seats of Maharashtra commenced at 7 am and concluded at 6 pm. The counting of votes for both state assemblies will take place on October 24.

The elections are significant as it is the first assembly polls after Modi steered the BJP-led NDA to a resounding victory in the Lok Sabha elections earlier this year for a successive second term at the Centre.

It is also the first assembly polls after the BJP-led government's decision to repeal Article 370 in Jammu and Kashmir. BJP is in power on its own in Haryana and in alliance with Shiv Sena in Maharashtra.

All the major exit polls released at the end of assembly elections in Maharashtra and Haryana have predicted a victory for the ruling Bharatiya Janata Party. [READ FULL REPORT]

The former president cast her vote at Pune's NCL School.

Calling Electronic Voting Machines (EVMs), a "mockery of democracy", a local BSP leader in Thane threw ink on of the machines in Thane Head Post Office, police said. While being arrested, Sunil Khambe said that to bring back ballot papers in place of EVMs is a demand of the people of India. He also shouted the slogan "EVMs murdabad" (down with EVMs).

Bapu Pandu Gavade, a 45-year-old teacher who was on election duty in Maharashtra's Gadchiroli district died at a hospital after fainting while going towards the voting booth. Gavade, en route to the booth with a polling party from the base camp in Dehari, fainted mid-way in the morning near Pursalgondi village. "He used to get epileptic fits. He suffered head injuries after he fainted. He was taken to Etapalli hospital first and then to a bigger facility at Chandrapur. Gavade, however, died during treatment," the official told PTI.

We are confident that people will continue to support Prime Minister Narendra Modi, his philosophy and his policies, Union minister Dharmendra Pradhan said. [READ FULL REPORT]

BJP will break all previous records in Maharashtra: Javadekar

Naxal district of Gadchiroli witnesses 52 per cent voting as polling concludes at 3 PM.

A woman was injured as clash took place between two groups outside a polling booth in Malaaka village in Nuh district in Haryana's Mewat region on Monday. [READ FULL REPORT HERE]

72-member family comes out to vote in Pune!

At Kendriya Vidyalaya polling station in Pune, 72 members from a united family including their 102-year-old head casted vote on Monday.

Shah Rukh Khan and his wife Gauri cast their votes at polling booth no 177 in Bandra West, Mumbai. #MaharashtraAssemblyPolls pic.twitter.com/kp6kt9IYWw

As voting for the Assembly polls progressed across Maharashtra on Monday, reports of scuffles came in from Beed and Jalna districts, officials said late afternoon. [READ REPORT HERE]

Congress has lodged 221 complaints regarding EVMs since voting began in 288 constituencies of Maharashtra on Monday morning.

Sushma Satpute, Election Commission officer at Worli: There was some issue in an electronic voting machine (EVM) at polling booth number 62 of Worli Assembly constituency but the machine has been replaced and voting is going on. pic.twitter.com/V22ryylH7A

Deepika Padukone after casting her vote at a polling booth in Bandra (West), Mumbai. #MaharashtraAssemblyPolls pic.twitter.com/A5uiWkPVms

Union Minister Smriti Irani after casting her vote: Today's hero is Khanna ji (man standing next to her),he had served in Army. He is 93 & came out to vote. It is an inspiration,request people to come out and vote,if at 93 he can vote,who is stopping you?#MaharashtraAssemblyPolls https://t.co/56MkPFUeuk pic.twitter.com/Cy1x8Ioofu

Will focus on overall development if I win: BJP's Dadri candidate Babita Phogat

BJP candidate and wrestler, Babita Phogat on Monday asserted that her prime focus will be on the overall development of Dadri assembly constituency if she wins the seat in the Haryana elections.

Babita said, "Development in the region has been on a standstill. If I win, my focus will be on the overall development of the region be it to meet the basic necessities of the people, encouraging sports participation, improving services, health and education. I want to serve the people." (Read more)

This is a celebration of democracy: NCP chief Sharad Pawar after voting in Mumbai

#WATCH Nationalist Congress Party Chief Sharad Pawar after casting his vote in Mumbai: I request everyone to come out and vote in large numbers, this is a celebration of democracy. #MaharashtraAssemblyPolls pic.twitter.com/V920UfLZr9

Sachin Tendulkar and family cast their vote in Bandra (West)

Mumbai: Sachin Tendulkar, wife Anjali and their son Arjun after casting their vote at a polling booth in Bandra (West). #MaharashtraAssemblyPolls pic.twitter.com/SCMPcCOy03

WATCH | Haryana Assembly Elections: Voter turnout at 13 per cent till 11 am

Polling began in all 288 Assembly constituencies of Maharashtra where 3,237 candidates, including 235 women, are in the fray.#MaharashtraAssemblyPolls #VoteMumbai pic.twitter.com/eTi376hODH

Haryana elections: Voter turnout 13% till 11 AM

The 90-seat Haryana assembly elections has witnessed 13% voter turnout in the first four hours since the polling started. No untoward incidents have been reported.

Gadkari, who was among the early voters in Nagpur, said people will vote on the basis of the five-year performance of the Narendra Modi government at the Centre and the Devendra Fadnavis-led dispensation in Maharashtra.

"The BJP-Sena will have a record-breaking victory and Fadnavis will be the chief minister again," he told reporters after casting his vote. (Read more )

Mumbai's voter turnout remained below 50 per cent between 1999 to 2009 Lok Sabha and Assembly elections. In 2014, however, the tally improved and the city crossed the halfway mark in both General and state Assembly polls.

During his election speeches, Prime Minister Narendra Modi also appealed people to not skip voting and come out for vote on Monday. (Read more)

I appeal to all citizens of Maharashtra to come out and vote in large numbers: Aamir Khan 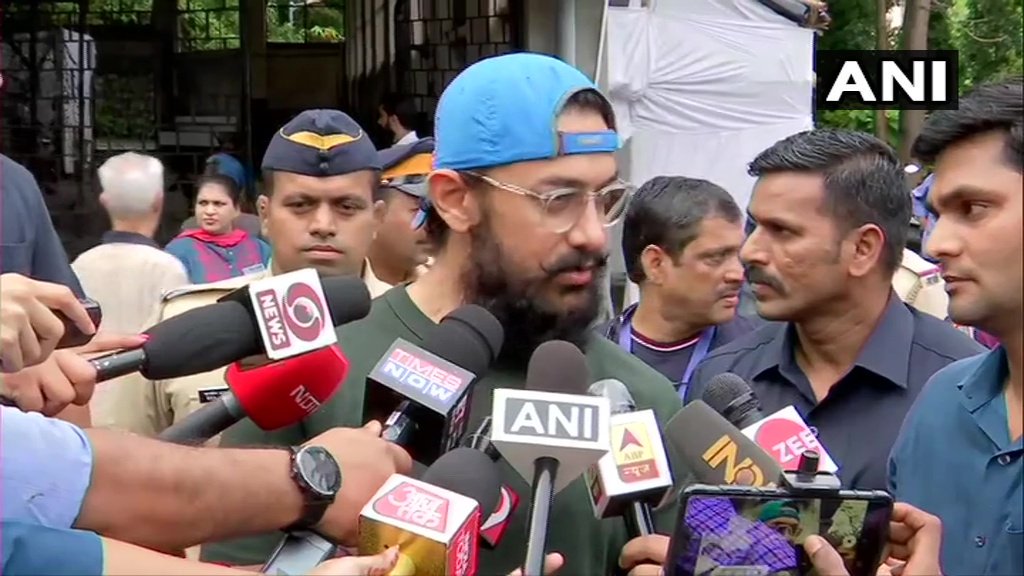 Maharashtra elections, 9 AM UPDATE: Voting in Mumbai, Thane just over 5%

Incidents of violence are being reported from Amravati. A vehicle of Swabhimani Shetkari Sanghatana has been burnt.

Polling in Maharashtra on Monday began at 7 AM and here are few of our political leaders who were early to exercise their democratic franchise.

#HaryanaAssemblyPolls: Jannayak Janata Party (JJP) leader Dushyant Chautala & his family arrive on a tractor, to cast their votes at a polling booth in Sirsa. pic.twitter.com/K9EHSM6klA

"Every vote is important for choosing the government that realizes Chhatrapati Shivaji Maharaj's dream of 'Swaraj' as the basis of development and poor welfare. I appeal to brothers and sisters in Maharashtra to vote to maintain a stable and honest government in the state," Shah tweeted for Assembly elections in Maharashtra.

For polls in Haryana, Shah tweeted, "Casteism, familism and corruption are the biggest inhibitors for the development of Haryana. Your one vote for development and nationalism will keep Haryana on the path of progress. All the brothers and sisters from Haryana vote before having food and participate in the development process of the state."

Devendra Fadnavis, who is seeking re-election from Nagpur South-West constituency, has tweeted "Voting is our Right, Voting is our Duty, And voting is an integral part of democracy. DO VOTE!" The Maharashtra CM is pitted against Congress' Ashish Deshmukh.
09:02 Oct 21

Bhupinder Singh Hooda, Congress: Jannayak Janata Party (JJP) and Indian National Lok Dal (INLD) are not factors, the contest is between Congress & BJP. Congress will get the majority. #HaryanaAssemblyPolls pic.twitter.com/3MymWnfCgo

Voting is on hold after an EVM machine at booth number 286 in Badshahpur stops working.

Haryana elections: All you need to know

Maharashtra election: What you need to know

Elections are taking place for Haryana and Maharashtra assemblies. There are also by-polls taking place in various parts of India. I urge voters in these states and seats to turnout in record numbers and enrich the festival of democracy. I hope youngsters vote in large numbers.

Now we are on Telegram too. Follow us for updates
TAGS
maharashtra elections Haryana Elections Assembly polls BJP congress