A Wushu master who trained at the cradle of martial arts is imparting the self-defence techniques at his Bengaluru centre.

In a world where success is measured by one’s pay package or the profession one is involved in, Keerthi Prasad B S has redefined triumph in his own way. His success comes from the inexorable slide he chose towards contentment and artistic relevance that would have been treated with reluctance by many of us. But listening to his heart, he unflinchingly kept following his goal of mastering Wushu—a compound of all Chinese traditional martial arts. And he did not take the easy route. He went to the cradle of Chinese Kung Fu, the Shaolin Temple in Dengfeng County, China, to learn it.

Today, he runs the Shaolin Wushu Cultural Centre in Bengaluru, where 120 students between the age of four and 60-plus learn the martial art form. The only individual in South India to earn an authentic certification from Shaolin, Keerthi’s achievement is rare not only because he shunned a probable sybaritic future, but he also opted to learn a complex art in an alien country. “The language barrier, food, strenuous training, and being away from family were quite difficult and I wanted to quit. But then I would remind myself of the very reason I had decided to be there,” recalls the 34-year-old. 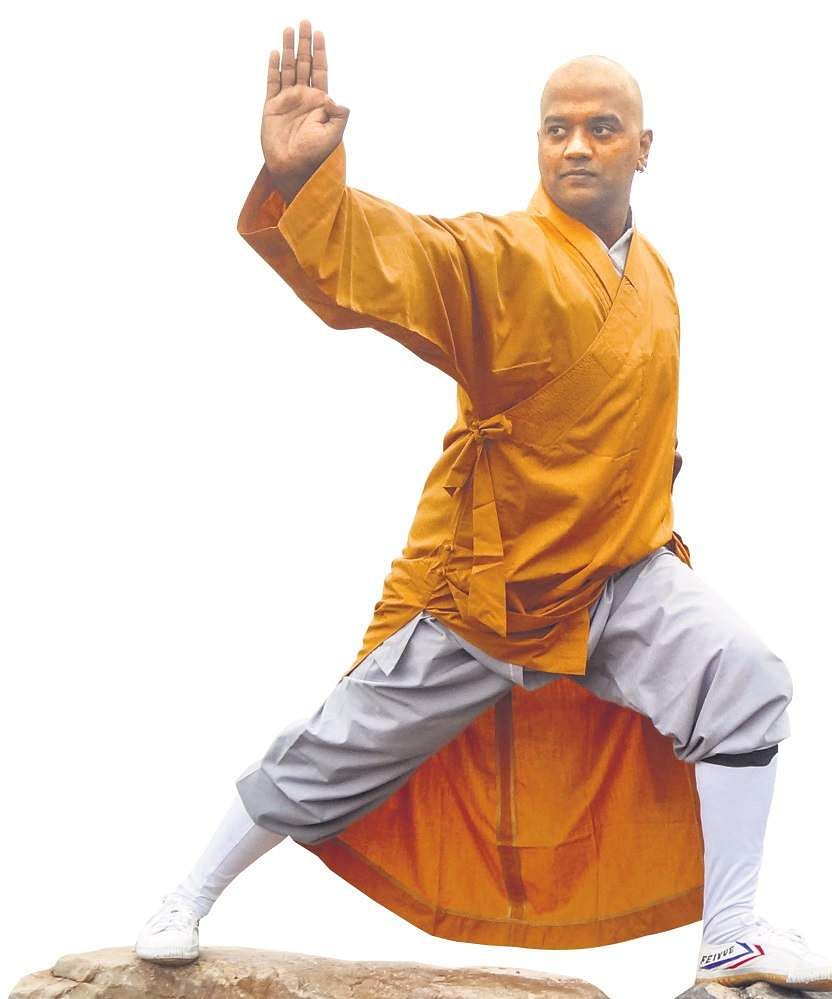 Reminiscing the time when he got hooked on to the martial arts, he says that a documentary on the history of Shaolin Temple sparked the desire in him. Trying to understand the tradition of the temple, Keerthi realised the strong Indian connection. “The temple was built by an emperor to accommodate Indian master Buddhabhadra’s preachings, who was the first abbot of Shaolin. Later, another Indian monk, Bodhidharma arrived at the temple and initiated the Chinese Chan tradition,” says Keerthi, who is the 34th generation disciple of Shaolin Temple abbot Shi Yong Xin and was named Shi Yan Ban.

After completing his pre-university education in 1999, he convinced his father about his passion and began preparing for his mission. To save money, he started freelance photography and also worked as a medical transcriptionist. Finally, he managed a student visa for six months to the Shaolin Cultural Centre, Dengfeng, an international hostel for global aspirants wanting to learn martial arts.

“We used to get up by 4:30 am. All students had to make their beds and get ready for the training, which was climbing a mountain behind the temple, where Bodhidharma meditated for nine years. An average person takes about three to four hours to climb up and down this mountain, but we had to do it in less than 90 minutes. Sometimes, our teachers would tell us to crawl down the mountain instead of jogging back, which would be challenging.”

Today, Keerthi is a Shifu (teacher). “We teach through a syllabus of traditional and modern elements, including sparring, traditional forms, weapons, chi kung—a form of gentle exercise, and a series of combat and self-defence sequences,” says Keerthi, who trained under the Shaolin Monks Reserve Force and has obtained 7th Duan Wei Certification.

The Centre has a cultural exchange programme in which Indian students can get a chance to visit and train at the Shaolin Temple. “The traditional art of Wushu makes you feel alive and responsible. It makes you feel that you can make a difference,” says Keerthi, who won two gold medals at the 2015 Hong Kong International Wushu Festival. The centre has a specially designed self-defence programme for women.
“For me, martial art has never been a business. I don’t want to claim that I am the best, but I feel bad when I see fakes cheating students with grandiose claims. The whole art is being let down by such people,” he says.