The floods nobody is talking about

The state government claims that the floods, which have claimed over 500 lives so far, are abating. But the villagers say otherwise. Voices and stories from a forgotten interior.

Last week, the monsoon made its customary splash in Mumbai, filling national television screens with graphic scenes of residents grappling with the muddy flow that had brought the city to a standstill for a day and a half. Talking heads jostled for space, and anchors harangued the authorities for not having got their acts together for the past seven decades.

The tragic story of a doctor drowning in a manhole led to a public interest litigation against the city corporation. However, faraway from the cameras and the TV screens, the Sorrow of Bihar was in sullen spate.

The flood has claimed 520 lives so far and 1.72 crore people in 19 districts of the state have been affected. The Gandak, Burhi Gandak, Bagmati, Kamla, Kosi and the Mahananda had breached the dams, engorged with the monsoon in the catchment areas of the major rivers of north Bihar and Nepal.

When the rivers get angry, the villagers scramble for high places. Eighteen-year-old Sajra Parveen of Balua village in Araria district lost her mother after her hand slipped while leading her to a safer place. The swift currents swept her away. Her body was traced the next day outside her village, stuck in one of the bamboo groves.

Sajra says, “Within minutes she was swept away. I called for help but no one turned up. Everyone was busy saving their own family.” The place was replete with such stories and many like her faced a similar dark and gloomy future.

Misery knows no bounds in this flood-affected region. This year, the devastation broke a 30-year record. The people and local administration were caught unawares. The CAG report on the floods noted that despite overflowing rivers causing floods every year, the state had delayed the approval of flood management projects for up to six years. 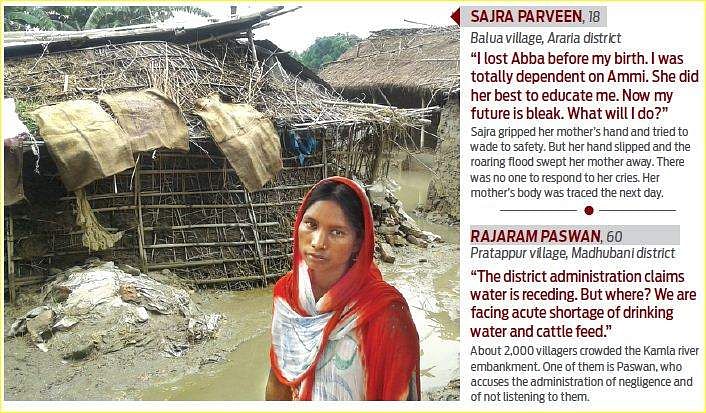 Notes a Down to Earth report: “History of floods in Bihar from 1998 to 2012 shows how strong discharges of water due to heavy rains in the catchment areas of Nepal created a strong pressure on the river embankments in India. The Kosi river, which originates in Nepal, has time and again caused floods in Bihar, including the major one in 2008 that displaced 3.3 million people and one million cattle in Kosi division.”Ordinary tragedies of ordinary people fill the tragic tides like flotsam of a disaster.

In Baijnathpur village lived two drivers and close friends Dipak and Devraj Yadav. Dipak was married last year. On hearing of the flood situation, they travelled together to bring back Dipak’s wife to their home in Baijnathpur. But they went missing along with their car.

Their bodies were found on August 21 near Godhi Chowk in Araria—a week after they were swept away. Says Dipak’s neighbour Shivnarayan, “The family has lost all the adult earning members.”
Displacement has caused a humanitarian crisis too. The situation is under control, though over 1.2 lakh people were fed in over 300 community kitchens till last week.

People had managed to escape the flood and took shelter along National Highway-57, occupying one side of the about 10-km stretch. But everyone didn’t have access to government relief. Many lived in tents made of plastic sheets for protection against the scorching sun and torrential rains.

Indu Devi of Kharaiya Basti says, “I’ve been sitting on the road with my family members since August 13. The water level is up to our necks in the village.”Meanwhile, Bihar’s Disaster Management Department issued a press release claiming that the water level is receding at several places. It also said the number of relief camps and displaced people has reduced.

However, Mohammad Jahid of Bansbaadi Panchayat has a different story: “We are waiting for the water level to descend. Till then we are compelled to stay here with our cattle. The situation is hellish.”
Even the district administration was helpless. Jammed communication, power failure, and swept away roads stopped the administration from reaching several blocks in Araria. In the main town, the situation is even worse. 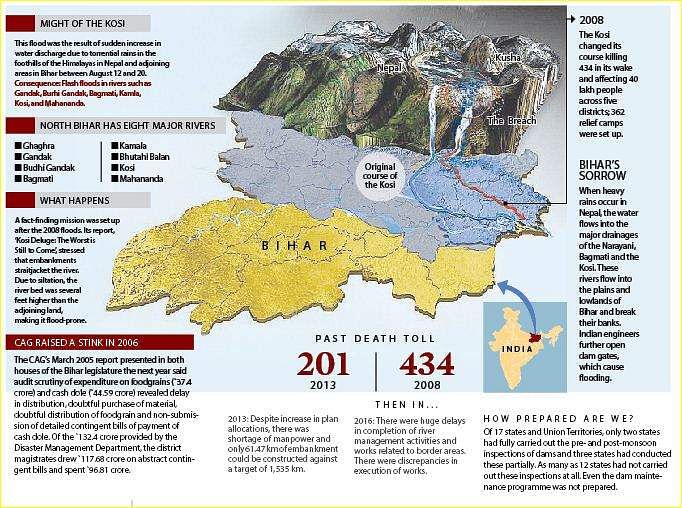 Floodwater has entered residential areas, and inhabitants—fearing a catastrophe—are migrating to safer areas. Business is crippled. “It is frightening. We had never faced such a situation before,” says local trader Naseer.

District Magistrate Himanshu Sharma says, “Our main emphasis is on restoring communication. We are not able to reach out to people stranded in Jokihaat, Palasi, Kurakanta, and Sikti blocks. As many as 600 relief camps are being run in the district. The schools have been turned into camps.”While Sharma says much is being done, victims outside a relief camp at Mahatma Gandhi School complain that their cries for help went unheard.

Sanjay Yadav of Rampur-Mohanpur village says, “We covered a distance of about 20 km in a makeshift boat of banana tree trunks and partially walked to get here. We have been asking for grains but in vain. Security men are not permitting us to enter the camp. We don’t have enough food.

There is no boat to help evacuate villagers caught in the flood.” Many others at the camp had similar tales. They said some of the affected had no option but to return to their submerged villages without grains.

About 2,000 villagers have taken refuge on the Kamla embankment. One of them is Rajaram Paswan. He says, “People from the administration claim that the water level is receding but the truth is the opposite. We are facing acute shortage of potable water and cattle feed. No one is listening.”

Amidst the tragedy, there are tales of valour by ordinary people. People from Katihar district took an initiative to help women, especially the pregnant. They reached out to them via the block public healthcare centres (PHC). They identified women who had gone into labour and helped them deliver. “We brought almost 15 such women from Pranpur block by boat and admitted them in the PHC. For many who could not be convinced to travel, we delivered fruits and other necessary items,” says Rajiv Singh, who helped organise the initiative.

The district administration had reportedly neglected the flood advisory letter issued in April by the state government to make pre-flood preparations.Social activist Ashish Ranjan from Araria says, “The local administration and the state were not prepared for this kind of flood. This inept handling caused a lot of misery. Foodgrains stored by the farmers have been destroyed, now the people do not have anything to eat unless the government takes the initiative of making food available.”

The challenge is not only limited to the flood period. There are no grains in store. Most of the cattle have been lost to the flood and the next harvest is six-seven months away.

Records show that flood and heavy rainfall choked the railway link between the North-east region and New Delhi via Bihar. It remained snapped for about five days as flood waters continued to inundate and threaten tracks in different parts of Bihar. More than 40 trains were cancelled, short-terminated, rescheduled, or stopped.

The devastation is too heavy to be restored in many months to come. State Water Resource Minister Rajiv Ranjan Singh says, “Unprecedented rainfall in Nepal caused flashfloods in Bihar. Around 600-700 mm rainfall within 72 hours in Nepal and 300 mm concurrent rainfall in the same period in Purnia, Araria, Katihar, Kishanganj, Supaul, and Madhepura districts led to the floods.”

Even with this scale of devastation all around, Disaster Management Minister Dinesh Chandra Yadav gives nine out of 10 marks to the government for carrying out rescue and relief works. He claims, “This year’s flood was unprecedented. We were prepared for the conventional flood, which occurs every year. Yet under the supervision of the CM, relief and rescue work started at the earliest.”

The water level is slowly receding in most districts. However, the Bagmati in Sitamarhi and Muzaffarpur, the Burhi Gandak in Samastipur and Khagaria, and the Kamla in Madhubani are still flowing above the danger level. Slowly the wound will heal, but the scar will last a lifetime.

The government will have to take several steps to rehabilitate the people for which Central assistance has been sought. Prime Minister Narendra Modi during his visit to the flood-affected areas on August 26 announced relief of Rs 500 crore. The state has sought Rs 10,500 crore.
Flood situation in rural Madhubani district’s Jhanjharpur sub-division has worsened; breaches in embankment of the Kamla river have led to flooding of Pratappur village. The villagers have been forced to take shelter on the embankment.

A grandmother in her late 70s was seen crooning in the local Maithili language to her two restless, hungry grandsons. Her melodious voice battled the rainy wind blowing over the roaring waters of the Kamla. The song was an appeal to the river to becalm herself.She says, “My grandchildren are afraid of the roar of the Kamla. So I’m praying to her. She entered our village and took our huts with her. I’m praying to her to calm down, promising to get her jewellery from Patna and also dessert in return.”When stories of corruption are tearing up the headlines in Bihar, bribing a river in spate shows the desperation of what people endure time after time, year after year.