Even at the height of despair, the narrative holds out the promise of hope

Following the monstrous success of The Fault in Our Stars, John Green is back with Turtles All The Way Down. As may be expected from this author, it is one dark and heavy tome that deals with adolescent angst, abandonment, mental disability, death, and despair. All this, as seen through the eyes of Aza Holmes who is afflicted with severely invasive anxiety, obsessive compulsive disorder and a bad case of germaphobia accompanied by an overriding fear that she is going to die of clostridium difficile. 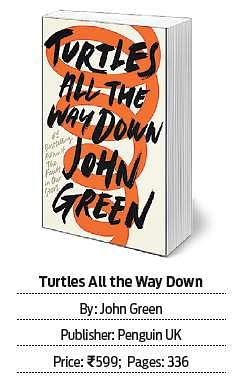 Poor Aza certainly does have a hard time. But then again so does the reader who is dragged into her nightmare reduced to waiting with mounting unease as Aza becomes trapped in an ‘ever-tightening spiral of thoughts’ tormented relentlessly to the point where she wants nothing more than to escape them in their entirety or for it all to end, whichever happens first.

Green is too good a writer to glamourise or romanticise any of this. Instead he dwells morbidly on the inescapable awfulness of it all. Aza repeatedly opens up a crack on her middle finger with her thumbnail to check if she is real. But then she has to keep the wound bandaged to prevent infection, that is, if there isn’t one already.

So she feels impelled to open up the scab to drain the yucky stuff that may or may not be in there, clean it up with sanitiser and reapply the bandage. Then, after an all too brief period of relief, the process begins again. And again.

Mercifully, there is Daisy, the zany and entirely idiosyncratic best friend who writes fan fiction based on Chewbacca and Davis, a love interest who is knee deep in trouble himself, consumed by the loss of his mother and the recent trauma of an absconding father. Incidentally, there is a $100,000 reward for information for the man and Daisy strong-arms Aza into a reunion with Davis who used to go with her to the appropriately named ‘sad camp’ in the hopes of unearthing a clue and pocketing the money. Soon, a romance is kindled.

Aza is not very good at relationships, mostly because she believes herself to be fictional and a mere ‘skin-encased bacterial colony’. And yet, the fragile bonds forged with varying levels of success with the people in her life serves at once as the lifeline that keeps her tethered to her sanity while also doubling as the whip that flagellates her fragile psyche bloody.

Daisy has created a somewhat unflattering character in her fictional yarns to cope with the supreme self-involvement of a bestie who is not quite in the pink of mental health. This sis-mance is so beautiful, it is gut-wrenching. I hated when they got into a tiff and my heart soared when they reconciled with Daisy saying, “I want to be buried next to you. We’ll have a shared tombstone.”

The love story between Aza and Davis is a sweet and messy one. Even when they do clichéd stuff like stare at the stars, what should have been a cheesy moment somehow becomes stirring and intimate. You want them to be the turtles in the title even when their romance runs into troubled waters with Aza pulling back every time they kiss because she cannot help but know that “around 80 million microbes are exchanged per kiss”, much to her lover’s anguish. He realises that she can only like him from a comfortable distance like when she stalks him in cyberspace or wants to ‘facetime’ with him.

A plot point that ultimately gets resolved is the fate of the runaway Dad but after entire stretches spent with Aza’s runaway thoughts that refuse to leave her alone hissing and spitting like the serpentine locks of the Gordon, Medusa, the reveal feels somewhat jarring. That is a slight imperfection among a few niggling ones.

Green overdoes it with the faux profound teenybopper poetry and one too many tired old tropes that are practically prerequisites for Young Adult fiction. But when he is fabulous, the man goes all the way and nowhere is it more evident than the ending which is far from happy yet it couldn’t be more perfect because even at the height of its hopelessness it holds out the promise of hope. In other words, it is so real it hurts.

Now we are on Telegram too. Follow us for updates
TAGS
The Fault in Our Stars