The descriptions of how during the Nazi occupation of Russia, he flew weapons and supplies to Stalingrad for the besieged Red Army and the rescue of stranded officers and civilians out of Rangoon under dangerous conditions and landing Indian troops in Srinagar during the Pakistan invasion of 1947 make gripping reading.

Once he overheard a British official making a derogatory statement about the skill of Indian pilots. He landed the plane promptly and left him to walk. 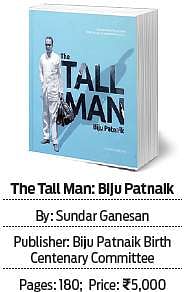 The book is written for those outside the state; few know him as an entrepreneur who started Kalinga Airlines. After the 1977 elections, Biju babu was one of the architects of the Janata Party.

The king, who was also the kingmaker, was instrumental in making VP Singh the Prime Minister. However, the book would have been richer if it had more details about his political career and a mass leader about whom there are more stories than one can remember.