Postcards from a blurred past

Social media is a world in itself, almost inseparable if not in control of our realities.

Two decades ago, in 1997, the first-ever social media website, SixDegrees.com, came into existence. But today, social media is a world in itself, almost inseparable if not in control of our realities. Though it is recent, the founding principle behind this juggernaut dates back to centuries and is reflected in the prodigal rise of the picture postcards in early 20th century.

The exhibition, Globetrotters, at the Art Heritage Gallery at Triveni Kala Sangam in Delhi till November 17, has brought together 250 postcards, which offer a unique insight into the pre-Independence India, leading up to the emergence of a new social network.

The exhibition, divided into various segments has four sections dedicated to the four metropolitan cities of Mumbai, Kolkata, Chennai and Delhi. It features 125 postcards each from the collection of deltiologist Omar Khan and the photography collection of the Alkazi Foundation for the Arts—founded by Ebrahim Alkazi. These postcards tell the tales of how the cities were anchored in identities, be it imperial, industrial or coastal, in their own way. Mumbai, for example, is represented by the photos and paintings of the Shivaji terminus, Delhi by its Mughal structures and Chennai through its docks. 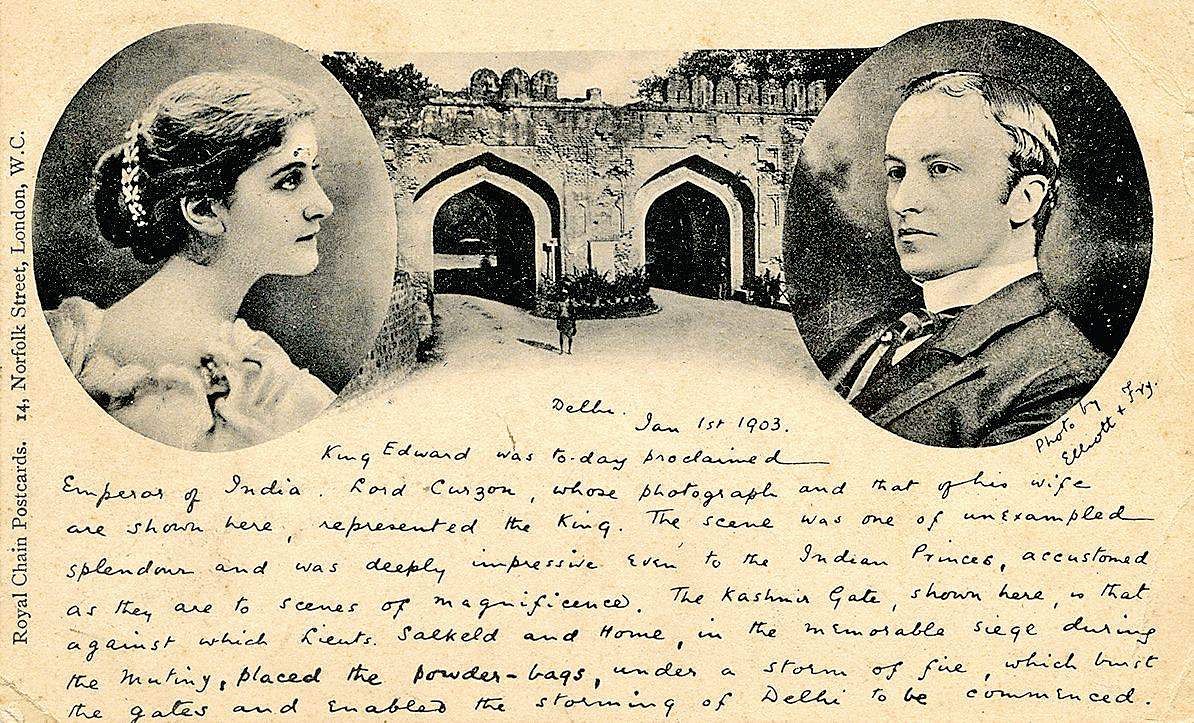 San-Francisco-based Omar Khan, who has been collecting postcards since 1995, has over 15,000 of them between the period of 1892 and 1947. Though, he says, he never had the chance to count them, “I intend to work on it further so that it can be turned into an archive that offers valuable historical insight.”

The postcard made its first estimated appearance in India in 1897. Reminiscing how Omar Khan acquired his first postcard, he says, “It was at a Paper and Postcard Fair in Concord, outside San Francisco in 1995. I had seen an advertisement for the show, and being a photograph collector, I went to the show. To my surprise I found a lot of India cards, and this one was special, as it transported me right back to my grandmother’s house at 5 Queen’s Road in Lahore, when I was a little boy, and she sat on the verandah shelling peas or rolling chapati dough with a servant girl.”

For an exhibition that charts a period through colonial rule, it is natural there will be oriental narratives and counter-narratives, the battle between local and exotic. Rahaab Allana, curatorial adviser for Alkazi Foundation, says, “The postcard wasn’t just a personal token then, it had a social and political consciousness as well. If you look at postcards of the Bengal famine circulated in the Kolkata region, you can see them as agents of information about the serious issues. Similarly, there were the things that channelled the independence movement. And the reason we wanted to display this collection in the age of new popular media was to enable a journey back into an era of ubiquitous networks.”

The last portion of the exhibition takes one through the independence movement, with beautiful, grainy prints of the likes of Mahatma Gandhi and Subhas Chandra Bose. Intriguingly, it is also flanked by a section of cards that were circulated in the North West Frontier (now Pakistan) at that time. “It was important for us to have that section, to be able to cross a frontier of sorts ourselves. Postcards can offer you a dictionary that helps you think of a world without borders. And it is crucial for a time when culture is being deployed as politics,” says Allana.

Omar, whose last exhibition  was in Mumbai, says his search to gather more postcards is on. “I continue to collect a few each week. The collection covers India, Pakistan, Sri Lanka and Myanmar, with some from Bangladesh, which sadly lacks in postcards in the pre-1947 period. I plan to restore them and put them online as a free, properly categorised resource for scholars, historians, and artists,” he adds.
With such small, but significant efforts, Omar wants to keep the art of postcard collection alive and people connected to their past.

Now we are on Telegram too. Follow us for updates
TAGS
social media