A postcard from Saxony

Cities are built on the   bedrock of history. 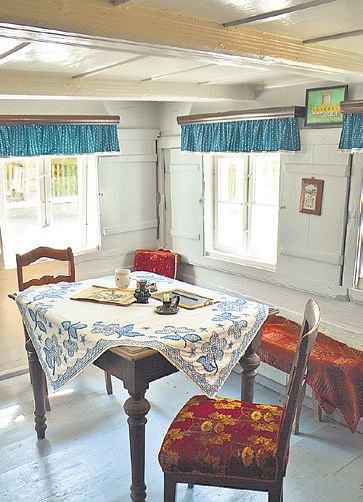 Cities are built on the   bedrock of history. Their sights record the passage of events and time. Then there are the villages where time stands still. Like Obercunnersdorf in Saxony where a picture postcard fairytale house that looks inviting enough to be occupied in real life reminds the traveller of the immutability of the years. Stands in the centre of the German mountain village one of the most-photographed half-timber houses in  Germany, having graced calendars and catalogues. It has seen the passage of two centuries and has been meticulously renovated with grey slate walls and a log cabin set in a lush garden.

In Obercunnersdorf village, half-timber houses are an architectural specialty that date back to the era between 1700 and 1830. Most of them are clustered in the village centre. Further away is Schunkelhaus, the smallest house in the village. A family of seven used to live in this toy space that consists of a living room, a tiny bedroom and a washroom. Located beside a sparkling stream, this house with a well is open for public view.

All the 260 half-timber houses in Obercunnersdorf village follow a similar architectural style. Each of them starts with a log cabin for the living room, which is also the only heated room and naturally the epicentre of family activity. The warmth protects the occupants from the icy embrace of winter when temperatures dip to -15°C.

On top of the cabin is the master bedroom. Next to the log cabin is a room usually made of stone and was used as a stable when horses and horse-driven  carriages were the norm. The stable and log cabin are connected by a hallway, which also functions as a kitchen. The timber frame has a stuffing of clay, hay and straw to keep the house warm. Schunkelhaus’s living room has a loom reminding visitors of the weaving heritage of the village. Connecting Obercunnersdorf with the rest of Germany stands a rail bridge that was built between 1846 and 1848 for trains carrying woven fabric to the coast. However, with the advent of industrialisation, weaving took a backseat. Instead, the cargo became industrial products and metalware.

The better-off residents of Obercunnersdorf have added a smoke room above the kitchen. The smoke from the chimney is useful for treating meat and fish. The chimneys of Obercunnersdorf homes lean from right to left to avoid rain water from coming down into the house. The houses have cellars to keep the wine and food cool.

Restaurants in Obercunnersdorf serve some of the best food in Upper Lusatia. The beer garden of Bergwirtschaft Bieleboh, the flower-laden box windows of Scharfe Ecke and the coolers at Gaststatte Blaue Kugel are pastiches that represent the culinary culture of Saxony.

Upper Lusatia has many eating places and hotels. Inn Quirlehäusl is one such half-timbered house with a fireplace and comfortable furniture that offers homemade German cuisine cooked with local ingredients like asparagus and rhubarb.

The little jewel on the Teutonic tourist map has been touched by change, but the constant is its village community that keeps tradition alive by preserving its heritage.

How to reach: Located in Saxony, Obercunnersdorf is accessible by road from major German cities. Dresden is the nearest airport.

Attractions: In the village, one can visit the half timber houses, church and rail bridge.