Each work is a synthesis of philosophy, aesthetics and the artist’s years of introspection.

In artist Shampa Sircar’s new body of work, her inner monologue—tied intrinsically to her sense of self—leads to many revelations. Aptly titled ‘Antardhwani: The Inner Voice’, Sircar’s works glorify the idea of oneness, the power of unity of existence, and the imperative need of mankind to harmonise with nature.

To reach the depths of that inner voice within her, Sircar had to make many sojourns outside her body. Travelling far and wide, she has come to comprehend the language of this inherent dialogue that seeks to be heard. “What you think, how you act, and why you are a certain way, is all a sum total of your many life experiences. It is a manifestation of this internal oneness, and that’s what my paintings profess,” she says.

Much of what you see on the large canvasses are symbolism inspired by the interdependence between man and his natural cosmos. “It’s an effort to make people reconnect with it by emphasising the point that there is no line of distinction between the two. The energy that flows in and around you is the energy inside you, so nature must be treated with respect if not reverence,” says Sircar. 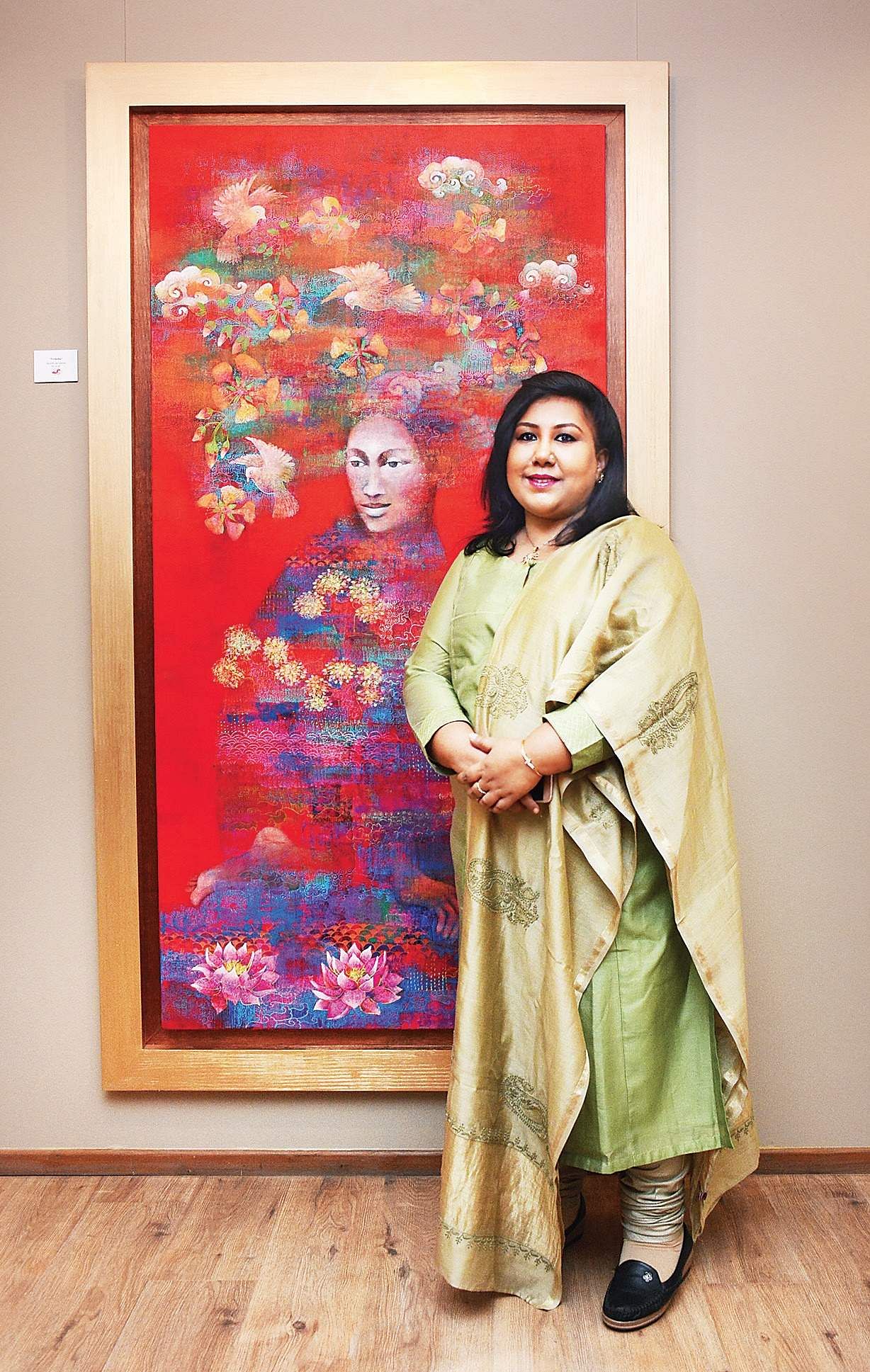 Each work is a synthesis of philosophy, aesthetics and the artist’s years of introspection. Many of the motifs are related to the tankas and murals that she came across during her multiple visits to Ladakh, Spiti and surrounding regions. There are illustrations of the lotus flower, swans, Buddhist deities and others such, embedded in a muted colour palette of mustard and gold. In some works, there are spurts of colour which go back to the artist’s observation of the landscape of these places that, largely speaking, were devoid of colour, and then suddenly there would be unexpected bursts of brightness. “The roughness and texturing were essentially developed over the last 10 years of travelling to the interiors of India, especially where there are gompas,” she says.

All these visits came with vast amounts of realisation about life, the universe and human nature. Carrying the responsibility of all the knowledge, it then became imperative to share it with the world.Sircar is also a practioner of Vipassana. She says the quietude that came with it enabled her to release all impending mental scenarios stored in her subconscious mind. What came to the surface after hours of thought-watching were shivers of sensations that had no form.

There was no demarcation between her body and the energy it produced. With that understanding, she began reproducing the same sensations on the canvas highlighting the oneness of all emotions. “City life can make you feel invincible, however when you’re one with your true nature or the natural world, you realise you are not even a particle of dust,” she says, leaving us with a short poem she recites to herself every day. It says: ‘Sometimes when you’re feeling important, sometimes when your ego is in bloom, sometimes when you take it for granted that you are the best qualified in the room when you think your going will leave an unfillable hole, just follow the simple example and see how it humbles your soul. Take a bucket, fill it with water, put your hand in it up till your wrist and pull it out. The water that is remaining is the measure of how much you will be missed.’

Antardhwani: The Inner Voice
On view from 11 am to 7 pm till February 28, at Chawla Art
Gallery, Saket, Delhi

Stay up to date on all the latest Magazine news with The New Indian Express App. Download now
(Get the news that matters from New Indian Express on WhatsApp. Click this link and hit 'Click to Subscribe'. Follow the instructions after that.)