It is not every day that you come across a novel which grips your attention.

If you were to sit down, be advised: inhale deeply before you read this gripping tale that seems all too familiar, when two twin sisters, Layla and Tanya, are found starving to death in their plush apartment. Naturally, the discovery sparks the usual piranha-like media frenzy that we have got so used to in our times. For it’s not every day that the Press sticks its hands on to a juicy story. The two 20-something women, one half-dead, the other not speaking, have been living in a state of despair and chaos. Theories abound, but journalist Raman seems to be in no mood to pursue the leads. Then Tanya begins to sing like a canary and as she talks to him, this dark tale takes you through their lives. 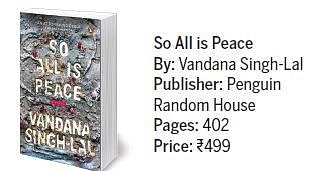 A little boy, all of seven years old ‘has seen two women. One tall and thin, moving or sitting close to the door, and another far behind her, lying so still and straight and dark and shrivelled that she could be the Egyptian mummy from the encyclopaedia that he pores over often... the boy is sure that the woman is dead.’

As Tanya’s tale unfolds, the dark truth behind it unpeels layer by layer as the author takes an unflattering look into the very heart of what essentially makes us human. We are the only creatures prey to desire, love, lust, fear, and grief. Our decisions are based on shifty ground.

As a reader, I had the strange feeling that I was on the centre stage as I experienced the plot, characters and scenes unfold around me, keeping me engaged as if I were a participant in the story. Powerfully imagined, compellingly written and deeply thought-provoking, it remains a magnificently realised tale of twin women fighting for their place under the scorching blaze of the midday sun. Of course, society is predictably unfeeling. But this only helps the tale in packing a punch: full of intelligence and emotion, yet remaining cerebral and tender.

This romp in the darkness takes you through unspeakable emotions and actions, as it explores sibling ties between twins and their intertwined links. A novel to savour and share, even as you find yourself gasping for breath at the trivial inanities and innate cruelty of the times we live in.

It is not every day that you come across a novel which grips your attention. But the book does not lag behind or disappoint. On the contrary, it takes you by the cuff on a roller-coaster ride that will hold your attention through its 400-odd pages. To me, the writing was effortless, easy and conversational, yet without losing out on details in descriptions. The pace is set from the word go. You, the reader, will find yourself smack in the centre of the action experiencing the plot, as the characters and scenes unravel in cinemascope around you. What a great debut!

Stay up to date on all the latest Magazine news with The New Indian Express App. Download now
(Get the news that matters from New Indian Express on WhatsApp. Click this link and hit 'Click to Subscribe'. Follow the instructions after that.)
TAGS
so all is peace