Gopa has found her vocabulary in miniature court art which she challenges with abstract forms, technology and outlier material like edible beeswax here.

Gopa has found her vocabulary in miniature court art which she challenges with abstract forms, technology and outlier material like edible beeswax here. The unconventional 33-year-old artist who makes her own dyes says, “My work attempts to address social and individual anxieties through subversive idioms. My images and forms are metaphors reflecting the social and political concerns of my surroundings and time. Her favoured surface is the ‘Sanghaneri paper’, which has the versatile potential for experimentation while her innovations with miniature is a mischievous exploration of communicative idioms. She says, “My material depends on the subject of the work. My engagement and understanding of it allows me to manipulate it better. I use natural and at times edible material to emphasise different historical and cultural context.”

Unlike Gopa’s socio-political references, Shilo explores nature, intimacy and mythology through her work. She has a yen for photo performance. Art for her is a bridge connecting different divine narratives from the Koran, the piety of Kannada poet Mahadevi Akka to the 12th century epic Gita Govinda by Jayadeva. Eclectic motifs from Hinduism and Islam shimmer with magic realism, as Shilo engages with diverse mediums such as gold-leaf encrusted wood-cut murals, water colour and embroidery on plastic. Stefania is known for segueing videos and pictures into a single narrative to communicate powerful messages. Here, ‘Let’s Buy The Island of the Females’ by Stefania comprises portraits, photographs and multimedia to post a commentary on female land-holding status—globally only 30 percent of land is owned by women, which drops to a mere 13 percent in Asia. 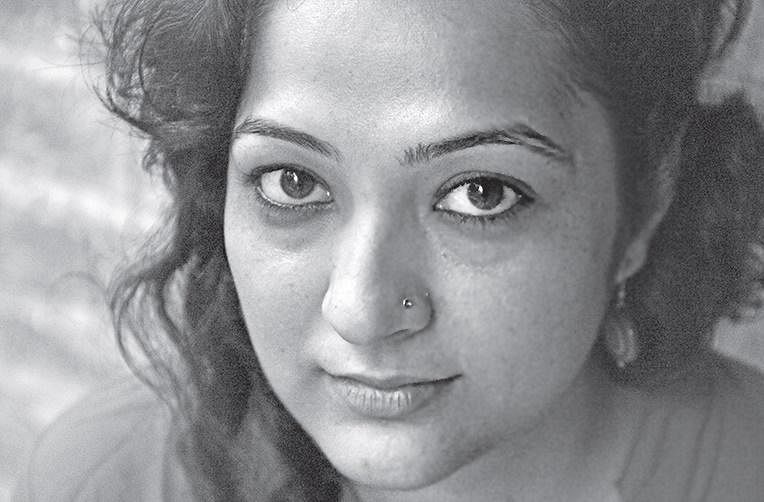 The sheer versatility of the artists is breathtaking. Take Natascia’s installation named ‘Alfabet’. She is a culinary aesthete and teacher, who specialises in custom-creative design services involving stage design and gourmet meals, and works with food companies to identify and refine culinary and nutritional habits. In the current exhibition, she collaborated with local chefs to create ‘edible hands’  about the ritual significance of gestures of Italians and Indians. Marta’s video animations of hand drawn work here celebrate the realm of magical forests. The curators are iconoclasts themselves: Myna Mukherjee  and Davide Quadrio had participated in the last India Art Fair where cops took down an art installation which was accused of being an anti-CAA statement; the piece in question is now missing. The booth at the India Art Fair was also sealed. Says Gopa of the current show, “Many times, the value or importance of a thing becomes evident only in their absence.” It has only made the art fonder.

When & Where
Visions in the Making Venue: The Italian Culture  Centre, Delhi Till: April 15 Time: 10 am to 7 pm

Stay up to date on all the latest Magazine news with The New Indian Express App. Download now
(Get the news that matters from New Indian Express on WhatsApp. Click this link and hit 'Click to Subscribe'. Follow the instructions after that.)
TAGS
Italian Embassy Cultural Centre