In his first outing as the BJP's newly-anointed prime ministerial candidate for 2014, Gujarat Chief Minister Narendra Modi Sunday told Pakistan to "shun its anti-India attitude" and called upon voters to bring in an "effective government" in New Delhi in the next polls.

Having attracted a massive crowd in this south Haryana town, 90 km from New Delhi, Modi in his 65-minute speech sought to project a national outlook - speaking about relations with neighbours, terrorism, defence, secularism and vote-bank politics. 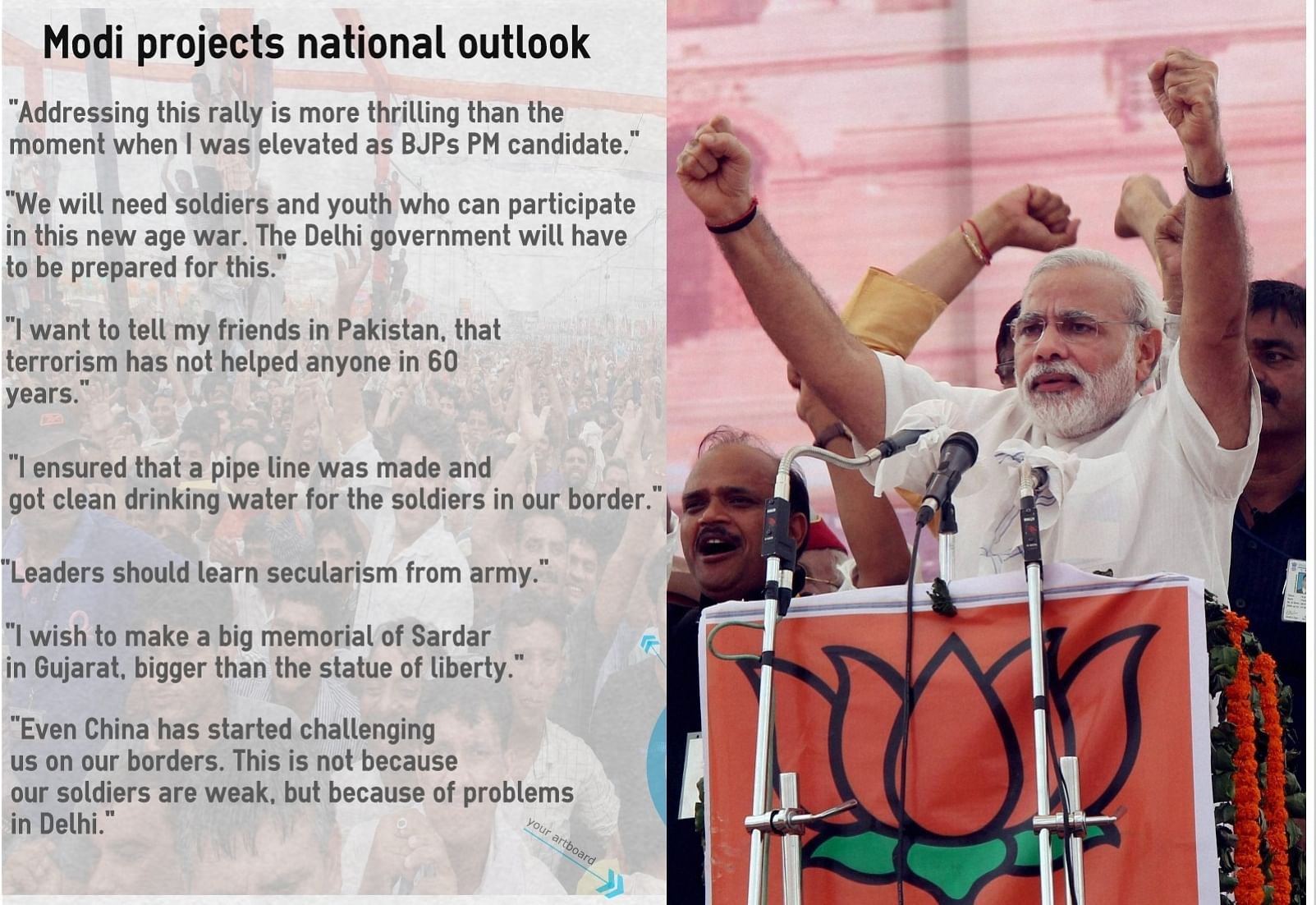 Scheduled weeks in advance for ex-servicemen, Modi's rally turned out to be his first big political outing immediately after the Bharatiya Janata Party (BJP) Friday announced his name as its prime ministerial candidate for the 2014 general elections.

The massive crowds at the rally cheered Modi every time he made an important point.

On Pakistan, Modi said that promoting gun culture had done the neighbouring country no good over the last 60 years.

"I can say with authority that if this happens, Pakistan will see the progress that it has not seen in the last 60 years," he added against the backdrop of a huge photograph of the parliament building.

He said Pakistan has "converted India into a war zone through its war mindset and support for terrorism".

"Earlier, the war used to take place on the border. But when you (Pakistan) could not defeat the Indian Army, you started going for killing innocent citizens."

Amid cheers, Modi, dressed in a white kurta-payjama, went on: "You cannot progress with anti-India tirade. You cannot progress on this basis... For your own interests and for the youth of your country, you should rethink the wrong path you have chosen in the last 60 years and step back."

Calling for throwing out of the United Progressive Alliance-led (UPA) central government, he told the gathering: "You should challenge the government in Delhi as it is ineffective."

He said that neighbouring countries like Pakistan and China were trying to create trouble on the border (with India) and the weak policies of the central government were helping them.

Without naming anyone, Modi said that those who talk about secularism were doing sot only for vote-bank politics. "They should go and see how the army is a symbol of secularism," he said.

Taking a dig at some "big countries", he said they were indulging in being "selective on dealing with terrorism".

Thousands of people, including former soldiers, turned up for the rally. Seeking to reach out to the servicemen, Modi asked the UPA government to bring out a white paper on the long-standing demand of former soldiers for "one rank one pension".

He also complimented scientists on the successful launch of the nuclear-capable Agni-V missile Sunday morning.

As Modi got on to the dias, he was greeted with a thunderous applause by the crowds despite sweltering heat inside the tented rally venue.

"There is visible enthusiasm to listen to Modi among people, including the large number of ex-servicemen who have come from different parts of Haryana," said Gen. V.K. Singh.

Modi flew in to Rewari in a helicopter from Delhi.