KHONOMA (NAGALAND): “MY grandfather said that by killing Mahatma Gandhi, Indians had sealed the fate of Naga independence,” said Methahetho Chase, grandson of Naga National Council chief Angami Zapu Phizo, also known as the ‘Father of the nation of Nagas’.

A resident of 3,000-strong Khonoma village, 22 km from Kohima, Chase says Phizo had met Mahatma Gandhi before Indian independence, after which he sought verbal support for Nagaland’s independence. A close friend of Subhash Chandra Bose, Phizo allied with the Japanese in Burma during World War II. 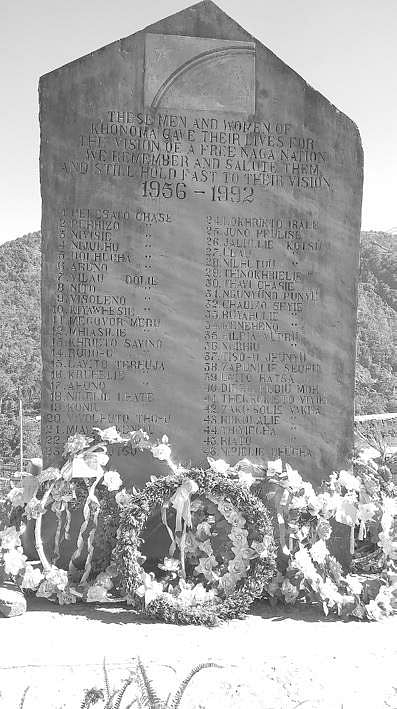 From being a cradle of resistance to both the British and Indian rule, Khonoma has come a long way to become Asia’s first green village. The Angami Naga village of 600 houses was one of the last villages that fought a bloody war with the British from 1878-80 against imposed land tax rules.

“Christianity was introduced in 1897 by American Baptists after Khonoma’s defeat,” Chase added.
“Until Shillong Accord of 1975, Indian Army had sealed the village. Even a child needed permission to relieve himself/ herself in the fields. Those were the heady days. We had to undergo tremendous torture at the hands of the Indian Army,” he said.

However, times have changed. The Indian Army has become friendly and helped construct an array of community assets from public toilets to irrigation facilities. Gradually, the birthplace of Naga nationalism has moved on to impose a total ban on hunting, and jhum cultivation, without which practically no Naga village can survive. Now, waste generated in the village is segregated and disposed, majorly by incineration.

“It was a very difficult task in the beginning to persuade people to give up hunting and jhum (shifting) cultivation. But, in 1998, the Khonoma Nature Conservation and Tragopan Sanctuary (KNCTS) was established by the Khonoma village council to protect wild animals and birds, including the rare tragophan bird,” said Chase, then vice secretary of the village council.

“Over the years, we have conserved over 123.23 sq km of forest in Khonoma village, and people practice wet rice cultivation in terrace farms,” he said
Owing to its history of resistance to outsider rule, Khonoma has over 1,000 country-made guns, despite its ban on hunting.

“After death of Phizo, a lot of factions of the Naga Army emerged, the Isak-Muivah, Khaplang factions and so our movement weakened. No one treads the path of Phizo. Added to that, the young generation is after easy money. Nobody wants to struggle for the Naga cause,” he said.