Delhi Lt Governor Najeeb Jung gave a surprise to all with his resignation on Thursday, ending a nearly three-and-half-year-long tenure.

NEW DELHI: Delhi Lt Governor Najeeb Jung gave a surprise to all with his resignation on Thursday, ending a nearly three-and-half-year-long tenure. Despite a bitter confrontation with the ruling AAP government on a whole range of issues, Jung thanked the Delhi Chief Minister Arvind Kejriwal and his government as he stepped down and the courtesy was returned by the State government. 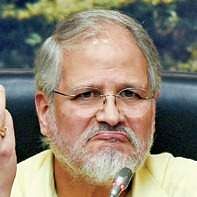 According to the Ministry of Home Affairs, to which the Lt Governor reports, the decision came as a surprise also to them. “He met me on Tuesday, but did not give any indication of submitting his resignation. I had another meeting scheduled with him for tomorrow.

Now, I have come to know about his resignation from the media,” says Union Home Secretary Rajiv Mehrishi said. Jung had reportedly applied for leave between November 25 and January 1, but resigned before that.

Kejriwal said the decision surprised him. “Jung’s resignation is a surprise to me. My best wishes in all his future endeavours,” he tweeted. Deputy Chief Minister Manish Sisodia said despite several “bitter-sweet experiences, I can say that we have worked very well for Delhi with Jung.

Good wishes for his future.” Meanwhile, Delhi Congress Chief Ajay Maken alleged that Jung was unceremoniously removed and demanded that the Centre make public reasons behind the decision. “Was he removed to bring someone who is close to RSS? Was it done considering the upcoming municipal polls? Jung is an able administrator,” he said.