No Joke: Indian Economy to Grow Fastest in the World

After 7.2 per cent economic growth in 2014-15, Economic Survey says expansion in economy will be 7.6 per cent in the current fiscal, the fastest in the world.

NEW DELHI: Ahead of the Union Budget, the Economic Survey today termed the external environment as challenging but projected a 7-7.5 per cent GDP growth rate in the next fiscal which could accelerate to 8% in a couple of years.

The Economic Survey for 2015-16, tabled in Parliament today, also made a case for carrying forward the reform process to achieve macro-economic stability.

In spite of challenges and a lower-than-projected GDP growth rate during 2015-16, "the fiscal deficit target of 3.9 per cent of GDP seems achievable," it said.

However, it cautioned that if the world economy remained weak, India's growth will face considerable headwinds.

On the domestic front, two factors can boost consumption: increased spending on higher wages and allowances of government workers if the seventh Pay Commission recommendations are implemented and the return of normal monsoon. 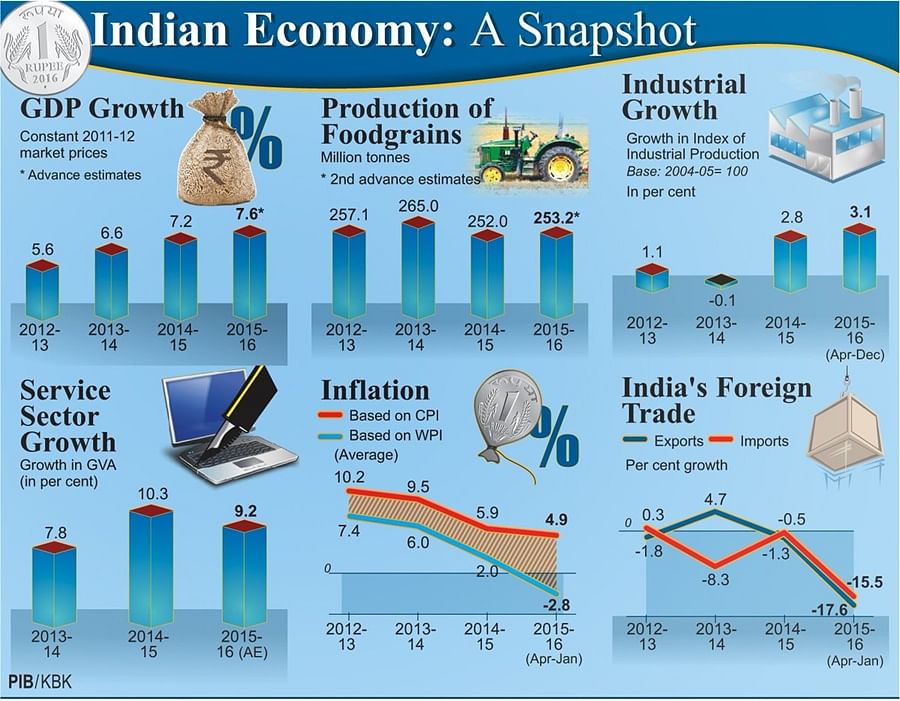 At the same time, the Survey enumerated three downside risks: turmoil in the global economy could worsen the outlook of exports; contrary to expectations, an oil price rise would increase the drag from consumption; and the most serious risk was a combination of these two factors.

"One of the most critical short-term challenges confronting the Indian economy is the twin balance sheet problem -- the impaired financial positions of the public sector banks and some corporate houses. The twin balance sheet challenge is the major impediment to private investment and a full-fledged economic recovery," the Survey said.