India is expected to sign over $5-billion agreement on Saturday with Russia for five S-400 surface-to-air missile systems to give boost to country’s air defence.

NEW DELHI: Amidst growing tension between India and Pakistan along the western border, New Delhi is expected to sign over $5-billion agreement on Saturday with Russia for five S-400 surface-to-air missile systems to give boost to country’s air defence.

According to defence sources, an agreement in this regard will be finalised on the sidelines of the BRICS summit in Goa, where Prime Minister Narendra Modi will meet Russian President Vladmir Putin. The development assumes significance on the backdrop of Russia’s recent joint military exercise with Pakistan. 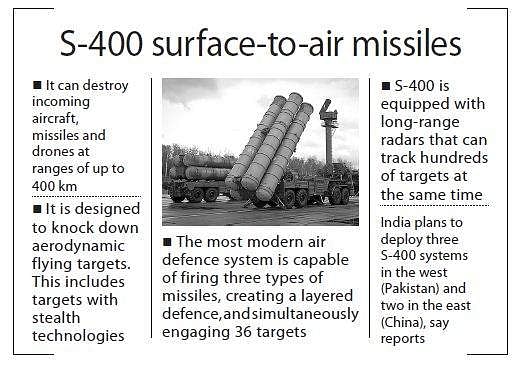 Only US, Russia and China has such capability to neutralise aerial strike of multiple targets, including ballistic missiles and stealth aircraft from a distance.Officials claim that estimated cost of five units of S-400 Triumf is over $6 billion but eventually the figure will come close to $8 billion along with associated equipment and missiles from Russia. The S 400 is a unique system that incorporates four types of missiles. Carried on mobile launchers, these missiles engage targets at the following ranges — 120 km, 200 km, 250 km and 380 km. It can engage multiple targets up to a range of 400 km.

Now we are on Telegram too. Follow us for updates
TAGS
India Russia Air defence missile Deal