Dinamastre was about to go to his assistant teacher Narahari to enquire whether dalia had already been cooked for the students when S.I.-sir looking up from the register and asked, “Mastre, for how many students has dalia been cooked today?”

“For everyone, sir,” Dinamastre answered meekly. “What does that mean? Everyone means how many?” S.I.-sir asked as if he were conducting a cross-examination. “Sir, we have a hundred and twenty-three students,” Dinamastre’s voice was trembling. “But your attendance registers say only sixty-three students are present today,” said the S.I. getting irritated. He had a blackberry-sized wart between his lip and chin. Perhaps it was due to the weight of his wart that his lower lip drooped. “Eating away poor children’s food? Is it your dharma? Who will forgive you? The entry in the attendance register is sixty-three but the stock register says one hundred and twenty-three. Are you fooling me? Thieving … robbery… you are teaching this to students? Who really appointed you as a teacher?... Go and beat a drum,” S.I.-sir went on rebuking him. 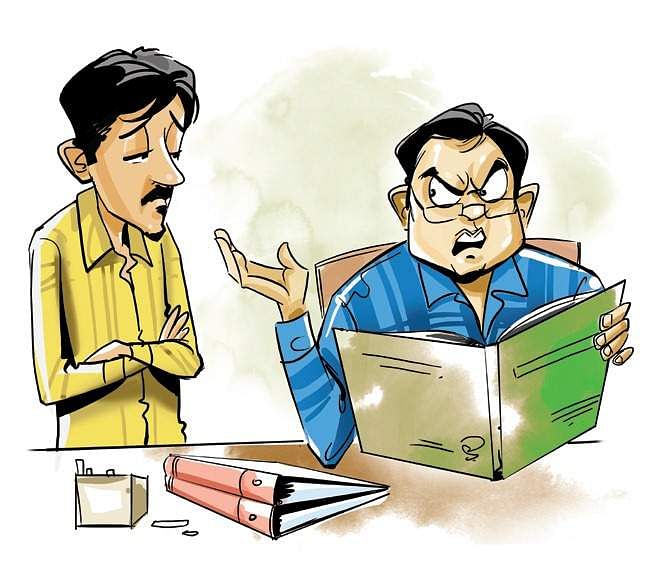 This time too Dinamastre wanted to say something but could not. His eyes became moist and his nose started to run. In his thirty years of service, no one had ever pointed a finger at him and had called him a thief or a robber. For the first time, such words had been flung at him when he was innocent of any crime.

It was true that sixty-three students had come to school today. It was also true that the stock register said one hundred and twenty-three students. But dalia for only sixty-three students had been given to the cook Raghuama to prepare. This did not mean that he, Dinamastre, was stealing the food meant for the children. He was not a thief. The truth was that in order to feed the poor children the government threw a few sacks of dalia. But to cook that dalia from where could the fuel be collected? Would the children fetch the wood missing their classes? Did the government supply the little gur or sugar that was added to the dalia or the fried chillies and onions that were sometimes mixed into the dalia? If he did not sell dalia, was he to buy these things from his own pocket? To get some money, Dinamastre sold as much dalia as was needed to buy the required fuel, gur, oil, onions, chillies, and so on.

Dinamastre’s anger rose; he was about to break down. He thought of using a few rough words to teach S.I. Panda a lesson, but he did not. He was compelled to remain silent because he knew how Makarand, the school teacher, after retiring from Kenduguda School had been suffering. That helpless old man, otherwise gentle, had been running to the block office every week. His pension papers had not been prepared because, it seems, he had once shouted at a certain S.I. or D.I. on some official matter.