His hands swinging freely at his sides, his body rocking and swaying, as he rocked and swayed his bicycle on the road to the village.

Just then, Amasa the Untouchable was seen coming from the direction of Nanjangud, riding a hired bicycle: his hands swinging freely at his sides, his body rocking and swaying, as he rocked and swayed his bicycle on the road to the village. 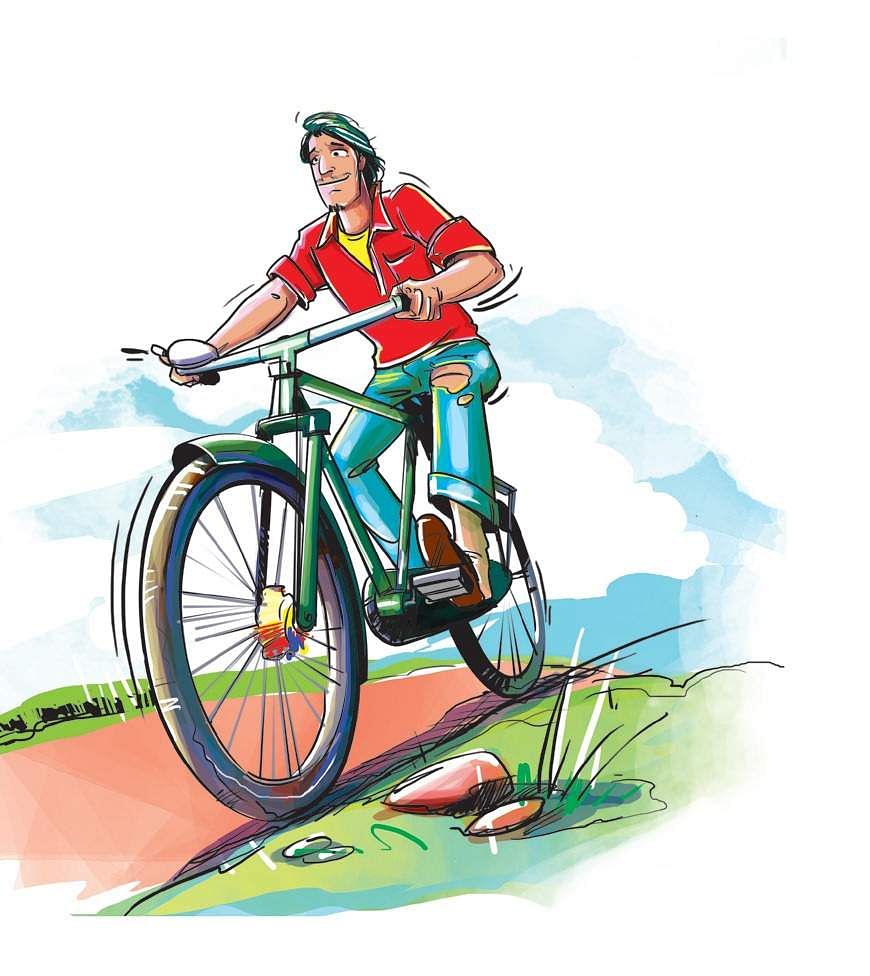 If you perchance stopped this Amasa, who grew up dancing before a tom-tom, and said, ‘What’s that?’ about the sack that hung from the handlebars, he’d most readily say, ‘… aiyee … that … only hides, budhee.’ In truth it not being hides at all but sarees put aside for that time of the month! To make a success of his trade, Amasa had learned his numbers up to a hundred, using them like astrologers would, to say with some certainty, in which village, in which house, and on what date who was going through a menstrual cycle. All said, even if the almanac from Vontikoppal that the maharajah relied on at times proved wrong, Amasa’s almanac would perhaps err by a day (nature being at fault), for all else it told the truth.

Holding on to this truth and at the hour when sleep made people drowsy, Amasa would sneak in at the place needed and lift the sarees tucked under the eaves. Blessed in this manner with a fortune in sarees, he would then vanish, leaving the women of the upper-caste colony obsessed with ritual, clueless!
This piece of work Amasa carried out with ‘honest’ effort. The self same day, disguised as a washerman, he’d reach the Nanjangud lake, wash and clean the goods so as to resell it afresh (as agreed on) to the Muslim who paid him an advance.

In the end, this line of work turned out to be less of a gamble and more profitable than wage labour, and in the event of losses (with the end of a menstrual cycle), it was most often made good with new entrants nature brought in. All said and done, it amply provided for his food, clothing, bidi, and cinema expenses — his bicycle hire too; and with the remainder, it provided rice gruel for Kuriyaiah — who lay glued to the Mari temple floor, his hungry mouth open and trustful.

Amasa zigzagging along on the bicycle, now whose eye should he catch but the eye of the one who raked in heaps of money playing cards. Knowing all too well the fickle ways of Lakshmi, the Goddess of Prosperity, looking for ways to call off the game — his eyes aflame — this one over here ground his teeth.

‘Look at him. Look! Nothing to cheer the belly, but the arrogance of that Untouchable! All this so we’ll notice him. Swaying and dancing like a snake, he is! Cut those hands off and throw them one on this side and one on the other side of the muth, and the rascal won’t hold those handlebars ever again …!’

The game is all!
Hearing him the one next to him said, ‘When you get to cut those hands of his and adorn the temple doors with one on either side, I’ll be there. Go on, now show me a good card.’
This one over here now covered those gnashing teeth with his lips; and pasting a smile over them, said, ‘I’ll give you the card you want, blighter, but face down!’ signalling the game was over.