Brace yourselves for the heat wave, this April crueler than ever before

The annual mean temperature of India has increased by approximately 1 degree Celsius as compared to the early decades of the 20th Century.

CHENNAI: April is the cruelest month, wrote T S Eliot in 1922. Long-term temperature figures released by the India Meteorological Department (IMD) indicate that the British poet would have wilted in the April of 2017.

The long-term data show that the heat spike holds true for all seasons, and indicate that the ongoing summer is not just an aberration, as the following facts show:

The annual mean temperature of India has increased by approximately 1 degree Celsius as compared to the early decades of the 20th Century.

The annual mean temperature crossed the 25 degree Celsius mark for the first time in 1995.

Into the second week of April, the alarms have already been sounded by weather mavens. The IMD has put a heat wave warning out for 15 states during the April-June period: Punjab, Himachal Pradesh, Uttarakhand, Delhi, Haryana, Rajasthan, Uttar Pradesh, Gujarat, Madhya Pradesh, Chhattisgarh, Bihar, Jharkhand, West Bengal, Orissa and Telangana. Plus: the Met sub-divisions of Marathwada, Vidharbha, Maharashtra and coastal Andhra Pradesh.

In Andhra Pradesh, where temperatures peak in mid-May, no less than 249 mandals of the state’s 670 were in the grip of either a ‘severe’ heat wave or just a garden variety heat wave. For the next two days, a heat wave warning has been issued for 473 mandals. And officials say that this year has been better than last year. Or the one before that, when 5000 people perished in the heat wave of May 2015.

In Karnataka, weather experts confirm that Aprils have become crueller than ever. G S Srinivasa Reddy, director of the Karnataka State Natural Disaster Monitoring Centre (KSNDMC), said, “This year, the average temperature has risen by 1-2 degrees C in Karnataka taking into account the average temperature of the last 30 years.” Bearing him out, 10 districts in the state have already recorded temperatures in the  41-43 degrees C range this month. Even balmy Bengaluru has inched up to 38 degrees C already.

In Tamil Nadu, the IMD forecast for the second week of April said at least 10 stations would comfortably breach 40 degree Celsius mark and intense heat conditions would prevail till April 14. Going into the second week of April, mercury levels have been steadily rising, and next week is likely to be the hottest this season so far with temperatures expected to touch 42-43 degrees Celsius in several parts of Tamil Nadu.

In Odisha, Balangir earned the state the dubious distinction of recording the highest day temperature (44 degrees C) in the country on Saturday.

Last year, mercury levels in western Odisha reached 45 degrees C by the third week of April. This year, the state is already cutting a hot pace towards that level. On Saturday, as many as 10 weather stations recorded above 40 degrees C on Saturday, with six of them breaching 42 degrees C. Day temperatures were at least three degrees above normal.

Telangana is experiencing its own dog days, having just survived a a heat spike of about 2-4 degrees C during March. Hyderabad, more used to above 40 degrees C in May, shivered in disbelief when the mercury soared over 41 degree Celsius in the first week of April.

Despite being cuddled by the Western Ghats, Kerala too is reporting a warmer ‘spring’ this April, warmer by 0.5-1 degree C. However, summer showers have given some respite even in northern Kerala, where it is not a frequent phenomenon.

Experts said the utter lack of moisture this year is fuelling the summer further. The lack of rainfall in the December-January period is one reason, met experts said. In addition, hot winds bereft of any moisture blow in from the north to south and make the peninsula sizzle. 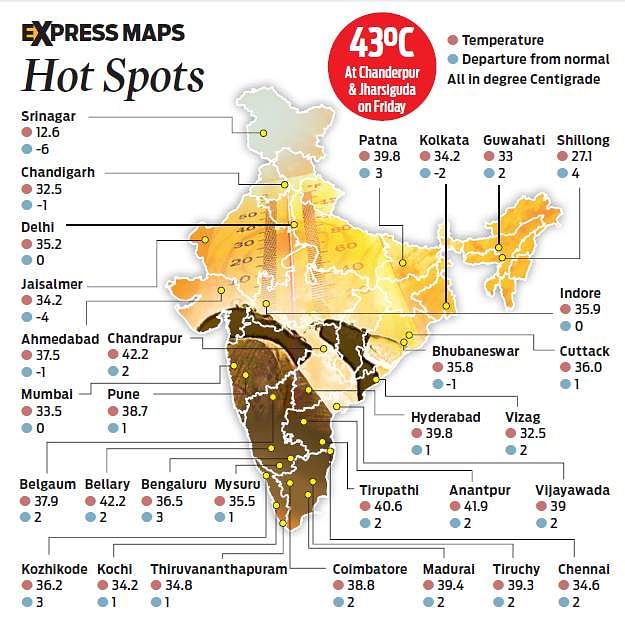 Now we are on Telegram too. Follow us for updates
TAGS
April India Meteorological Department India Summer Temperature Rise