The mishap took place at the Meerut-Saharanpur section of Delhi division of Northern Railways. Sources said some of the coaches crashed into nearby houses causing major damage to public and property.

LUCKNOW: Fourteen coaches of a high-speed Puri-Haridwar Kalinga Utkal Express jumped the rails on Saturday evening, with one of them crashing into a house adjacent to the track near Khatauli on Saturday evening, claiming at least 23 lives and leaving a large number of passengers injured.

Cracking the whip over the derailment, the Railways on Sunday night sent on leave its three top officials, including a secretary-level Railway Board official, suspended four officers and transfered one.

A senior Uttar Pradesh official on Sunday afternoon said 156 people were injured in the derailment of Utkal Express in western Uttar Pradesh. Many of the 156 injured were in a critical state, Awanish Kumar Awasthi, Principal Secretary to the Uttar Pradesh Chief Minister, said.

"A total of 156 people were injured in the Utkal Express train accident and among them many remain critical," Awasthi told PTI over the phone.

The Union railway ministry said in a release early this morning that 21 people were killed and 97 injured, 26 of them grievously, in the derailment yesterday.

Railway minister Suresh Prabhu has directed the Chairman and the Railway Board to fix responsibility on prima facie evidence by the end of the day.

READ MORE: Timeline of major train accidents in India since 1988

RELATED REPORT: 586 train accidents in last 5 years; 53 due to derailments

The accident occurred around 5.45 pm on Saturday near Khatauli town in this district, the Uttar Pradesh Police said. Khatauli is around 40 km from Muzaffarnagar.

Following the incident, trains passing on the Meerut line of the Northern Railways have been cancelled or diverted till 6 pm on Sunday.

Building on overnight search and rescue operation, the railways on Sunday deployed high-tech cranes and scores of workers to clear the tracks even as the sleepy town of Khatauli tried to come to terms with the train tragedy. Two heavy-duty 140-tonne cranes were pressed into service at the crack of the dawn to clear derailed coaches, from which the survivors were rescued and bodies pulled out till late last night.

Deepak Agarwal, Commissioner, Saharanpur Division and District Magistrate, Muzaffarnagar, G S Priyadarshi said the official figure of bodies in the mortuary was 21, while another body, of a woman, was being pulled out.

Two of the deceased have been identified as residents of Saharanpur, the district magistrate said.

Priyadarshi said 90 people were injured in the accident and most of them have been admitted at the District Hospital, Muzaffarnagar.

NDRF (National Disaster Response Force) officials said the search and rescue operations were "practically over" at the accident site with the last of the bodies presumably being pulled out from the wreckage of the coaches.

The Express train, coming from Puri, was expected to reach Haridwar at 9 pm, which is normally a journey of about 36 hours.

The coaches damaged were S1 to S10 sleeper class, third AC B1, second AC A1 coach and the pantry.

PAC, ATS and NDRF teams, as well as sniffer dog squads, were rushed to the spot. Heavyweight cranes and gas cutters were used and locals were seen helping out those engaged in rescue work.

Top police and district administrative officers, including Muzaffarnagar SSP and the district magistrate (DM) were already present on the spot. Even senior officers from National Capital Region (NCR), ambulances and doctors were also rushed to the site of the accident.

At least 10 passenger trains on the busy route were diverted following the accident, a Northern Railways release said.

Policemen on the site said one of the derailed coaches had crashed into the wall of a house adjacent to the railway track and some people are feared to be trapped in the debris.

Though no official word on the reason for the mishap was out, a team of UP ATS officials left for Muzaffarnagar to look into the cause of the major mishap.

Railway Minister Suresh Prabhu ordered an inquiry into the derailment. He said he was personally monitoring the situation and strict action will be taken in case of any lapse.

He also said restoration of the rail line where the Utkal Express had derailed was in full swing.

"All efforts being taken to ensure speedy relief and rescue operations," Prabhu said.

"Have directed Railway Doctors to visit the injured in hospitals and ensure best possible medical help."

Restoration work commenced. First coach, rerailed at 2355 hrs. My heart goes out for the families,kin of the deceased and injured.

Prabhu also tweeted that Minister of State Manoj Sinha has rushed to the spot while the Chairman of Railway Board and Member Traffic have been asked to oversee rescue and relief operations.

"LUCAS (rerailing device) from SRE reached site at 2305 hrs. A full scale ART from Delhi also reached site at 110 hrs to expedite restoration. Another Accident Relief Train (ART) along with a 140-ton crane from Ambala Division is awaited at site shortly," he tweeted.

Prime Minister Narendra Modi expressed extreme pain over the derailment and said the Railway Ministry and the state government were doing everything possible and providing all assistance required.

He said the situation was being monitored very closely by the Railways Ministry.

The ministry has been in close touch with the Uttar Pradesh government to coordinate rescue and relief operations.

While Meerut-based additional deputy general (DG) railway had rushed to the spot, ADG (Law and Order) Anand Kumar said that rescue and relief were the priority and Indian Medical Association (IMA) was also approached by the state government to mobilise hospitals and doctors of the region to attend the injured passengers.

Uttar Pradesh Chief Minister Yogi Adityanath enquired about the accident and directed ministers Suresh Rana and Satish Mahana to visit the accident site and take stock of the situation, an official spokesperson said.

Principal Secretary (Information) Avanish Awasthi said that Adityanath has announced a compensation of Rs 2 lakh for the kin of the dead and Rs 50,000 for those injured.

The chief minister has directed two of his ministers to reach the site to expedite rescue and relief operations.

More details on the rescue operations

Anand Kumar, ADG (Law and Order), said the team of AntiTerrorist Squad (ATS) will assist in the rescue measures and also look at any aspect of "sabotage".

When asked by a reporter whether there was any terror angle in the accident, state DGP Sulkhan Singh said so far there was no such information, but "UP ATS will investigate into the causes of the accident."

NDRF DG Sanjay Kumar said the rescue operations began at 8.50 pm and four teams were pressed into service. "Bodies of two males and a woman were extricated from beneath the mangled remains, while efforts were on to pull out another woman's body," he said in Khatauli.

The DG said the NDRF personnel were trying to bring back to the ground one of the coaches which had settled atop the other due to the impact of the crash, adding, "So technically the operation would be over once we put the coach back on ground."

Kumar said initially the NDRF had sent two teams from Ghaziabad but after seeing the magnitude of the tragedy two more teams were pressed into service.

Another senior NDRF official at the accident site said, "About 165 personnel, including dog-trainers, worked on the rescue operations."

Medical vans were also rushed to the site.

The Railway ministry was also in close touch with the Uttar Pradesh government to coordinate rescue and relief operations.

Meanwhile, Railways spokesperson Anil Saxena said, "Initially, we thought that it was only 4-5 coaches, now we have ascertained that 14 coaches have derailed. As of now our focus is on rescue and not on finding reasons for the accident."

Since darkness was impeding rescue operations, he said the power department officials had been directed to ensure that there was no shortage of electricity.

Kumar also said IMA chapters in Meerut zone have been alerted and asked to ensure adequate and prompt medical care to the injured.

The derailment of the Utkal Express also resulted in cancellation of three train services and diversion of six others.

According to a statement from railway ministry, the 14521/14522 Ambala-Delhi-Ambala Intercity Express, 18478 Haridwar-Puri Utkal Kalinga Express and the 14682 JalandharNew Delhi Intercity Express, which will commence journey tomorrow, stood cancelled.

Manoj Baliyan, a local resident, said he heard a massive thud and the next thing he saw was a blue railway coach flying over another coach and hit his house like a giant projectile. 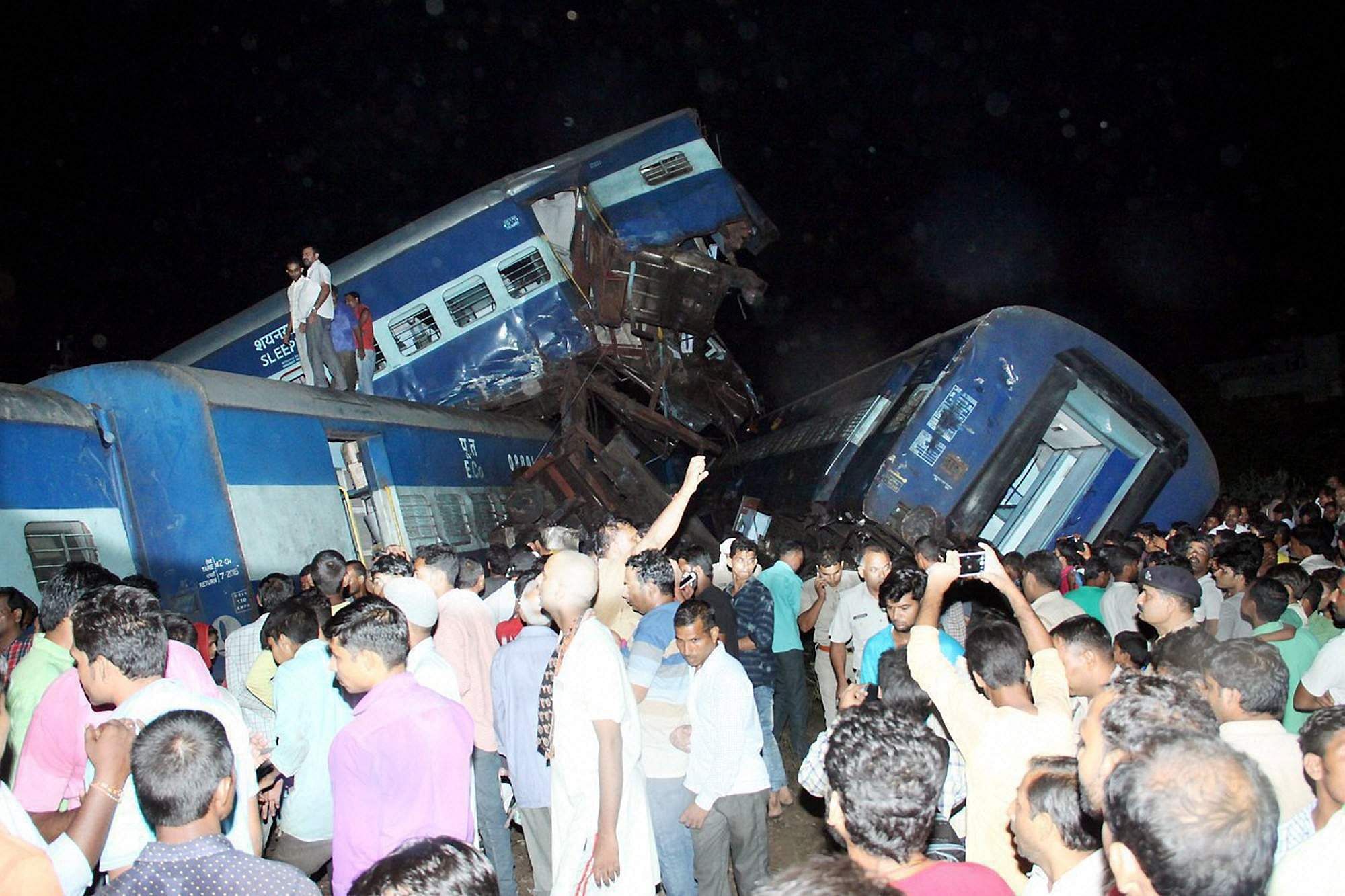 When the 42-year-old man gathered his wits all he could see was scores of bodies in front of the house, along the railway track.

"A coach had even rammed the boundary wall of a college building near our house," said Baliyan, who runs a shop in the area.

"There was a massive thud and one of the coaches flew over the pantry car and rammed our house's porch," he told PTI.

The other end of the S2 coach is resting over the pantry coach with its doors shattered.

Muzaffarnagar authorities too have set up a control room to assist families of those affected.

(With Inputs from PTI)