A region-wise analysis of how the two main parties performed in the 2017 Assembly elections in the state compared to 2012.

A region-wise analysis of how the two main parties performed in the 2017 Assembly elections in the state compared to 2012. 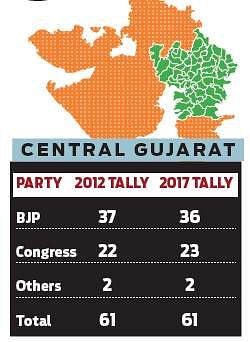 Central Gujarat is one of the regions where the party has been comfortable in terms of number of seats. Central Gujarat comprises Ahmedabad, Vadodara, Anand, Kheda, Dahod, Panchmahal and Chhota Udaipur districts and sends 61 MLAs to the Assembly. In 2012, the BJP won 37 seats from the region while the Congress managed 22. The Congress’ vote share in 2012 was 38.3 per cent while the BJP polled 52.5 per cent votes. This time, both parties have almost repeated their performance of 2012 and won 36 and 23 seats, respectively.In Ahmedabad’s Dholka, BJP’s Bhupendrasinh Manubha Chudasama defeated his Congress rival Rathod Ashvinbhai Kamsubhai by 327 votes. In Naranpura, which was earlier Amit Shah’s constituency, BJP’s Kaushik Patel trounced his Congress rival by over 65,000 votes. 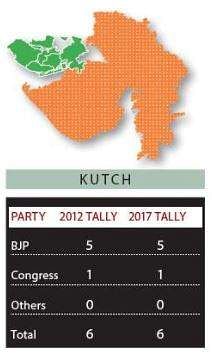 The election results clearly indicate that the BJP’s appeal among the electorate in the Kutch region of Gujarat remains undiminished. The party retained the 2012 tally, winning five of the six seats in the region. The Congress won only one Assembly seat, i.e Abdasa, in the region.While the sitting Congress MLA from Mandvi constituency Shaktisinh Gohil lost to Virendrasingh Bahadursinh Jadeja of the BJP by a margin of 9,046 votes, party candidate from Abdasa, Pradhyumansinh Jadeja, defeated his saffron rival Chhabilbhai Patel with a comfortable margin of 9,746 votes.The BJP won the remaining constituencies of Bhuj, Gandhidham, Anjar and Rapar.  In Gandhidham, BJP’s Malti Kishor Maheshwari defeated the Congress candidate by 20,270 votes.While party candidate Dr Nimaben Bhaveshbhai Acharya won from Bhuj by a margin of 14,022 votes, candidates from Anjar and Rapar, Gopalbhai Ahir and Vaghajibhai Dharambhai Patel, respectively, won by a margin of 11,313 and 9,216 votes. Ahir is BJP’s OBC face. 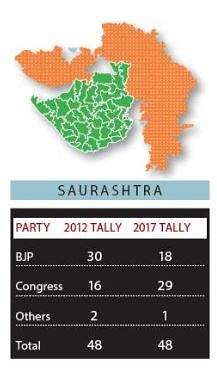 The Saurashtra region came as a huge challenge for the BJP and it was pushed to the corner in the region.Saurashtra, which sends 48 legislators, is dominated by the Patidar community, which comprises farmers, diamond merchants and industrialists.In the last two years, the community was been up in arms against the BJP over its demand for reservation in government jobs and education. The polls  the results truly reflected this as the BJP could win only on 20 seats.Patels account for about 12 per cent of Gujarat’s 60 million people and have traditionally supported the BJP. But, this time they were the reason behind the swing in votes in this region.The aggressive protests led by Hardik Patel has made sizeable dent in the support base for the party among Patidars, who dominate Saurashtra.While the BJP government denied the possibility of a separate quota for Patels citing constitutional compulsions, the Congress grabbed the opportunity and promised to look for ways to accommodate Patidars’ demands if it is voted to power. 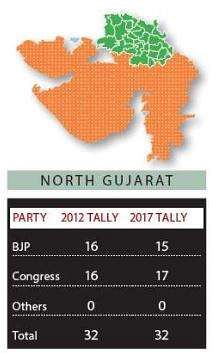 The Congress got a slight edge in North Gujarat, winning one more seat than its tally of 16 in the 2012 Assembly elections in the region.North Gujarat sends 32 MLAS to the Assembly and both the Congress and the BJP were evenly placed in 2012.  But this time, the BJP lost one seat to the Congress and had to settle for 15.North Gujarat is a Patel bastion and the entire campaigning of Rahul Gandhi and Patidar leaders like Hardik Patel was focussed on this region, but they failed to make a major dent in the BJP vote bank.This has somewhat diminished the aura of young Patidar leader Hardik, who has been harping on reservation for the Patel community.A pre-poll understanding between Hardik Patel and the Congress was reached wherein the grand old party had promised to look into providing reservation for Patels in jobs and  if the party comes to power.Deputy Chief Minister Nitin Patel, who was elected from Mehsana in 2012, retained his constituency and won by a margin of 24,000 votes. 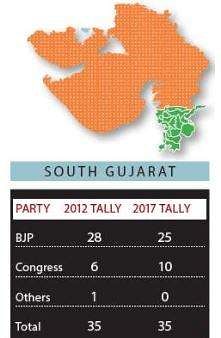 The BJP suffered a marginal loss in south Gujarat region which includes the diamond hub of Surat.
The BJP won 25 of the 35 seats in the region as compared to 28 it had won in 2012 polls. The Congress increased its count from 6 to 10. The others, who had won a single seat in 2012 polls, failed to win any seat.In 2012, the BJP had won all 12 seats in Surat and 28 of the total 35 seats in South Gujarat. The BJP retained all five seats in Surat city area and won key ones like Dangs, Valsad, Bharuch and Navsari.
In a major setback to the Congress, the Bharatiya Janata Party (BJP) has won 3 out of the 4 seats in Navsari district.The Bharatiya Janata Party bagged seats in Gandevi, Navsari and Jalalpore while the Congress settle for just one seat. The  Navsari seat, in fact, is a BJP stronghold ever since 1995.
The Bansda seat which is again a tribal seat saw the Congress win last election. Congress’s Chaudhari Chhanabhai Kolubhai had in 2012 defeated BJP’s Nareshbhai Maganbhai Patel by about 20,000 votes.