Arun Jaitley says Modi did not mean to question Manmohan’s commitment to the nation; GoP keeps powder dry for other pressing issues

NEW DELHI: The Congress party on Wednesday softened its stand that Prime Minister Narendra Modi should apologise for alleging that former prime minister Manmohan Singh colluded with Pakistan to meddle in the Gujarat polls, saying justice for Kulbhushan Jadhav, the supposed Indian spy on death row in Pakistan, was a bigger issue. 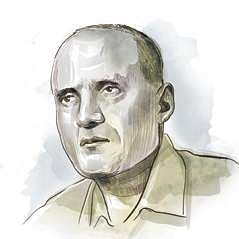 The change in the Congress party’s stand came shortly after Finance Minister Arun Jaitley said many statements had been made by different stakeholders during the Gujarat elections and that Modi did not mean to question the commitment of his predecessor in any way.

Rajya Sabha chairman M Venkaiah Naidu too told the Congress leaders that they needed to resolve the “Manmohan issue” first if the party wanted the House to take up ill-treatment of Jadhav’s family in Pakistan.

“We wanted to conclude the (Manmohan) issue. We did not want to continue this game for a longer period. If we kept on hammering this issue, we would have let go of the government on other issues thereby save it from facing questions in the House,” leader of the Opposition in Rajya Sabha Ghulam Nabi Azad said. “We are more eager to take up other issues. We would like to discuss the Kulbhushan Jadhav issue, which is nationally and internationally important,” he said.

Earlier in the day, the Congress disrupted proceedings in the Rajya Sabha as it has been doing for the past two weeks.

“Let me categorically state that the Prime Minister in his statements or speeches did not question nor did he mean to question the commitment to this nation of either Dr Manmohan Singh, the former Prime Minister, or Shri Hamid Ansari, the former Vice-President. Any such perception is completely
erroneous. We hold these leaders in high esteem as also their commitment to this nation,” said Jaitley.

Azad thanked the government and said the Congress too never said anything against PM Modi intentionally. “If during the elections any member of our party has said anything that was against the dignity of the prime minister, we disassociate with the remark,” said Azad.

After the truce over the Manmohan issue, the House functioned smoothly and took up the Indian Forest (Amendment) Bill 2017.

In between, Samajwadi Party leader Naresh Agarwal created a controversy. “If they (Pakistan) consider Kulbhushan Jadhav a terrorist, they will treat him that way. We should also treat terrorists the same way,” said Agarwal. Indian prisoners languishing in Pakistani jails.

The Rajya Sabha will debate the Jadhav case on Thursday, w 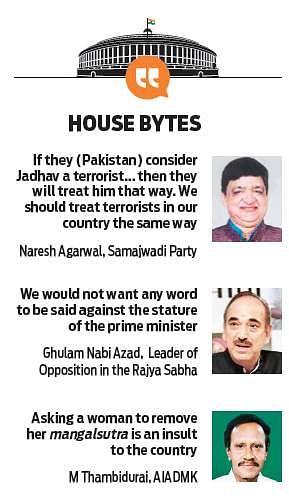 The government will make a statement in the Lok Sabha on Thursday on the treatment meted out by Pakistan to the family members of Kulbhushan Jadhav, External Affairs Minister Sushma Swaraj has said. During Zero Hour, members of various political parties strongly protested the way Jadhav’s family members were treated by Pakistani authorities when they had gone there to meet Jadhav, who is languishing in a Pakistani prison. Swaraj, who was present in the House, said a statement on the issue would be made on Thursday.

Pakistani authorities have sent the shoes worn by Kulbhushan Jadhav’s wife for forensic tests to determine the nature of the suspected foreign object, a report said on Wednesday. The autho-rities were ascertaining if the “metallic object” in the shoes was a camera or a recording chip, Pakistan Today quoted the Foreign Office (FO) as saying. Ano-ther report in Dawn said the FO confirmed a “metallic substance” was detected in her shoes that were retained by security officials prior to her meeting with the Indian death row prisoner.