Braving the cold weather, a group of visually challenged youths resorted to a ‘Jal Satyagraha’ (standing in water in protest) at Neelam Park, demanding better employment opportunities on Tuesday.

Braving the cold weather, a group of visually challenged youths resorted to a ‘Jal Satyagraha’ (standing in water in protest) at Neelam Park, demanding better employment opportunities on Tuesday. The protest began at around 8 am, when five persons under the banner of Drishtiheen Berozgar Sangharsh Samiti stepped into the cold water of the Lower Lake, where they remained until 5 pm. 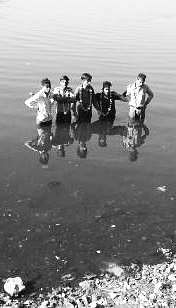 Differently abled youths from across the state have been protesting for the last ten days in Bhopal, demanding employment against vacant state government posts. The protest elicited an immediate response, with the minister of state for cooperatives, Vishwas Sarang, and the Bhopal collector holding talks with the protesters.

Bhopal road to be beautified

The Bhopal Municipal Corporation (BMC), in association with the Bhopal Smart City Development Corporation Limited, is going to beautify the stretch between Bhopal railway station and Prabhat Crossing. Under the theme, ‘Madhya Pradesh darshan’, miniature versions of tourist destinations such as Khajuraho and Sanchi will be displayed along this stretch.

This was decided during an inspection of the stretch by local MLA Vishwas Sarang, BMC commissioner Priyanka Das, and other officials. As part of the beautification, underground drains and pedestrian space will be developed along the stretch, where plantation and landscaping will also be done.

For the first time, the Union ministry of tribal affairs has organized an Aadi Mahotsav at the Bhopal Haat to celebrate tribal traditions in craft, culture, cuisine and commerce. The ongoing exhibition has received a great response from city residents. Through the exhibition, visitors can learn about the art, traditions and cultures of various Indian tribes. Tribal artisans from 27 states are participating in the exhibition. Artisans from Manipur have brought stone crockery which they say is helpful for diabetics. The stone crockery has healing properties and it cleanses and detoxifies the body and the mind, the sellers say.

The Bhopal Smart City Development Corporation Limited has installed 20 special cameras at Roshanpura Crossing and another eight at Board Office Square to check drivers who drive through red lights. These cameras are being tested and will be soon handed over to the traffic police, who will be able to automatically send fines to the traffic rule violators. The smart city company has installed two types of cameras, the automatic number plate recognition camera, and the red light violation detection camera, at the two busy crossings.

The income tax department has issued notices to 3,500 wealthy residents of Bhopal, asking them to explain their sources of income. The notices were issued on the basis of their wealth, big bank deposits, and irregularities in their tax returns for the previous fiscal. Sixty per cent of these residents have given their explanations, while ten per cent are absconding. Only three days are left to give an explanation, after which the department would slap penalties.