From #MeToo to #NotInMyName: When hashtags spearheaded protests and a call for action in 2017

When social change was just 140 characters away, people used the most of it in 2017. Here are some of the monumental moments from Twitter where hashtag took over the world.

When social change was just 140 characters away, people used the most of it in 2017. Here are some of the monumental moments from Twitter where hashtag took over the world.

The Bangalore 'mass molestation' incident drew quick criticism from people on social media and the #Notallmen vs #Yesallwomen debate went viral. Post the horrific incident, a few men started using the '#notallmen' hashtag to defend their side to which women responded back with the hashtag.

'#Yellallwomen'. Women on social media wrote that all the women have been harrassed by men at least once in their lives. Few women said that it is 'insensitive' of guys to come up with such a hashtag and deviate from the main issue.

Jallikattu was the second most trending hashtag on Twitter in 2017. It is a traditional sport practised in Tamil Nadu as a part of the Pongal festival celebrations. It got into controversy last year as animal welfare activists claimed that bulls were tortured during the sport.

Eventually, the controversy broke into huge protests which were termed as pro-Jallikattu movement, thanks to social media. The protesters took to social media to call for silent protests in Marina beach, Chennai. Protests were held around the world and they used #Jallikattu to voice their views.

Delhi University students launched the 'Save DU' campaign following protests by Akhil Bharatiya Vidyarthi Parishad (ABVP) supporters outside Ramjas College against a campus event that featured Shehla Rashid and Umar Khalid. The student activists and PhD scholars from Jawaharlal Nehru University, who were arrested on charges of sedition last year, were to be the speakers at the event. The ABVP protests turned violent.

After the violence, a social media campaign against ABVP went viral. Students opposed the violence by members of right-wing student on Social media by using Hashtag #StudentsagainstABVP ( #SaveDU was a related hashtag). 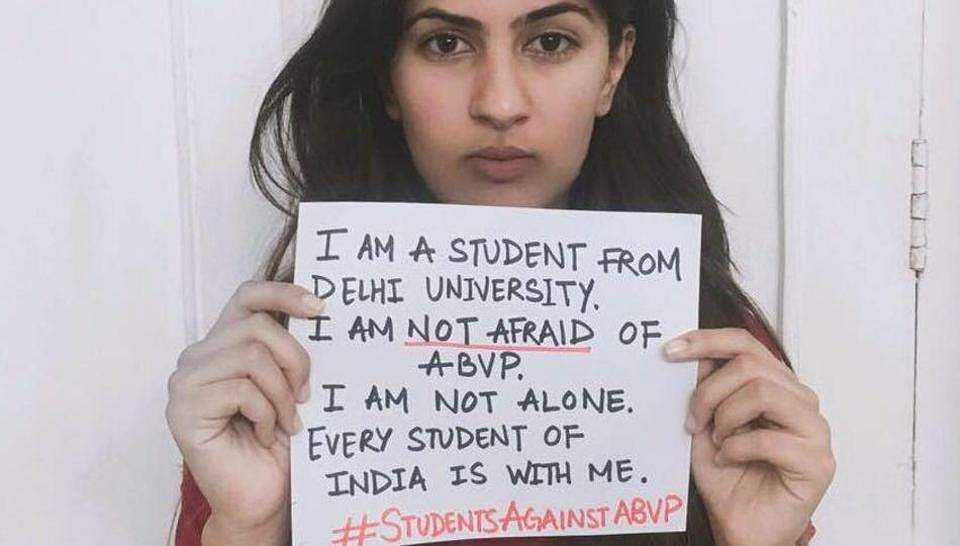 This issue got national attention when Gurmehar Kaur, 20-year-old English literature student from Delhi's Lady Shri Ram College and the daughter of an army officer who was killed in an encounter with militants in Kashmir in 1999, posted a photo of herself on social media holding a placard which read, "I am a student from Delhi University. I am not afraid of ABVP. I am not alone."

‘Not in my name’ began with a Facebook post by filmmaker Saba Dewan who urged people to voice against the lynching of Muslims and Dalits in India. The lynching of a 16-year-old boy Junaid triggered citizens, especially netizens to join the silent rally which witnessed participation from people across India. The day after the pan-India protests, PM Narendra Modi finally broke his silence and tweeted saying ‘no person in this nation has the right to take the law in his or her own hands.’

Undoubtedly 2017 will be considered as the game changer for Indian women's cricket and their performance speaks for themselves.

Cricket has always been portrayed as a male dominant game, but Mithali Raj and Co.'s sheer resilience and their amazing journey to become the runner-up of ICC Women's World Cup 2017 has put the question "Why should boys have all the fun?"

Venezuelan President Nicolas Maduro signed a controversial referendum on July 30, 2017 following which, Venezuela went into deep political, economic and social crisis. A group of Mexicans expressed their solidarity with the Venezuelans with the hashtag '#ArepaElTacoEstaContigo' (Arepa, The Taco Is With You). Arepa and Taco are the popular gastronomic icons of Venezuela and Mexico.

Varnika Kundu from Chandigarh was stalked and chased by two men in the night when she was driving back home. Following this, BJP leader Ramveer Bhatti got into a controversy after making a statement that she should've not gone out post 12 in the night. Women started a campaign called '#AintNoCindrella' and shared pictures of them staying out late in the night on social media which went viral within hours.

The hashtag was used to describe the action taken by NFL players who, prior to the start of American Football matches, knelt during the national anthem to protest against the treatment of black Americans.

It started after a Banaras Hindu University, Varanasi girl student was verbally and physically assaulted and harassed by three unidentified men inside the campus around 6 PM and University officials refused to take action against them and instead blamed the victim.

Next day, a large number of female students from the BHU campus came together to conduct a protest campaign, demanding immediate action by the university vice-chancellor against increasing cases of eve-teasing and sexual molestation in and around the campus premises.

Celebrities, activists and journalists boycotted Twitter as it suspended actress Rose McGowan's account following her tweets about Harvey Weinstein. The actress posted on Instagram, calling out to the people saying ‘be my voice’. Twitter boycott was organized to protest harassment and abuse against women on the social media platform.

This two-word hashtag campaign spread like wildfire throughout the globe to give rise to a mass level movement worldwide.

The campaign was originally created by Tarana Burke, a social activist, in 2006 on the social media platform, My Space. The movement gained momentum with actress Alyssa Milano’s tweet on October 15 which read, ‘If all the women who have been sexually harassed or assaulted wrote ‘Me too’ as a status.’ To her surprise, she woke up next morning to tweets from tens of thousands women who took up the ‘Me Too’ hashtag.

The campaign started in the wake of sexual harassment and rape allegations against Hollywood producer Harvey Weinstein.  The hashtag has been shared 4.3 million times all over the world.

#MeToo also gains significance as the Time magazine named the women and men behind the movement as the person of the year.

Soon after the results of American Presidential election was announced, the '#NotMyPresident' hashtag went viral on Twitter as Donald Trump's critics expressed their displeasure over his victory. Minutes after the results were announced, it became the top trending hashtag on social media.

It was the most hyped event of 2017 primarily due to the presence of Ivanka Trump, the daughter of US President Donald Trump. The theme of the three-day long event was "Women's First, Prosperity to All".

It must be noted that it was the first time Global Entrepreneurship Summit was held in Asia and Hyderabad was chosen to host this prestigious event and was inaugurated by our Honourable PM Shri Narendra Modi.