LUCKNOW: It was a political coup of sorts, as Uttar Pradesh Chief Minister Akhilesh Yadav was crowned as the Samajwadi Party’s national president on Sunday, a post that has been held by his father Mulayam Singh Yadav for decades.

While appointing Akhilesh to the post, the party’s national convention, called by Ram Gopal Yadav who was expelled from the party by Mulayam, also stripped Shivpal Yadav of the state chief post and sacked its national general secretary Amar Singh. Mulayam Singh Yadav, who was given the honorary title of party patron, called the move unconstitutional.

The announcements added fuel to the already raging fire, triggering a spate of dismissals by both the warring camps. Soon after being anointed, Akhilesh appointed Naresh Uttam, a veteran Samajwadi, as the party’s State chief in the place of Shivpal Yadav.

This was met with swift retaliation by Mulayam, who sacked Ram Gopal Yadav yet again for six years. Two other senior leaders, Naresh Agarwal and Kironmoy Nanda were also sacked by Mulayam for attending the national convention.

Terming Sunday’s convention as ‘illegal’ and ‘unconstitutional’, Mulayam called another meeting of the party’s national executive on January 5.

“When we will return to power in the State with an unprecedented mandate,” Akhilesh said. “I know, Netaji will be the happiest person. With just two-three months of this government remaining, this was a dangerous situation, so we took the party reins in our own hands,” he said, adding the decision was crucial as he feared that the elements surrounding ‘Netaji’ could make him sign on anything in the melee by misguiding him. 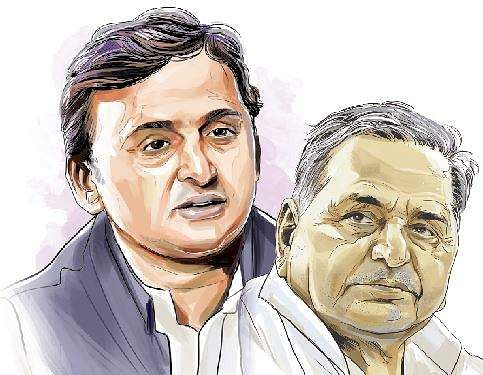 In the absence of Mulayam, the convention was chaired by the party’s national vice-president Kironmoy Nanda. A majority of leaders - old and new - including the likes of Rewati Raman Singh, Beni Prasad Verma, Ahmad Hassan and Naresh Agarwal along with the entire youth brigade and a majority of district presidents were present at the meet.

“Two persons in the party have been acting against Akhilesh Yadav as they do not want him to return to power as chief minister even when his victory is imminent,” said Ram Gopal.

The Akhilesh camp has already sent the Election Commission all the three resolutions passed at the party’s national convention.

Sometimes to protect the ones you love you must make the right decision. What I did today was a tough decision but one that I had to take. pic.twitter.com/M5xZYEZhii

“Things will become clear after the January 5 meet,” he said. After the passage of resolutions in the morning at the SP national convention, Akhilesh also targeted the “two persons” for destroying the party. “With just two-three months of this government remaining, this was a dangerous situation. So we took the party reins in our own hands,” he told his supporters.

“Netaji (Mulayam) will always remain the party mentor. He will continue to guide all of us,” the chief minister said. “No one can undermine this father-son relationship. It will always be there and I take this pledge to save Netaji’s pride at any cost,” he said.