The 16-year old Kashmiri's meeting the CM has attracted the attention of trolls all over social media.

Zaira Wasim, the girl who portrays the now famous character of younger Geeta Phogat in the wrestling bioipic 'Dangal', is now embroiled in the controversy for meeting Jammu and Kashmir (J-K) chief minster (CM) Mehbooba Mufti.

Despite the warm exchange of greetings, the 16-year old Kashmiri's meeting the CM has attracted the attention of trolls all over social media. This has forced the 16-year-old to apologise on social media, with a clarification that she did not want "anyone to follow in my foot steps or even consider me as a role model".

In an FB post, Zaira publicly apologized to all those who were offended by her meeting with the CM. She takes an emotional tone saying, "I hope people still remember that I'm a just a 16-year-old girl and I hope you treat me accordingly." 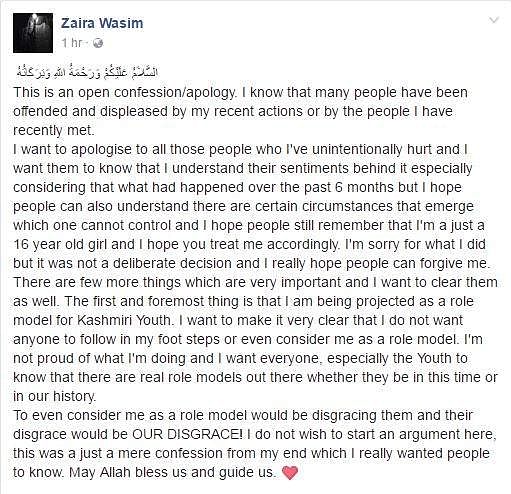 Watch the video of her meeting with Mehbooba below:

Ever since its release on December 23, Dangal has crossed over Rs 345 cr and has won the title of the highest grossing Hindi film. Recently at the 62nd Filmfare Awards, it won several accolades including three top awards for Best Film, Best Director (Nitesh Tiwari) and Best Actor (Aamir Khan).

Now we are on Telegram too. Follow us for updates
TAGS
facebook Mehbooba Mufti Dangal Aamir Khan Zaira Wasim