According to reports, the ship MV Henry, was apprehended by Ship Samudra Pavak, a pollution control vessel of the coast guard.

MUMBAI: In the biggest ever drugs seizure along the Indian coast, the coast guard, in a joint operation with Intelligence Bureau (IB) and local police, apprehended a Panamanian ship carrying 1500 kg of heroin valued at Rs 3,500 crore off the Gujarat coast, on Sunday.

As per reports, the ship MV Henry, was apprehended by Ship Samudra Pavak, a pollution control vessel of the coast guard.

Sources said, three days back, the coast guard received information from intelligence sources that a big consignment of narcotic drugs was likely to enter Mumbai via Gujarat. 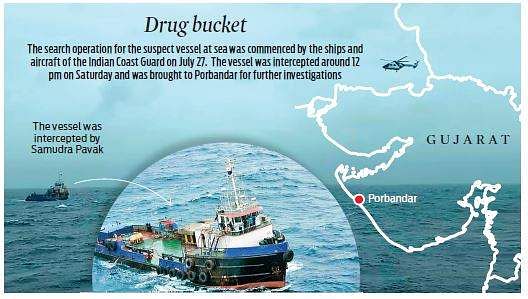 According to the defence spokesperson, while patrolling in the area, Coast Guard ship Samudra Pavak intercepted a merchant vessel on the basis of an intelligence input.

"The Indian Coast Guard ship 'Samudra Pavak' intercepted and apprehended a merchant vessel carrying approximately 1,500 kg of heroin.. valued at around Rs 3,500 crore, from a merchant's vessel off the Gujarat coast, a defence spokesperson said in a statement released on Sunday afternoon.

"Based on intelligence inputs, the vessel was intercepted at around 1200 hrs yesterday. This is the largest single haul of narcotics seized till date," the statement said. 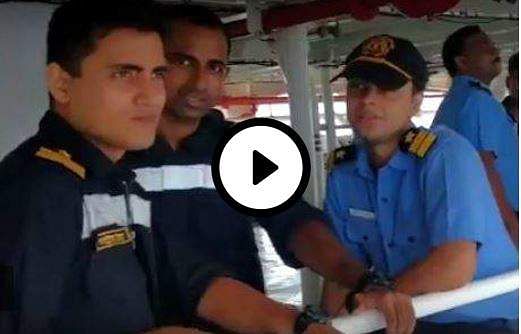 Accordingly, a fishing trawler MV Henry was kept under surveillance and was raided on Sunday off the Gujarat coast, the sources have said.

EXPLAINER: Why is Panama the go to place for registering ships?

The vessel, which was found to be registered in Panama, had eight crew members onboard and no cargo. It said it was headed to Bhavnagar for breaking at the Alang yard when intercepted by the ICG ship in the Gulf of Khambat. The claims were denied by the Gujarat Maritime Board, the ICG said.
The development comes three days after the ICG was mobilised on intelligence input that an Iranian vessel Prince-II, carrying large amount of narcotics (heroin and chitta), was likely to enter Bhavnagar (Gulf of Khambat) or Jamnagar (Gulf of Kutch) in disguise. “Based on intelligence inputs, the vessel was intercepted at around 1200 hrs yesterday. This is the largest single haul of narcotics till date,” claimed the statement.

The vessel has been taken to Porbandar, and crew members have been detained for interrogation in the presence of intelligence agencies, police, customs, enforcement, narcotics, and the navy. Considered as the most crucial coast belt, Coast Guard has stepped up security across the 1,600-km long Gujarat coastline with deployment of patrolling vessels and Dorniers for aerial surveillance.

This is the second instance in two months that a Panama-registered ship has been embroiled in controversy. On June 13, Amber-L, another Panamanian-registered ship, hit a fishing vessel off the Kochi coast killing two fishermen.

Considered as the most crucial coast belt, Coast guard has stepped up security across the 1,600-km long Gujarat coastline with the deployment of patrolling vessels and Dorniers for aerial surveillance. On December 31, 2014, a ‘hostile’ boat from Karachi, Pakistan, was intercepted by ICG about 365 km off the Porbandar coast, before the occupants set ablaze the vessel that later sank with them.

Now we are on Telegram too. Follow us for updates
TAGS
Drugs Heroin Indian Coast Guard Panamian ship